Messiah College is a private Christian college of the liberal arts and applied arts and sciences located in Grantham, Pennsylvania, near the capital city of Harrisburg. Messiah's mission is to "educate men and women toward maturity of intellect, character, and Christian faith in preparation for lives of service, leadership, and reconciliation in church and society." [2] 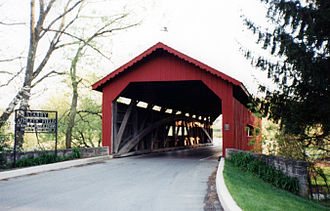 Messiah College was founded in 1909 by the Brethren in Christ Church, and was originally called Messiah Bible School and Missionary Training Home. Originally located in Harrisburg, Pa., in the home of Messiah's first president, Samuel Rogers (S.R.) Smith, a local businessman and leader in the Brethren in Christ Church, the school was moved to the village of Grantham in 1911 following the construction of the campus' first building, Old Main. The building was constructed on land donated by S.R. Smith, who had moved his home and various business interests outside of the city to allow for growth in the farmlands surrounding Grantham. In the early years, the school offered a high school curriculum and several Bible programs. By 1921 it had also become a junior college, making it the second junior college in Pennsylvania, and changed its name to Messiah Bible School.[3]

Even though it is no longer owned by the Brethren in Christ Church, Messiah continues to be influenced by its traditions primarily in the Anabaptist, but also the Pietist and Wesleyan holiness movements. Today, Messiah College is a nondenominational Christian college, with a faith base that is broadly evangelical and includes students and employees from a variety of denominations and Christian faith traditions.[5]

Other Key Points in Messiah's History

Messiah College offers more than 60 majors and pre-professional programs[10] in four schools: the School of the Arts; the School of Business, Education and Social Sciences; the School of Science, Engineering and Health; and the School of the Humanities. In addition to major requirements, there is a general education curriculum, required for all students. General education requirements include but are not limited to theology courses, a philosophy, a literature, a social science, an art course, a world views class, physical education courses, first year and senior seminars, and a comprehensive first-year seminar course added in 2009 called Created and Called for Community.

Messiah College awards Bachelor of Arts and Bachelor of Science degrees in the liberal and applied arts and sciences. Specialized programs include extensive off-campus study, individualized majors, independent study, service-learning, internships, allied health programs in partnership with other institutions[11] and a College Honors Program.[12] Some majors allow students to graduate one or two semesters early, depending on their particular field of study.[13]

Messiah College uses the 4-1-3 academic calendar system where the academic year is divided into Fall, January, and Spring Terms. The January Term, or J-Term, is a three-and-a-half-week period where students can choose to take one or two courses intensively, participate in a cross cultural study program, sign up for the popular Skiing and Snowboarding class, or simply stay home for an extended vacation.

In 1963 the College was accredited by the Middle States Association of Colleges and Secondary Schools.[19] Academic programs in engineering, dietetics, nursing, athletic training, music, social work, education, theatre and business are each accredited by professional associations.

Messiah College has a nationally recognized network of programs through which students can study abroad. In 2010, Messiah College was ranked 7th among all undergraduate institutions in the country that send students to study abroad by the Institute for International Education's Open Doors Report. In 2009-2010, more than 400 Messiah students earned academic credit by studying abroad in more than 40 different countries.[20]

Cross-cultural courses are offered during January and May terms. These trips are led by faculty members and students earn credits by participating in an intense three-week study of a particular geographic region or culture. Messiah College students can also participate in the International Business Institute (IBI), an overseas program in international economics and business designed to give students an opportunity to integrate academic study with international field experience. Students who travel with IBI during the summer visit corporate headquarters, manufacturing plants, and government and international agencies in Europe, India, and China. Students can also work in a variety of fields--including the arts, politics, and health care--through an international internship partnership with Arcadia University. Students also have the opportunity to design their own international internship at the location of their choice in partnership with the College's Internship Center.http://www.messiah.edu/departments/globalization/world.html

The Messiah College Falcons compete in NCAA Division III athletics with 22 different intercollegiate athletic teams. Messiah is a member of the Middle Atlantic Corporation and is sponsored by Nike, Inc.

The women's field hockey team has appeared in the NCAA division III final four twelve times, making four of these appearances in the past five seasons.[21]

The Messiah College mascot is the Falcon, which was given the name Fandango in 2006.[22]

Messiah is ranked by US News & World Report as the third best school in the nation for soccer fans.[24]

Students at Messiah College are required to sign a Community Covenant upon entering. The document states that every person is created in the image of God, and that there are certain responsibilities of living in community that must also be assumed in relation to God, others, and his creation.

First and foremost, the Community Covenant affirms belief in God and the Bible. Specifically, the Community Covenant requires commitment to academic integrity, responsible decision making in light of Christian values, and balancing personal freedom with concern for others. Practically, the Covenant bans both on- and off-campus the use of illegal drugs, alcohol, and tobacco as well as gambling, profanity, "occult practices", sexual intercourse outside of marriage, and homosexual behavior. It also prescribes the avoidance of drunkenness, stealing, and dishonesty. The Covenant also prohibits certain attitudes, such as greed, lust, and jealousy, but allows that these attributes are typically expressed less outwardly.

The text of the Covenant can be found on Messiah College's website.

The college's stance on homosexuality, as stated in the Community Covenant, has been a source of contention and controversy amongst the student body, administration, and alumni. A number of articles have been published concerning the issue in the college's student newspaper, the Swinging Bridge.[26][27][28][29]

An alumni group, Inclusive Alumni, has formed in support of Isaiah Thomas, aiming at changing the college's policy.[30] Isaiah Thomas was a student who decided to transfer out of Messiah in May 2011, after claims of harassment by students and also a professor. He also claims he received a death threat via Facebook. The college followed up on his claims, but has refused to change its policy.

Related to this issue, Messiah College President Kim Phipps sent a statement to college employees and alumni that read in part, "There has been much attention given to Messiah’s Community Covenant’s stance on homosexual behavior in recent media accounts, some of it more accurate and contextual than others. However, an equally important part of our Community Covenant emphatically states the importance of each person, that individuals are to be valued and respected because all human beings are created in God’s image. In its May 10 editorial, the “Patriot-News” called Messiah’s goal on this issue “admirable,” and notes that the College is “trying to be a bridge between two parts of society who rarely even talk to one another, let alone have a meaningful conversation.”[31] My hope and prayer for the Messiah College community is that we will reflect the love of Christ to one another and to our neighbors even in the midst of difficult conversations and challenges.[32]

The mission of Chapel reads:

"Chapel at Messiah College is a central expression of our identity as a community of Christians with a deep commitment to spiritual growth and academic excellence.

In chapel we seek to nurture holistic Christian faith through:

Students are required to attend 24 chapel services each semester. Each student is required to have twelve common chapels, however the rest of the necessary 24 can be fulfilled through alternate chapels on a variety of different topics ranging from discussion forums to videos to special speakers.

Messiah's model of spiritual formation is based on faithful acts of knowing, being, and doing as Christians.[34]

Students at Messiah College can spend their free time playing in intramural sports leagues, participating in various clubs, watching on-campus movies, and hanging out at local diners, among other things. Underclassmen also participate in floor activities organized by their RAs. The Student Government Association funds 40+ organizations on campus that aim at providing for a co-curricular atmosphere conducive to a holistic education and enjoyable experience while enrolled at both Grantham and Philadelphia campuses. The S.G.A. also provides students with unique access towards influencing governance and overall institutional prerogatives.

Messiah College has, over the years, accumulated a number of traditions. One of the oldest traditions is known as "creeking". This tradition started out as a way of congratulating male students who had recently gotten engaged. The student would be taken to the nearby Yellow Breeches Creek by his friends and thrown in. It is also common for people to be "creeked" on their birthdays.[35] The tradition has been extended to the female population.

The Compassion Forum was a question-and-answer session in which CNN commentators Jon Meacham and Campbell Brown as well as select members of the audience posed questions about Faith and Politics to Democratic political candidates Hillary Clinton and Barack Obama.[36] The Forum took place at Messiah College, in Grantham, Pennsylvania on April 13, 2008 and was given live national coverage by CNN.[37] The event was organized by the religious organization Faith in Public Life. John McCain was offered an invitation to participate in the event, but declined the invitation, citing a schedule conflict.

Following the US Justice Department Scandal in which Messiah College alumna Monica Goodling was intimately involved, several members of the media ridiculed Messiah College. Jon Stewart on The Daily Show referred to Messiah as a school "where people have faith that they'll receive a quality education, and yet somehow it never arrives,"[38] and "that everyone in the God business knows is a 'savior school'.[39] Bill Maher focused his satirical criticism on Goodling's legal education education at Regent University, but also mocked Messiah, calling it "the home of the Fighting Christies."[40]