The Old City (Hebrew: העיר העתיקה‎, Ha'Ir Ha'Atiqah, Arabic: البلدة القديمة‎, al-Balda al-Qadimah, Armenian: Հին Քաղաք, Hin K'aghak' ) is a 0.9 square kilometers (0.35 sq mi) walled area[3] within the modern city of Jerusalem. Until 1860, when the Jewish neighborhood, Mishkenot Sha'ananim, was established, this area constituted the entire city of Jerusalem. The Old City is home to several sites of key religious importance: the Temple Mount and its Western Wall for Jews, the Church of the Holy Sepulchre for Christians, and the Dome of the Rock and al-Aqsa Mosque for Muslims.

Traditionally, the Old City has been divided into four uneven quarters, although the current designations were introduced only in the 19th century.[4] Today, the Old City is roughly divided into the Muslim Quarter, the Christian Quarter, the Jewish Quarter and the Armenian Quarter. Following the 1948 Arab-Israeli War, the Old City was occupied by Jordan and the Jewish residents were evicted. During the Six Day War in 1967, which saw hand to hand fighting on the Temple Mount, Israel occupied the Old City alongside the rest of East Jerusalem. Today, Israel controls the entire area.

In 1980, Jordan proposed the Old City to be inscribed on the UNESCO World Heritage Site List.[5] It was added to the List in 1981.[6] In 1982, Jordan requested that it be added to the List of World Heritage in Danger.[7] In 2011, UNESCO issued a statement reiterating that it views East Jerusalem to be "part of the occupied Palestinian territory, and that the status of Jerusalem must be resolved in permanent status negotiations."[8]

In 2010, Jerusalem's oldest fragment of writings was found outside of the Old City's walls.[9]

According to the Bible, before King David's conquest of Jerusalem in the 11th century BCE the city was home to the Jebusites. The Bible describes the city as heavily fortified with a strong city wall. The city ruled by King David, known as Ir David, or the City of David, is now believed to be southwest of the Old City walls, outside the Dung Gate. His son King Solomon extended the city walls and then, in about 440 BCE, in the Persian period, Nehemiah returned from Babylon and rebuilt them. In 41-44 CE, Agrippa, king of Judea, built a new city wall known as the "Third Wall."

Muslims occupied Jerusalem in the 7th Century (637 CE) under the second caliph, Umar Ibn al-Khattab who annexed it to the Islamic Arab Empire. He granted its inhabitants an assurance treaty. After the siege of Jerusalem, Sophronius welcomed `Umar because, according to biblical prophecies allegedly known to the church in Jerusalem, "a poor, but just and powerful man" will rise to be a protector and an ally to the Christians of Jerusalem. Sophronius believed that `Umar, a great warrior who led an austere life, was a fulfillment of this prophecy. In the account by the Patriarch of Alexandria, Eutychius, it is said that `Umar paid a visit to the Church of the Holy Sepulchre and sat in its courtyard. When the time for prayer arrived, however, he left the church and prayed outside the compound, in order to avoid having future generations of Muslims use his prayer there as a pretext for converting the church into a mosque. Eutychius adds that `Umar also wrote a decree which he handed to the Patriarch, in which he prohibited that Muslims gather in prayer at the site.[10] In 1099 Jerusalem was captured by the Western Christian army of the First Crusade and remained in their hands until recaptured by the Arab Muslims led by Saladin, on October 2, 1187. He summoned the Jews and permitted them to resettle in the city. In 1219 the walls of the city were razed by Mu'azzim Sultan of Damascus; in 1229, by treaty with Egypt, Jerusalem came into the hands of Frederick II of Germany. In 1239 he began to rebuild the walls; but they were again demolished by Da'ud, the emir of Kerak. In 1243 Jerusalem came again under the control of the Christians, and the walls were repaired. The Kharezmian Tatars took the city in 1244 and Sultan Malik al-Muattam razed the city walls, rendering it again defenseless and dealing a heavy blow to the city's status.

The current walls of the Old City were built in 1538 by the Muslim Ottoman Empire Sultan Suleiman the Magnificent. The walls stretch for approximately 4.5 kilometres, (2.8 miles), and rise to a height of 5–15 metres, (16–49 feet), with a thickness of 3 metres, (10 ft).[11] Altogether, the Old City walls contain 43 surveillance towers and 11 gates, seven of which are presently open. 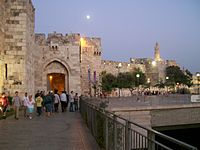 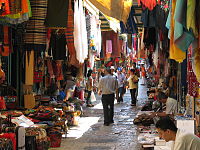 The Muslim Quarter (Arabic: حارة المسلمين‎‎, Ḩārat al-Muslimeen) is the largest and most populous of the four quarters and is situated in the northeastern corner of the Old City, extending from the Lions' Gate in the east, along the northern wall of the Temple Mount in the south, to the Damascus Gate route in the west. Its population was 22,000 in 2005. Like the other three quarters of the Old City, the Muslim quarter had a mixed population of Jews as well as Muslims and Christians until the riots of 1929.[12] Today 60 Jewish families live in the Muslim Quarter,[citation needed] and a few yeshivot are located there. The main one is Yeshivat Ateret Cohanim.

The Christian Quarter (Arabic: حارة النصارى‎‎, Ḩārat an-Naşāra) is situated in the northwestern corner of the Old City, extending from the New Gate (see below) in the north, along the western wall of the Old City as far as the Jaffa Gate, along the Jaffa Gate - Western Wall route in the south, bordering on the Jewish and Armenian Quarters, as far as the Damascus Gate in the east, where it borders on the Muslim Quarter. The quarter contains the Church of the Holy Sepulchre, one of Christianity's holiest places.

The Armenian Quarter (Armenian: Հայկական Թաղամաս, Haykakan T'aġamas, Arabic: حارة الأرمن‎, Ḩārat al-Arman) is the smallest of the four quarters of the Old City. Although the Armenian people are Christians, the Armenian Quarter is distinct from the Christian Quarter. Despite the small size and population of this quarter, the Armenians and their Patriarchate remain staunchly independent and form a vigorous presence in the Old City. After the 1948 Arab-Israeli War, the four quarters of the city came under Jordanian control. Jordanian law required Armenians and other Christians to “give equal time to the Bible and Qur'an” in private Christian schools, and restricted the expansion of church assets. The 1967 war is remembered by residents of the quarter as a miracle, after two unexploded bombs were found inside the Armenian monastery. Today more than 3,000 [13][14] Armenians live in Jerusalem, 500 of them in the Armenian Quarter. Some are temporary residents studying at the seminary or working as church functionaries. The Patriarchate owns the land in this quarter as well as valuable property in West Jerusalem and elsewhere. In 1975, a theological seminary was established in the Armenian Quarter. After the 1967 war, the Israeli government gave compensation for repairing any churches or holy sites damaged in the fighting, regardless of who caused the damage. 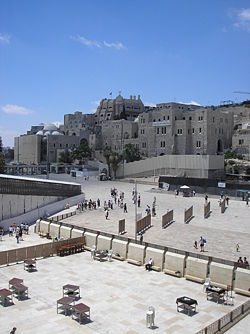 The Jewish Quarter (Hebrew: הרובע היהודי‎, HaRova HaYehudi, known colloquially to residents as HaRova, Arabic: حارة اليهود‎, Ḩārat al-Yahūd) lies in the southeastern sector of the walled city, and stretches from the Zion Gate in the south, along the Armenian Quarter on the west, up to the Cardo in the north and extends to the Western Wall and the Temple Mount in the east. The quarter has had a rich history, with a nearly continual Jewish presence since the eighth century BCE.[citation needed] In 1948 its population of about 2,000 Jews was besieged, and forced to leave en masse.[15] The quarter was completely sacked by the Arabs, with ancient synagogues destroyed.

The quarter remained under Jordanian control until its capture by Israeli paratroops in the Six-Day War of 1967. A few days later, Israeli authorities ordered the demolition of the adjacent Moroccan Quarter, relocating all of its inhabitants, in order to facilitate public access to the Western Wall.

The section of the Jewish quarter destroyed prior to 1967 has since been rebuilt and settled, and has a population of 2,348 (as of 2004),[16] and many large educational institutions have taken up residence. Before being rebuilt, the quarter was carefully excavated under the supervision of Hebrew University archaeologist Nahman Avigad. The archaeological remains are on display in a series of museums and outdoor parks, to visit which tourists descend two or three stories beneath the level of the current city. The former Chief Rabbi is Rabbi Avigdor Nebenzahl, and current is his son Rabbi Chizkiyahu Nebenzahl who is on the faculty of Yeshivat Netiv Aryeh situated directly across from the Kotel. 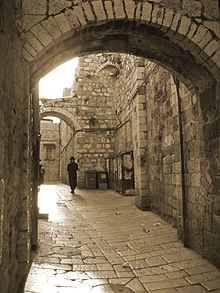 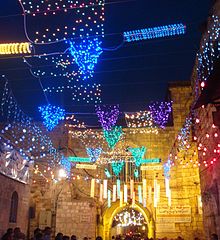 During the era of the crusader Kingdom of Jerusalem, there were four gates to the Old City, one on each side. The current walls, built by Suleiman the Magnificent, have a total of eleven gates, but only seven are open. Until 1887, each gate was closed before sunset and opened at sunrise. As indicated by the chart below, these gates have been known by a variety of names used in different historic periods and by different community groups.