Norway in the Eurovision Song Contest

Norway in the Eurovision Song Contest

Norway has been participating in the Eurovision Song Contest since 1960 and only been absent twice: in 1970, when they boycotted the contest over disagreements about the voting structure, and in 2002, when they did not qualify.

Norway won the contest in 2009, having previously won twice, in 1985 with Bobbysocks' performance of "La det swinge" (Let It Swing) and in 1995 with Secret Garden's mainly instrumental, Celtic-influenced ethno-piece "Nocturne". Despite these successes, the country also holds the unfortunate distinction of having scored the most "nul points" (zero points) in competition history, namely four times. They have also come last ten times, which is also a record. In 2009, it set itself three more records of which to be far more proud, when it claimed the 2009 title with the most votes in Eurovision history winning 387 points, getting the highest amount of twelve points in single contest and the having the biggest gap between first and second place.

Since the introduction of the semi-final round in 2004, Norway's highest placing was Alexander Rybak's first place in the 2009 contest. Their next best finish was in the 2008 contest, where Maria Haukaas Storeng performed the song "Hold On Be Strong", which came in 5th. 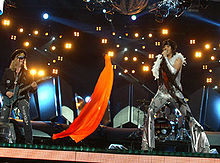 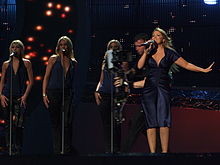 Maria Haukaas Storeng performing "Hold On Be Strong" at Belgrade (2008) 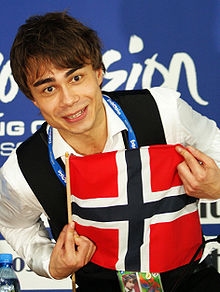 Didrik Solli-Tangen performing "My Heart Is Yours" at Bærum, Oslo (2010)

Norway has given the most points to...

Norway has received the most points from...

NOTE: The totals in the above tables include only points awarded in Eurovision finals, and not the semi-finals since 2004.

Since introducing the semi-finals in 2004

Norway has given the most points to...

Norway has received the most points from...

NOTE: The tables with points from 2004 include points awarded in both finals and semi-finals where the highest point from the final/semi-final is picked.