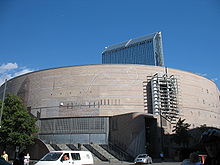 Coordinates: 59°54′46.6″N 10°45′16.7″E﻿ / ﻿59.912944°N 10.754639°E﻿ / 59.912944; 10.754639 Oslo Spektrum is an indoor multi-purpose arena in east central Oslo, Norway. It opened in December 1990. It is currently owned and operated by Norges Varemesse (Norway Trade Fairs),[citation needed] who also own and operate the Norges Varemesse conference center in Lillestrøm which is Norway's largest conference center.[citation needed] Oslo Spektrum is primarily known for hosting major events such as the Nobel Peace Prize Concert, Eurovision Song Contest, and concerts by artists of national and international fame.

Oslo Spektrum was part of a large-scale redevelopment of the formerly industrial Grønland/Vaterland area. It was designed by LPO Arkitektkontor AS, and its exterior walls were decorated with ceramic tiles containing fragments of prints by the artist Rolf Nesch. Since this artist died in 1975, permission was obtained from his living relatives, and the decorating was supervised by painter Guttorm Guttormsgaard and ceramic artist Søren Ubisch. In 2004 Oslo Spektrum was awarded the Oslo City Council's award for outstanding architectural achievement.[citation needed] At the time of opening it was Norway's largest indoor arena, with a capacity of 9,700 at concerts and 6,500 during sporting events). It has since been expanded several times. In Greater Oslo both Valhall Arena (capacity 13,000 for concerts/4,000 for sporting events) and Telenor Arena (capacity 25,000/15,000) provide larger venues.[citation needed] Oslo Spektrum was conceived as a multi-purpose arena although it was intended primarily for ice hockey. In this capacity it was intended as the home of both Vålerenga Ishockey and Furuset Ishockey, but this did not work out as expected and the venue was soon left to rely on other means of generating revenue.

One of Oslo Spektrum's prime attributes is its location in the middle of Downtown Oslo, next to the Central Station, long and medium haul bus terminal, Jernbanetorget public transportation hub and only a short distance from international ferry terminals. This makes it easily accessible and minimizes traffic problems when crowds arrive at events and disperse afterwards, which has been an issue with other venues such as the more remotely located Telenor Arena.[citation needed] 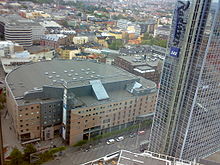 Oslo Spektrum (left, next to the Oslo Plaza tower building)

Designed from the outset to be flexible and in line with international standards for sporting events and concerts, Oslo Spektrum can accommodate almost any type of entertainment show or sports event that can fit inside.[citation needed] It has built-in ice making facilities, and while it is rarely used for ice hockey nowadays, it regularly hosts ice shows like Walt Disney's World on Ice.[citation needed] It also hosts the Norwegian Handball Championships, for a period becoming Norway's largest handball arena.[citation needed] Other notable events that are regularly held here include the Nobel Peace Prize Concert, Norwegian Idol finals, Spellemannsprisen (Norwegian music awards), and the Oslo Horse Show. Currently, Spektrum hosts a total of 100 events annually,[citation needed] with some 400.000 visitors.[citation needed] Of these, 70% are concerts by major national and international artists, 10% are other types of entertainment shows, 13% are fairs, conferences and corporate events, and only 3% are sporting events.[citation needed]

Highlights of its history include the fact that Oslo Spektrum was the venue for the first concert the Spice Girls performed as a quartet, on the 29th of May 1998,[citation needed] following the departure of Geri Halliwell. It also hosted the four final shows of A-ha's farewell tour—on the 30th of November, 2nd, 3rd and 4th of December 2010, making it the venue for their final concert.[citation needed]