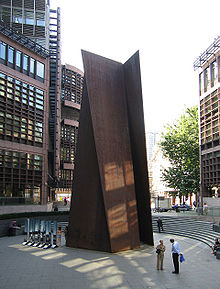 Hebrew version of the Love sculpture made of Cor-Ten steel.

Weathering steel, best-known under the trademark COR-TEN steel and sometimes written without the hyphen as "Corten steel", is a group of steel alloys which were developed to eliminate the need for painting, and form a stable rust-like appearance if exposed to the weather for several years.

The original COR-TEN received the standard designation A 242 ("COR-TEN A") from the ASTM International standards group. Newer ASTM grades are A 588 ("COR-TEN B") and A 606 for thin sheet. All alloys are in common production and use.

"Weathering" means that due to their chemical compositions, these steels exhibit increased resistance to atmospheric corrosion compared to other steels. This is because the steel forms a protective layer on its surface under the influence of the weather.

The corrosion-retarding effect of the protective layer is produced by the particular distribution and concentration of alloying elements in it. The layer protecting the surface develops and regenerates continuously when subjected to the influence of the weather. In other words, the steel is allowed to rust in order to form the 'protective' coating.

The mechanical properties of weathering steels depend on which alloy and how thick the material is.[4][5] 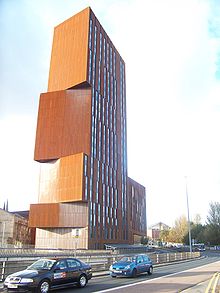 Broadcasting Tower, Leeds, United Kingdom, was voted the Best Tall Building in the World in 2010

Weathering steel is popularly used in outdoor sculptures, such as in the large Chicago Picasso sculpture, and as exterior facades, for its rustic antique appearance. Examples include The Angel of the North, Gateshead, UK and the Humanities and Arts complex at Leeds Metropolitan University - Broadcasting Place - Leeds, UK [6]

It has also been used in bridge and other large structural applications such as the New River Gorge Bridge, the newer span of the Newburgh–Beacon Bridge, and the creation of the Australian Centre for Contemporary Art (ACCA).

It is very widely used in marine transportation, in the construction of Intermodal containers.[7]

The first use of COR-TEN for architectural applications was the John Deere World Headquarters in Moline, Illinois. The building was designed by architect Eero Saarinen, and completed in 1964. In 1977, Robert Indiana created a Hebrew version of the Love sculpture using the four-letter word ahava (אהבה "love" in Hebrew) made from COR-TEN, for the Israel Museum Art Garden in Jerusalem, Israel.

COR-TEN was used in 1971 for an order of electric railcars built by the St. Louis Car Company for Illinois Central Railroad. The use of COR-TEN was seen as a cost-cutting move in comparison with the contemporary railcar standard of stainless steel. A subsequent order in 1979 was built to similar specs, including COR-TEN bodies, by Bombardier. The cars were painted, a standard practice for COR-TEN railcars. However, the durability of COR-TEN did not live up to expectations, with rust holes appearing in the railcars. Ironically, painting may have contributed to the problem, as painted weathering steel is no more corrosion-resistant than conventional steel, because the protective patina will not form in time to prevent corrosion over a localized area of attack such as a small paint failure. Most of these railcars still operate out of Chicago.[8]

Using weathering steel in construction presents several challenges. Ensuring that weld-points weather at the same rate as the other materials may require special welding techniques or material. Weathering steel is not rustproof in itself. If water is allowed to accumulate in pockets, those areas will experience higher corrosion rates, so provision for drainage must be made. Weathering steel is sensitive to salt-laden air environments. In such environments, it is possible that the protective patina may not stabilize but instead continue to corrode. Hawaii's Aloha Stadium, built in 1975, is one example of this. The former Omni Coliseum, built in 1972 in Atlanta, Georgia, never stopped rusting, and eventually large holes appeared in the structure. This was a major factor in the decision to demolish it just 25 years after construction. Weathering steel's normal surface weathering can also lead to rust stains on nearby surfaces.

The U.S. Steel Tower in Pittsburgh, Pennsylvania was constructed by U.S. Steel in part to showcase COR-TEN steel. The initial weathering of the material resulted in a discoloration of the surrounding city sidewalks, as well as other nearby buildings. A cleanup effort was orchestrated by the corporation once weathering was complete to clean the markings. A few of the nearby sidewalks were left uncleaned, and remain a rust color. This problem has been reduced in newer formulations of weathering steel. Staining can be prevented if the structure can be designed so that water does not drain from the steel onto concrete where stains would be visible.