WWTV is the CBS-affiliated television station for the northern Lower and eastern Upper Peninsulas of Michigan. Licensed to Cadillac, it broadcasts a high definition digital signal on VHF channel 9 from a transmitter at its studios on 130th Avenue, northeast of Tustin, in Osceola County. At 1,631 feet (497 m) high, the station's transmitter tower is the tallest in the state. When atmospheric conditions are right, WWTV's signal can be picked up as far south as Lansing and the northern suburbs of Detroit (when CBET in Windsor, Ontario is off the air), and as far southwest as the communities on Wisconsin's eastern shore of Lake Michigan.

Like other network affiliates serving this vast and rural area, the station operates a full-time repeater station, WWUP-TV channel 10. Licensed to Sault Ste. Marie, this station's transmitter is approximately 30 miles SSE of Sault Ste. Marie near Goetzville in Chippewa County.

Together the two stations, which are known on-air as 9&10 News, serve 23 counties in the northern Lower and three counties in the eastern Upper Peninsula. In addition, WWUP's signal can be received by viewers in Northern Ontario including Sault Ste. Marie's Canadian sister city. The stations are owned by Heritage Broadcasting Group, which operates FOX affiliate WFQX-TV and its full-time satellite, WFUP, through a shared services agreement (SSA). That station is owned by Cadillac Telecasting. WWTV airs syndicated programming such as Live with Regis and Kelly and Ellen. The stations broadcast 24 hours a day, seven days a week.

At one point, WWTV (not WWUP) was seen on cable in the Canadian Sault. However, local cable provider Shaw Communications switched its CBS feed to WWJ-TV from Detroit. For many years, WWTV was the only in-market station on cable from the American side of the locks as other American stations were fed from Flint and Detroit. WWTV is also available on cable television in much of Michigan north of Lansing as well as Charter cable systems in Midland. Persona systems (now EastLink) in Sudbury, Ontario carried the station until around 2009 when it was replaced by Buffalo's WIVB-TV. WWTV was also originally seen on the Cablevision systems in Rouyn-Noranda and Val-d'Or, Quebec until the early-2000s when it was replaced with WBZ-TV from Boston, Massachusetts.

The digital signals of WWTV and WWUP are multiplexed.

WWTV began broadcasting on New Year's Day in 1954. The station was on channel 13 and was owned by Jackson radio manufacturer Sparton Corporation. It was Michigan's first television station north of Lansing, predating Traverse City's WPBN-TV by several months. WWTV has been a CBS affiliate from its first day, but initially carried secondary affiliations with ABC and DuMont (the latter shut down in 1956). When WPBN signed on, WWTV shared ABC programming with that station until 1971, when WGTU signed on and became the area's ABC affiliate. WWTV aired some of ABC's soap operas and game shows while WPBN aired ABC's sports programming on the weekends.

In 1958, broadcast pioneer John Fetzer purchased WWTV. Fetzer also owned the Detroit Tigers and the purchase brought Tigers games to Northern Michigan for the first time. In 1961, a fire at the station's transmitter spread to the studio and destroyed the building. The building was quickly rebuilt, complete with new equipment. In 1962, WWTV swapped channel locations with WZZM in Grand Rapids and moved to its current location on channel 9. The move to channel 9 allowed WWTV to boost its broadcasting power to cover the entire northern half of the Lower Peninsula. On June 15 of that year, Fetzer signed on WWUP in Sault Ste. Marie as a full-time satellite of WWTV. The stations were known collectively as "TV 9&10" from 1962 to the late-1990s when the stations dropped "TV" from their name and began referring to themselves as "9&10 News". Many viewers, however, continue to refer to the station as "TV 9&10".

In 1967, TV 9&10 broadcast in color for the first time (as CBS was the last network to convert to color broadcasting). In 1978, Fetzer sold TV 9&10 to Buffalo Bills owner Ralph Wilson. In 1988, the stations were sold to Heritage Broadcast Group, headed by Detroiter Mario Iacobelli. 9&10 News has long been one of the most technologically advanced small-market television stations in the country. Legend has it that when the station broadcasted in color for the first time, CBS was jealous because 9&10's color picture was of higher quality than the rest of the network. Under Iacobelli's ownership, the station has frequently made commercials that many claim to have the look and feel of Detroit-based stations.

On May 10, 2007, it was announced that the area's Fox Network affiliate, WFQX-TV, was being sold by current owner Rockfleet Broadcasting to Cadillac Telecasting. The Federal Communications Commission (FCC) gave regulatory approval in late-October. After the closing of the sale, Cadillac Telecasting entered into a shared services agreement (SSA) with 9&10 News.

On June 12, 2009, WWTV and WWUP closed down their analog signals and moved their digital signals to the previous analog channels.

On September 29, 2010, the FCC granted WWTV a construction permit for a digital fill-in translator on their pre-transition channel 40.[1] This translator will primarily serve the Traverse City area. 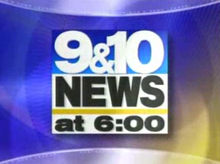 9&10 News has long been the highest-rated television station in the market, especially in news. However, longtime runner-up NBC affiliate WPBN-TV (TV 7&4) has closed the gap in recent years. 9&10 News has always made a large investment into its news department resulting in a higher-quality product than conventional wisdom would suggest for a station based in the 116th market. All told, 9&10 News airs 30 hours of news every week, a very large amount for a small-market station.

9&10 News courted controversy when it polled viewers asking if they wanted the station to air a CBS special about the career of CBS Evening News anchor Dan Rather, who was stepping down from his broadcast. After much attention from both local and national press, the poll was dropped and the special was aired.

On October 31, 2007, 9&10 News began producing a weeknight 10 o'clock newscast on new sister station WFQX. On January 7, 2008, CBS began requiring affiliates to carry The Early Show in its entirety. The third hour of Michigan This Morning, which had been running from 7 to 8 in the morning, was moved to WFQX and expanded to two hours. That evening on WFQX, 9&10 News launched the market's first 7 o'clock newscast.

In addition to its main studios, 9&10 News operates two news bureaus in Traverse City (located on Aero Park Drive, near Cherry Capital Airport) and Petoskey. During its weather forecasts, 9&10 News uses live, NOAA National Weather Service radar data from several regional sites. This data is presented on-screen as the "Doppler 9&10 Radar Network". The main signal comes from the radar located at the NWS Local Forecast Office in Gaylord. Mondays through Thursdays after the 11 o'clock news, the station airs Sports Extra, an extended sportscast. During high school sports season, Friday night 11 o'clock newscasts devote over 20 minutes to Sports Overtime. Known as "the original big show", it regularly features highlights from more than a dozen area high school sporting events and has won numerous awards for the station. 9&10's website features video content from news and sports. It also offers the first and only wireless news website of the Northern Michigan television market.

This film, television or video-related list is incomplete; you can help by expanding it with reliably sourced additions.