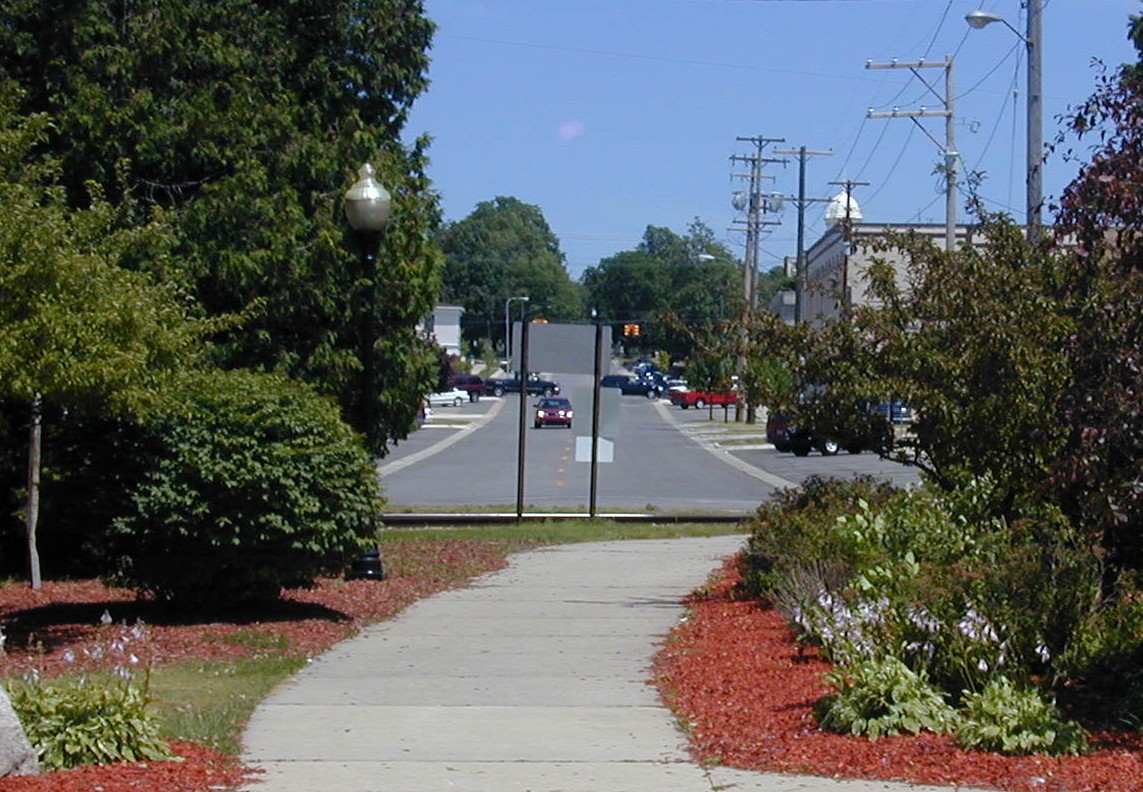 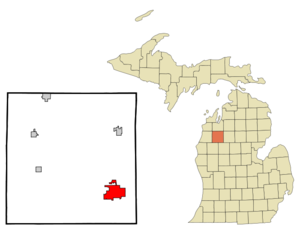 Cadillac is a city in the of and is the of Wexford County.GR|6 As of the 2000 census, the city population was 10,000. The city is situated at the junction of US 131, M-55 and M-115. Approximately five miles north-northwest of Cadillac lies the geographic center of Michigan. [ [http://www.netstate.com/states/geography/mi_geography.htm Michigan Geography from NETSTATE] . " [http://www.netstate.com/ NETSTATE] ." Retrieved on .]

Although European explorers and traders visited the area since the 1700s, permanent white communities were not established until some time later.when Initial settlements were connected with the logging industry.Fact|date=July 2008

In 1871, Cadillac's first began operations. Originally called the Pioneer Mill, it was built by John R. Yale.Failed verification|date=July 2008 That same year, George A. Mitchell, a prominent Cadillac banker and railroad entrepreneur, and Adam Gallinger, a local carpenter, formed the Clam Lake Canal Improvement and Construction Company. Two years later, the Clam Lake Canal was constructed between Big and Little Clam lakes, present-day Lakes Mitchell and Cadillac. Sawmill owners used the canal to transport timber from Big Clam Lake to the mills and railroad sites—Failed verification|date=July 2008the G.R. & I. Railroad had reached the area in 1872—on Little Clam Lake, in Cadillac.

Cadillac was originally named Clam Lake and was incorporated as a village in 1874. George Mitchell was elected the first mayor. The village was incorporated as a city in 1877 and renamed Cadillac, after , a Frenchman who made the first permanent settlement at Detroit in 1701. [ [http://www.cadillac-mi.net/profile_history.php City of Cadillac, History] . [http://www.cadillac-mi.net/ City of Cadillac] Retrieved on ]

The Wexford County seat of government, originally located in Sherman, was moved to Manton in 1881, as the result of a compromise between the feuding residents of Cadillac and Sherman. Cadillac partisans, however, won the county seat by county-wide vote in April 1882. The day following the election a sheriff's posse left the city for Manton by special train to seize the county records. After arriving and collecting a portion of the materials, however, an angry crowd confronted the Cadillac men and drove them from the town.

When the sheriff returned to Cadillac, a force consisting of several hundred armed men was assembled; this group reportedly included a brass band. The Sheriff's force, some of whom may have been intoxicated, traveled back to Manton to seize the remaining records. Although Manton residents confronted the Cadillac men and barricaded the courthouse, the posse successfully seized the documents and returned to Cadillac.

In 1878, Ephraim Shay perfected his , which was particularly effective in its ability to climb steep grades, maneuver sharp turns and manage imperfections in railroad tracks. Cadillac was home to the Company, which manufactured the Shay locomotive for a short time in the early 1880s. [Henderson, Rick (2001). [http://www.shaylocomotives.com/shaypages/EphraimShay.htm Ephraim Shay, the Man] . " [http://www.shaylocomotives.com Shaylocomotives.com] " Retrieved .] The lumber industry continued to dominate the city, drawing in a large immigrant labor force, most of whom were Swedish;Fact|date=July 2008 two of Cadillac's sister cities are , , and , .Fact|date=July 2008

In 1899, the Cadillac Club formed, the forerunner of the Cadillac Area Chamber of Commerce. [ [http://www.cadillac.org/discover/history.htm Cadillac: Where We Came From] Cadillac Area Chamber of Commerce. Retrieved on ] Gradually, various manufacturing firms found success in Cadillac.Fact|date=July 2008 By the early 1900’s, lumber was depleted and the timber industry was in decline.Fact|date=July 2008 Industrial development soon dominated the local economy, and it continues to do so today.Fact|date=July 2008 Cadillac's range of industries include the manufacture of pleasure boats, automotive parts, water well components, vacuum cleaners and rubber products. [ [http://www.cadillac.org/CIF/community.php Cadillac Industrial Fund] Cadillac Area Chamber of Commerce. Retrieved on ]

In 1936, the and the created the Caberfae Ski Area, which led to promotion of the area as a tourist center. [ [http://www.michiganskier.com/cabclub/history.htm Caberfae Ski Club History] Caberfae Ski Club Retrieved ] Caberfae remains in operation today, as the oldest ski resort in the midwest.

In October 1975 the rock group Kiss visited Cadillac and performed at the Cadillac High School gymnasium. They played the concert to honor the football team. In previous years, the team had compiled a record of sixteen consecutive victories, but the 1974 squad opened the season with two losses. The assistant coach, Jim Neff, an English teacher and fan, thought to inspire the team by playing Kiss music in the locker room. He also connected the team's game plan, K-I-S-S or "Keep It Simple Stupid", with the band. The team went on to win seven straight games and their conference co-championship. After learning of their association with the team's success, the band decided to visit the school and play for the homecoming game. [Weinstein, Fannie (1996). [http://www.neffzone.com/kiss/detroit_news_article_about_kiss_.htm The Kiss that Inspired a Small Town Team] . " [http://www.neffzone.com/ Neffzone.com] ." Retrieved on .]

Cadillac maintains a number of state historic landmarks. Most are marked with a green "Michigan Historical Marker" sign that includes a description of the landmark. There are six markers within the city limits: 'Cadillac ,' 'Charles T. Mitchell House,' 'Clam Lake Canal,' 'Cobbs & Mitchell Building,' 'Cobbs & Mitchell No. 1' and the 'Shay Locomotive,' which is pictured at the right. Two more are in the near Cadillac area ('Caberfae Ski Resort' and 'Greenwood Disciples of Christ Church') and another two are dispersed in surrounding Wexford County ('Battle of Manton' and '1st Wexford County Court House'). [ [http://www.michmarkers.com/Frameset.htm Michigan Historical Markers] See "Wexford County." Retrieved on ]

The convert|1150|acre|km2|0|sing=on is entirely within the city limits, and some claimwho? it is the largest lake entirely in any city in the .Fact|date=July 2008 The larger, convert|2580|acre|km2|0|sing=on Lake Mitchell is nearby on the west side of the city, with 1,760 feet of shoreline within the city's municipal boundary. The lakes were connected by a stream which was replaced in 1873 by the . The canal was featured on in the 1970s due to the phenomenon that in winter the canal freezes before the lakes and then after the lakes freeze, the canal thaws and remains unfrozen for the rest of the winter. [ [http://www.cadillacmichigan.com/pages.php?tabid=9&pageid=37&title=Frequently+Asked+Questions#4 Cadillac Area Visitors Bureau, FAQ] . " [http://www.cadillacmichigan.com/ Cadillac Area Visitors Bureau] ." Retrieved on .]

Cadillac sits on the eastern edge of the and the surrounding area is heavily wooded with mixed hardwood and conifer forests. A main agricultural industry in the area is farming. In fact, Cadillac was chosen in 1988 to donate the Christmas tree to sit on the lawn of the in

The area surrounding Cadillac is primarily , and is considered to be part of . The small size of nearby communities make the city a major commercial and industrial hub of the region. [Schindler, Kurt H. (2002). [http://35.8.121.133/wexford_county/factbook/pdfs/Chapter%20B8%20Population.pdf Wexford County Factbook, "Population,"] Chapter B8. [http://www.msue.msu.edu MSU Extension] . Retrieved on ]

On the western portion of Lake Cadillac, where M-55 intersects M-115, is what is locally referred to as Cadillac West. This is a small commercial district, bordering and the two lakes, which caters mostly to tourists. It contains a number of motels and restaurants. [For evidence on the usage of the name Cadillac West and the commercial features of the district, look for descriptions in local websites such as [http://www.northguide.com/cgi-bin/snowmobile/cadillac.pl Cadillac Area Snowmobile Lodging Guide] and [http://www.visitcadillac.com/lodging/ Cadillac Area Lodging.] Retrieved on ]

Along the northern and southern stretches of the lake are the residential areas of the city. They are generally of low to moderate density, characterized primarily by single family structures. [ [http://www.liaa.info/wexford/standard_maps.asp City of Cadillac Zoning] [http://www.freewebs.com/wexfordgis/ Wexford County GIS] Retrieved on ]

There were 4,118 households out of which 32.2% had children under the age of 18 living with them, 43.9% were married couples living together, 14.2% had a female householder with no husband present, and 37.4% were non-families. 31.8% of all households were made up of individuals and 14.4% had someone living alone who was 65 years of age or older. The average household size was 2.37 and the average family size was 2.96.

By Michigan law, Cadillac is a home rule city.Confusing|date=July 2008 The city was incorporated in 1877, with a form of government-one of the first in Michigan. Under this system, the responsibilities of government are shared between an elected City Council and a hired full-time City Manager.

The elected is the legislative authority of the City, composed of five members, one of whom is . All members have equal authority. The Council is responsible for making policy, passing ordinances, voting appropriations, and having overall supervisory authority in the city government. The terms of office are four years for Council Members and two years for the Mayor. The salaries of each council member are set by an independent advisory committee, which meets every two years. [ [http://www.cadillac-mi.net/council_main.php City Council General Information] [http://www.cadillac-mi.net City of Cadillac] Retrieved on ]

The chief administrative officer of the City of Cadillac is the . The City Manager is responsible for the administration of all City departments, as well as the enforcement of all laws, provisions of the City charter and acts adopted by City Council.Fact|date=July 2008

has been the greatest employer in Cadillac since the logging industry.Fact|date=July 2008 Presently, over 26% of the city’s labor force is employed in manufacturing. [ [http://factfinder.census.gov/servlet/QTTable?_bm=y&-geo_id=16000US2612320&-qr_name=DEC_2000_SF3_U_DP3&-ds_name=DEC_2000_SF3_U&-_lang=en&-_sse=on 2000 U.S. Census Data] [http://www.census.gov U.S. Census] Retrieved on ] There are three s within the city limits, comprising 7% of the total land use in Cadillac and 47% of the city’s tax base. [ [http://www.cadillac-mi.net/economic_development/industrial_parks/BusinessClimateTestimonials.htm City of Cadillac Industrial Parks] [http://www.cadillac-mi.net City of Cadillac] Retrieved on ] Much of the city’s economic performance is determined by the fortunes of local industry.

Apart from its manufacturing base, Cadillac is frequently considered by those who know it to be a town.who? The center of the city is generally perceived to have a "small-town-feel." [Whetstone, Matt (December 7, 2007). [http://www.cadillacnews.com/articles/2007/12/07/news/107766.txt Survey says: Cadillac good, improvement needed] " [http://www.cadillacnews.com Cadillac News] " Retrieved on ] In the summer, the downtown fills with tourists, many of whom are from southern Michigan. The city center is in fact only one block from Lake Cadillac and, by docking at the public docks, is as nearly accessible by boat as it is by car. The city’s immediate proximity to two lakes, as well as , , and a number of major highways ensures that tourism occupies a significant sector of the local economy.

During the winter months Lake Cadillac and Lake Mitchell freeze over and the city becomes covered with . Cadillac is connected to a number of trail systems heavily used by winter recreation enthusiasts, and the city itself integrates unusually well into the corridors of travel created by rs. [For details on popular trails, see [http://www.visitcadillac.com/snowmobile Cadillac Snowmobiling] Retrieved on ]

Cadillac is also known as Chestnut Town, USA. The local area is home to a relatively large number of trees, planted by pioneers from New York and Pennsylvania who settled in western Michigan. A blight in the early twentieth century wiped out nearly every American Chestnut tree, but those in western Michigan developed a mysterious resistance and survived. The Cadillac Chestnut Harvest Festival is held every year, on the second Saturday of October. [Fulbright, Dennis (2003) [http://www.icserv.com/nnga/chstfest.htm Cadillac Chestnut Harvest Festival.] [http://www.icserv.com/nnga/ Northern Nut Growers Association, Inc.] Retrieved on ]

The Baker College-Cadillac campus occupies 66 acres just outside of the City of Cadillac. The school enrolls more than 1,300 students and offers associate's and bachelor's degrees, apart from professional certifications. [ [http://www.baker.edu/campusresources/Cadillac/cacinfo.cfm Baker College-Cadillac] . Online profile. Retrieved on ]

Cadillac is situated as the confluence of three highways: US-131, M-55 and M-115. Prior to 2001, the northern terminus of the freeway portion of US-131 was located at the southern entrance to Cadillac. With the construction of a , the US-131 freeway was extended around the east side of the city. The former route of the highway through downtown Cadillac was redesignated as Business US-131. In the city, BUS US-131 is named named Mitchell Street, after George Mitchell, but may be referred to as .

Cadillac and Wexford County jointly operate a local public bus service. The Cadillac/Wexford Transit Authority is a demand-response system, and has been in operation since 1974. [ [http://www.michigan.gov/mdot/0,1607,7-151-9625_21607-162305--,00.html Cadillac/Wexford Transportation Authority] [http://www.michigan.gov/mdot/ Michigan Department of Transportation] Retrieved on ] In recent years the Authority has been experimenting with a fixed-route service, operating a mid-day service in the summer. This proto-bus line runs between Cadillac West and the downtown. [Suhs, Mardhi (August 14, 2006). [http://www.cadillacnews.com/articles/2006/08/14/news/news04.txt Trolley has stops in Cadillac West, downtown district during summer.] " [http://www.cadillacnews.com Cadillac News.] " Retrieved on ]

The White Pine Trail's northern terminus is in Cadillac. The trail, which stretches 92 miles and originates from , follows an abandoned railroad bed into the center of the city. The last mile of the trail is paved.Fact|date=July 2008