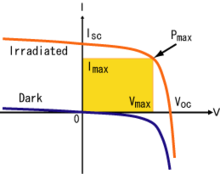 Current-voltage characteristics of a solar cell at a particular light level, and in darkness. The area of the yellow rectangle gives the output power. Pmax denotes the maximum power point

Maximum power point tracking (MPPT) is a technique that grid tie inverters, solar battery chargers and similar devices use to get the maximum possible power from the PV array.[1] Solar cells have a complex relationship between solar irradiation, temperature and total resistance that produces a non-linear output efficiency known as the I-V curve. It is the purpose of the MPPT system to sample the output of the cells and apply a resistance (load) to obtain maximum power for any given environmental conditions.[2] Essentially, this defines the current that the inverter should draw from the PV in order to get the maximum possible power (since power equals voltage times current). 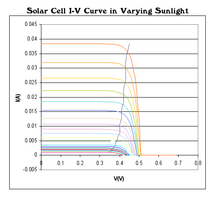 Solar cell I-V curves where a line intersects the knee of the curves where the maximum power point is located.

Photovoltaic cells have a complex relationship between their operating environment and the maximum power they can produce. The fill factor, more commonly known by its abbreviation FF, is a parameter which characterizes the non-linear electrical behavior of the solar cell. Fill factor is defined as the ratio of the maximum power from the solar cell to the product of Voc and Isc, and in tabulated data it is often used to estimate the power that a cell can provide with an optimal load under given conditions, P=FF*Voc*Isc. For most purposes, FF, Voc, and Isc are enough information to give a useful approximate model of the electrical behavior of a photovoltaic cell under typical conditions.

For any given set of operational conditions, cells usually have a single operating point where the values of the current (I) and Voltage (V) of the cell result in a maximum power output. These values correspond to a particular load resistance, which is equal to V/I as specified by Ohm's Law. The power P is given by P=V*I. A photovoltaic cell has an approximately exponential relationship between current and voltage (taking all the device physics into account, the model can become substantially more complicated though). As is well known from basic circuit theory, the power delivered from or to a device is optimized where the derivative (graphically, the slope) dI/dV of the I-V curve is equal and opposite the I/V ratio (where dP/dV=0). This is known as the maximum power point (MPP) and corresponds to the "knee" of the curve.

A load with resistance R=V/I equal to the reciprocal of this value is the load which draws maximum power from the device, and this is sometimes called the characteristic resistance of the cell. Note however that this is a dynamic quantity which changes depending on the level of illumination, as well as other factors such as temperature and the age of the cell. If the resistance is lower or higher than this value, the power drawn will be less than the maximum available, and thus the cell will not be used as efficiently as it could be. Maximum power point trackers utilize different types of control circuit or logic to search for this point and thus to allow the converter circuit to extract the maximum power available from a cell.

P&O algorithms are easy to implement, but they sometimes result in oscillations around the MPP in steady-state operation. They also have slow response times and can even track in the wrong direction under rapidly changing atmospheric conditions.

This method uses the PV array's incremental conductance dI/dV to compute the sign of dP/dV. INC tracks rapidly changing irradiance conditions more accurately than the P&O method. However, like the P&O method, it can produce oscillations and be confused by rapidly changing atmospheric conditions. Another disadvantage is that its increased complexity increases computational time and slows down the sampling frequency.

This method makes use of the fact that the ratio of maximum power point voltage to the open circuit voltage is often close to a constant value, with 0.76 being a common estimate. One problem with this method arises from the fact that it requires momentarily setting the PV array current to 0 to measure the array's open circuit voltage. The array's operating voltage is then set to (for example) 76% of this measured value. But during the time the array is disconnected, the available energy is wasted. It has also been found that while 76% of the open circuit voltage is often a very good approximation, it does not always coincide with the maximum power point.[5] Thus this method may not give as much efficiency as others, especially if conditions are highly variable or the physical behavior of the cell deviates from expectations. Its main advantage is that it is relatively simple to implement and thus usually less expensive.

Traditional solar inverters perform MPPT for an entire array as a whole. In such systems the same current, dictated by the inverter, flows through all panels in the string. But because different panels have different IV curves, i.e. different MPPs (due to manufacturing tolerance, partial shading, etc.) this architecture means some panels will be performing below their MPP, resulting in the loss of energy.[6]

At night, an off-grid PV power system uses batteries to supply its loads. Although the battery pack voltage when fully charged may be close to the PV array's peak power point, this is unlikely to be true at sunrise when the battery is partially discharged. Charging may begin at a voltage considerably below the array peak power point, and a MPPT can resolve this mismatch.

In a grid-tied photovoltaic system, the grid is essentially a battery with near infinite capacity. The grid can always absorb surplus PV power, and it can cover shortfalls in PV production (e.g., at night). Batteries are thus needed only for protection from grid outages. The MPPT in a grid tied PV system will always operate the array at its peak power point unless the grid fails when the batteries are full and there are insufficient local loads. It would then have to back the array away from its peak power point as in the off-grid case (which it has temporarily become).

MPPT as a motor drive

MPPTs can be designed to drive an electric motor without a storage battery. They provide significant advantages, especially when starting a motor under load. This can require a starting current that is well above the short-circuit rating of the PV panel. A MPPT can step the panel's relatively high voltage and low current down to the low voltage and high current needed to start the motor. Once the motor is running and its current requirements have dropped, the MPPT will automatically increase the voltage to normal. In this application, the MPPT can be seen as an electrical analogue to the transmission in a car; the low gears provide extra torque to the wheels until the car is up to speed.