In Shia and Sunni eschatology, the Mahdi is a Messianic figure who, it is believed, will appear on Earth before the Day of Judgment and, alongside Jesus, will rid the world of wrongdoing, injustice and tyranny. People claiming to be the Mahdi have appeared across the Muslim world - in South Asia, Africa and the Middle East - and throughout history since the birth of Islam (610 CE).

A claimant Mahdi can wield great temporal, as well as spiritual, power: claimant Mahdis have founded states (e.g. the late 19th-century Mahdiyah in Sudan), as well as religions and sects (e.g. Bábism, or the Ahmadiyya movement). The continued relevance of the Mahdi doctrine in the Muslim world was most recently emphasised during the 1979 seizing of the Grand Mosque in Mecca, Saudi Arabia, by at least 200 militants led by Juhayman al-Otaibi, who had declared his brother-in-law, Muhammad bin abd Allah al-Qahtani, the Mahdi.

Ṣāliḥ ibn Tarīf, the second king of the Berghouata, proclaimed himself prophet of a new religion in the 8th century. He appeared during the caliphate of the Ummayad Hisham ibn Abd al-Malik. According to Ibn Khaldun's sources, he claimed receiving a new revelation from God called a Qur'an, written in the Berber language with 80 chapters. He established laws for his people, which called him Salih al-Mu'minin ('Restorer of the Believers'), and the final Mahdi.

Islamic literature considers his belief heretical, as several tenets of his teaching contrast with orthodox Islam, such as capital punishment for theft, unlimited wives, unlimited divorces, fasting of the month of Rajab instead of Ramadan, and ten obligatory daily prayers instead of five. Politically, its motivation was presumably to establish their independence from the Umayyads, establishing an independent ideology lending legitimacy to the state. Some modern Berber activists regard him as a hero for his resistance to Arab conquest and his foundation of the Berghouata state.

Abdallah ibn Muawiya was descendant of Jafar ibn Abi Talib. At the end of 127 AH/ 744 CE Shia's of Kufa set up him as Imam. he revolted against Yazid III, the Umayyad Caliph, with the support of Shia's of Kufa and Ctesiphon. He moved to west of Iran and Isfahan and Istakhr. He managed to control the west of Iran for two years. Finally, he defeated by the caliph armies in 746-7 CE and fled to Harat in Khorasan. He died in Abumuslim prison, his rival. His followers did not believe his death and said that he went to occultation and he would return as Mahdi.[1]

Muhammad ibn Ja'far al-Sadiq the younger full brother of Musa al-Kadhim, appeared in Mecca in the year 200 A.H. / 815 C.E. claiming that he was the Awaited Mahdi. He believed in a Zaydi Shia type of Imamate and declared himself as the Caliph of the Muslims and took the oath of allegiance from them and was called the Leader of the faithful. He was recognized as the Imam by a small group of followers. His followers became denominated as the Shumaytiyya (Sumaytiyya) after their leader Yahya ibn Abi’l-Shumayt (al-Sumayt). However, his revolt against the Caliph Al-Ma'mun proved unsuccessful in the very same year it started (i.e. 815 C.E.). He ended his revolt by abdicating and publicly confessing his error and was then banished from the Hejaz.

Muhammad ibn Hasan ibn Ali (29 July CE 869/15 Sha‘bān 255 AH - ?), more commonly called Muhammad al-Mahdi, is the twelfth imam of Twelver Shia Islam. He is believed by Twelver Shī‘a Muslims to be the Mahdī, an ultimate savior of humankind and the final Imām of the Twelve Imams. Twelver Shī‘a believe that al-Mahdī was born in 869 and did not die but rather was hidden by God (this is referred to as the Occultation) and will later emerge with Isa (Jesus) in order to fulfill their mission of bringing peace and justice to the world. He assumed the Imamate at 5 years of age. Some Shi‘īte schools do not consider ibn-al-Hasan to be the Mahdī, although the mainstream sect Twelvers do.

Ubayd Allah al-Mahdi Billah (r. 909-934), the first caliph of the Fatimid state, established in 909, was one of only two claimants who succeeded in establishing a state. (See Muhammad Ahmad below).

His preacher/Da'i Abu 'Abdullah Al-Husayn Al-Shi'i helped secure for him parts of north Africa using the support of the Berber locals. The Fatimids later built Cairo as capital in Egypt and their descendants continued to rule as Caliphs (the sixth, Al-Hakim bi-Amr Allah, is believed by the Druze to be in occultation and due to return as Mahdi on Judgment Day) until Salah-ud-Din Ayubi (also called Saladin) took over Egypt and ended the Fatimid state. He imprisoned the last Fatimid Caliph and his family in the Fatimid Palace until death.

The Moroccan Ibn Tumart (c. 1080 - c. 1130), sought to reform Almoravid decadence in the early 12th century. Rejected in Marrakech and other cities, he turned to his Masmuda tribe in the Atlas Mountains for support. Because of their emphasis on the unity of God, his followers were known as Al Muwahhidun ('unitarians', in western language: Almohads).

Although declaring himself mahdi, imam and masum (literally in Arabic: innocent or free of sin), Muhammad ibn Abdallah ibn Tumart consulted with a council of ten of his oldest disciples, and conform traditional Berber representative government, later added an assembly of fifty tribal leaders. The Almohad rebellion began in 1125 with attacks on Moroccan cities, including Sus and Marrakech. But as Muhammad ibn Abdallah ibn Tumart died in 1130, his successor Abd al Mumin took the title of Caliph - claiming universal leadership in Islam - and placed members of his own family in power, converting the system into a traditional sultanate.

He claimed to be the Mahdi on three occasions, first in Mecca, and later twice in India, attracting a large following, and opposition from the ulema.

Muhammad Jaunpuri died in 1505, aged 63, at Farah, Afghanistan. His followers, known as Mahdavis, continue to exist and are centred around the Indian city of Hyderabad, although there Mahdavi communities in Gujarat, Karnataka, Madhya Pradesh and Maharashtra, as well as in Pakistan and overseas in America and Britain.[2]

Ahmed ibn Abi Mahalli (1559–1613), from the south of Morocco, was a Qadi and religious scholar who proclaimed himself mahdi and lead a revolution (1610–13) against the reigning Saadi dynasty.

The 19th century provided several Mahdi claimants, some of whose followers and teachings survive to the present day. 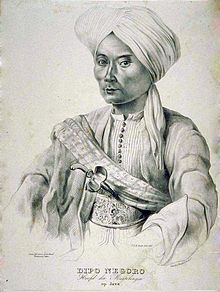 Prince Diponegoro (11 November 1785 – 8 January 1855), prince of Yogyakarta, Java. He saw himself as a Javanese Mahdi, or Ratu Adil (prophesised by King Joyoboyo), against Dutch colonialism. Now a National Hero of Indonesia.[list membership disputed] 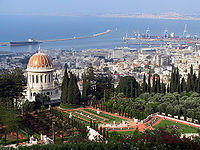 The Shrine of the Báb in Haifa, Israel. The Báb declared himself the Mahdi in 1844, founding the Bábist faith.

Alí Muḥammad Shírází (20 October 1819–9 July 1850), claimed to be the Mahdi on 24 May 1844, taking the name Báb (Arabic: باب‎ / English: Gate) and thereby founding the religion of Bábism. He was later executed by firing squad in the town of Tabriz. His remains are currently kept in a tomb at the Bahá'í World Centre in Haifa, Israel. 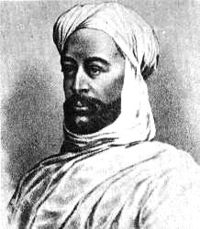 Muhammad Ahmad (12 August 1844-22 June 1885), a Sudanese sufi sheikh of the Samaniyya order, declared himself Mahdi in June 1881 and went on to lead a successful military campaign against the Turko-Egyptian government of Sudan. Although he died shortly after capturing the Sudanese capital, Khartoum (1885), the Mahdist state continued under his successor, Abdallahi ibn Muhammad, until 1898, when it fell to the British army following the Battle of Omdurman. 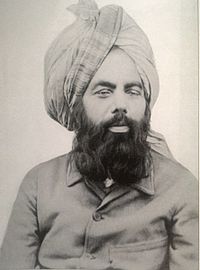 Mirza Ghulam Ahmad (13 February 1835-26 May 1908), claimed to be both the Mahdi and the second coming of Jesus in the late 19th century in British India. He founded the Ahmadiyya religious movement in 1889, which, although considered by its followers to be Islam in its pure form, is not recognized as such by the majority of mainstream Muslims. In 1974, the Pakistani parliament adopted a law declaring the Ahmadis to be non-Muslims. Since Ghulam Ahmad's death, the Ahmadiyya community has been led by his successors and has grown considerably.[4]

Muhammad bin abd Allah al-Qahtani (28 September 1935 - 9 January 1980), was proclaimed Mahdi by his brother-in-law, Juhayman al-Otaibi, who led over 200 militants to seize the Grand Mosque in Mecca on 20 November 1979. The uprising was defeated after a two-week siege in which at least 300 people were killed. 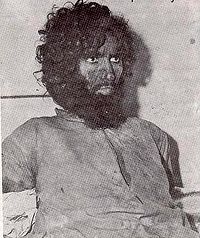 Riaz Ahmed Gohar Shahi (25 November 1941 - ?) is the founder of the spiritual movements Messiah Foundation International (MFI) and Anjuman Serfaroshan-e-Islam.[5][6][7] He is controversial for being declared the Mehdi, Messiah, and Kalki Avatar by the MFI.

Shahi's supporters claim that his face became prominent on the Moon, Sun, nebula star and the Black Stone in Mecca,[8] and that these appearances were signs from God that Gohar Shahi was the awaited Imam Mehdi, Messiah, and Kalki Avatar in 1985. Shahi has also supported this claim, saying that God had revealed the images of Shahi on the Moon and various locations, for which Shahi himself was not responsible, and if questions should be raised, they should be raised with God.

Messiah Foundation International claims the alleged images to be signs from God, pointing to Shahi being the awaited Mehdi, and quote religious texts. His death has not been confirmed but a Pakistani news agency says he died in 2003 and some say he is serving a lifetime prison in Pakistan.

Ariffin Mohammed (1943 - ), also known as "Ayah Pin", the leader and founder of the banned Sky Kingdom, he was born in 1943 in Beris, Kampung Besar Bachok, Kelantan. In 1975 a spiritual group was formed in Bagan Lebai Tahir, Butterworth, Penang. He claimed to be the incarnation of Jesus, as well as Muhammad, Shiva, and Buddha. Devotees of Sky Kingdom believe that one day, Ayah Pin will return as the Mahdi. His followers consider him the king of the sky, and the supreme object of devotion for all religions.[9]

Dia Abdul Zahra Kadim (1970 - January 2007), a Shia Iraqi former leader of Soldiers of Heaven, claimed to be the Mahdi.

People claimed to be the Mahdi by their followers or supporters