The c-Met (mesenchymal-epithelial transition) tyrosine kinase stimulates cell scattering, invasion, protection from apoptosis and angiogenesis.[1] c-Met is a receptor tyrosine kinase,[2] which can cause a wide variety of different cancers, such as renal, gastric and small cell lung carcinomas, central nervous system tumours, as well as several sarcomas [3] when its activity is dysregulated. Targeting the ATP binding site of Met by small molecules inhibitors is one strategy for inhibition of the tyrosine kinase.[4] 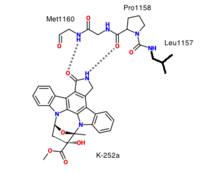 Figure 3. K252a, the first small molecule Met inhibitor to be solved in complex with the unphosphorylated Met kinase domain. Two key hydrogen bonds form between the hinge of Met and the pyrralocarbazole.[5]

Early in the 1980‘s MET was described as the protein product of a transforming oncogene.[6] [7]

Initial attempts to identify ATP-competitive c-Met inhibitors in 2002 led to the discovery of K252a, a staurosporine-like inhibitor which blocks c-Met.[7][8] K252a was the first structure to be solved in complex with the unphosphorylated MET kinase domain. It forms two hydrogen bonds between the hinge and pyrralocarbazole subunit.[5]

Later, series of more selective c-Met inhibitors were designed, where an indolin-2-one core (encircled in figure 1) was present in several kinase inhibitors. SU-11274 was evolved by substitution at the 5-position of the indolinone [6] and by adding a 3,5-dimethyl pyrrole group, PHA-665752 was evolved [8] – a second-generation inhibitor with better potency and activity.[7]

Interest in this field has risen rapidly since 2007 and over 70 patent applications had been published in mid-2009.[7]

Intensive efforts have been exerted in the pharmaceutical industry following the acceptance of c-Met as a suitable target for cancer therapy. 20 crystal structures with and without ligands have been published and in 2010 nearly a dozen small molecule c-Met inhibitors have been tested clinically.[9]

c-Met dysregulation can be due to overexpression, gene amplification, mutation, a ligand-dependent auto- or paracrine loop or an untimely activation of RTK.[7][10] All these factors affect the survival of cells, their proliferation and motility. They also lead to cancers and resistance to therapies which aim to treat them.[10] Patients with aberrant c-Met activity usually have a poor prognosis, aggressive disease, increased metastasis and shortened survival.[7] This is why targeting the HGF/MET signalling pathway has grown in popularity as a treatment for cancer,[7][10] and several different therapeutic approaches are being clinically tested. A variety of approaches have been used to target c-Met, each focusing on one of the serial steps that regulate c-Met activation by antibodies, peptide agonists,[1][7] decoy receptors and other biologic inhibitors[11] or small molecules inhibitors.[7] 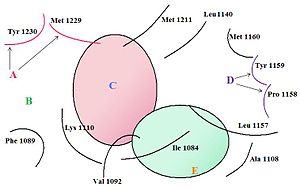 The c-Met RTK subfamily is different in structure to many other RTK families: The mature form has an extracellular α-chain (50kDa) and a transmembrane β-chain (140kDa) that are linked together by a disulphide bond. The beta chain contains the intracellular tyrosine kinase domain and a tail on the C-terminal which is vital for the docking of substrates and downstream signalling.[7] [14]

HGF is the natural high-affinity ligand for Met.[7][8][14] Its N-terminal region binds to Met and receptor dimerization as well as autophosphorylation of two tyrosines occur in the activation loop (A-loop) in the kinase domain of Met.[7]

Phosphorylation occurs in tyrosines close to the C-terminus, creating a multi-functional docking site[7][15] which recruits adaptor proteins and leads to downstream signalling. The signaling is mediated by Ras/Mapk, PI3K/Akt, c-Src and STAT3/5 and include cell proliferation, reduced apoptosis, altered cytoskeletal function and more.

The kinase domain usually consists of a bi-lobed structure, where the lobes are connected with a hinge region, adjacent to the very conserved ATP binding site.[7]

Using information from the co-crystal structure of PHA-66752 and c-Met, the selective inhibitor PF-2341066 was designed. It was undergoing Phase I/II clinical trials in 2010. Changing a series of 4-phenoxyquinoline compounds with an acyl thiourea group led to compounds with c-Met activity, e.g. quinoline.[7] This was a key step in the progress of c-Met inhibitor development in that the acyl binding gives the terminal aryl group the ability to penetrate a deep hydrophobic pocket and so it enhances the potency of the compounds. Alternatives to the acyl thiourea linkage have been found, which have a pyrimidone group, as in AM7.[16]

Due to these two different types of binding, small molecule Met inhibitors have been divided into two classes; class I (SU-11274-like) and class II (AM7-like).[17] There is however another type of small-molecule inhibitors, which does not fit into either of the two classes; a non-competitive ATP inhibitor that binds in a different way to the other two.[18]

Even though the two classes are structurally different, they do share some properties: They both bind at the kinase hinge region (although they occupy different parts of the c-Met active site[17]) and they all aim to mimic the purine of ATP. BMS-777607 and PF-02341066 have a 2-amino-pyridine group, AMG-458 has a quinoline group and MK-2461 has a tricyclic aromatic group.[19]

Class I inhibitors have many different structures,[9] are relatively selective and have a U-shaped conformation[7] and binds to the activation loop of c-Met.[9]

Structure-activity relationship of Class I inhibitors

Figure 6. SAR of class I Met inhibitors with various substitution groups. Ar symbolizes an aromatic group (in this figure, from left to right: quinoline, azaindole, benzothiazide, benzyl groups (with various R groups, such as -OH) and methoxyphenyl)). X symbolizes the linker between the core and the aryl group (from left to right: Methyl, difluoro methyl, methoxy, amino and sulfur groups). R1 symbolizes the various groups which were added onto C-7 (from top to bottom: N-linked chlorophenol, N-hydroxyethyl pyrazole and pyrazole). Atoms in positions 1, 5, 8 and 9 in many of the tested analogs were either C or N atoms.[9]

A series of triazolotriazines was discovered, which showed great promise as a c-MET inhibitors. Structure activity relationship (SAR) implies the necessity of an aryl group linked to the triazine ring and an appropriate hydrogen bond acceptor (e.g. hydroxyl group) attached to the pendant benzyl ring but it seems like the phenol acts as a hinge binder (with Met1160) and the that the triazine interacts with Tyr1230.[9] A number of similar analogues were found and assayed. Structurally similar series of c-Met inhibitors in which a phenolic hinge binding element was linked to an arylamino-triazolopyridazine or aryl-triazolothiapyridazine. One-atom linker was more efficient than a two-atom linker and that substitution at the benzylic position seemed to be tolerated. Compounds with heterocyclic hinge binding elmements (quinoline, pyridine, azaindole) linked to fused, nitrogen-dense heteroaromatics (triazolopyridazines, triazolopyrazines and triazolotriazines) have been described.[9] See figure 4 for details.[9]

Examples of Class I inhibitors

JNJ-38877605, which contains a difluoro methyl linker and a bioavailable quinoline group, was undergoing clinical trials of Phase I for advanced and refractory solid tumours in 2010.[9]

PF-04217903, an ATP-competitive and exceptionally selective compound, has an N-hydroxyethyl pyrazole group tethered to C-7 of the triazolopyrazine. It was undergoing phase I clinical trials in 2010.[9]

The SAR of the unique kinase inhibitor scaffold with powerful c-Met inhibitory activity, MK-2461, has been explored.[20] The pyridine nitrogen is necessary for inhibition activity and central ring saturation reduced potency.[9] Planarity of the molecule has proven to be essential for maximum potency.[20] Cyclic ethers balance acceptable cell-based activities and pharmacokinetic characteristics. The following elements are thought to be key in the optimization process:

1) Aryl groups at the 7-position, as if to maximize hydrophobic packing and planarity,

Often, oncogenic mutations of c-Met cause a resistance to small molecule inhibitors. An MK-2461 analog was therefore tested against a variety of c-Met mutants but proved to be no less potent against them. This gives the molecule a big advantage as a treatment for tumours caused by c-Met dysregulation.[20] MK-2461 was undergoing phase I dose escalation trials in 2010.[9]

Figure 8. A common scaffold for class II Met inhibitors. Atoms in positions F, E, 6 and 3 in many of the tested analogs were either C, C-F or N groups. The O atom of the amide may be substituted for an S atom. The R groups represent some of the groups that were tested against MET with various substitution groups (Left side from top to bottom: Amide, chlorine, aryl oxy qinoline groups, methoxy phenyl and pyrrolotriazines with a terminal amine group. Right side from top to bottom: Fluorophenyl malonamide with a cyclopropyl group, hydroxy methyl phenyl pyrazolone, ethoxy fluorophenyl pyridone and fluorophenyl oxalamide).A: The R3 group lodges into the hydrophobic pocket of c-MET, B: The pyridine group binds to the hinge region and C: The R2 group usually binds to the ribose pocket where the ribose of ATP normally binds.[9]

Series of quinoline c-Met inhibitors with an acylthiourea linkage have been explored. Multiple series of analogs have been found with alternative hinge binding groups (e.g. replacement of the quinoline group), replacement of the thiourea linkage (e.g. malonamide, oxalamide, pyrazolones) and constraining of the acyclic acylthiourea structure fragment with various aromatic heterocycles. Further refinement included the blocking of the p-position of the pendant phenyl ring with a fluorine atom.[9] Example of interactions between c-Met and a small molecules (marked in a red circle) of class II are as follows: The scaffold of c-Met lodges into the ATP pocket by three key hydrogen bonds, the terminal amine interacts with the ribose pocket (of ATP), the terminal 4-fluorophenyl group is oriented in a hydrophobic pocket and pyrrolotriazine plays the role of the hinge-binding group.[9]

AMG 458 is a potent small molecule c-MET inhbitor which proved to have more than a 100-fold selectivity for c-MET across a panel of 55 kinases. Also, AMG 458 was 100% bioavailable across species and the intrinsic half-life increased with higher mammals.[9]

ARQ197 is a selective, orally bioavailable,[14][18] clinically advanced low-molecular weight and well-tolerated c-MET inhibitor, which is currently in Phase 3 clinical trials in non-small cell lung cancer patients.[18] ARQ197 is a non-ATP competitive c-MET autophosphorylation inhibitor with a high selectivity for the unphosphorylated conformation of the kinase.[14][18] ARQ197 cuts off the interactions between the key catalytic residues.[18] The structure of ARQ 197 in complex with the c-Met kinase domain shows that the inhibitor binds a conformation that is distinct from published kinase structures. ARQ 197 strongly inhibits c-Met autoactivation by selectively targeting the inactive form of the kinase between the N- and C- lobes and occupies the ATP binding site.[18]

Since the discovery of Met and HGF, much research interest has focused on their roles in cancer. The Met pathway is one of the most frequently dysregulated pathways in human cancer.[14] Increased understanding of the binding modes and structural design brings us closer to the use of other protein interactions and binding pockets, creating inhibitors with alternative structures and optimized profiles.[7]

Thus far, over a dozen Met pathway inhibitors, with varying kinase selectivty profiles ranging from highly selective to multi-targeted,[9] have been studied in the clinic and good progress has been achieved [14] (See table 1). However, as the trials progress many questions and challenges will also arise and need to be addressed.[14] Also, most approved small molecule agents do not cure patients and most patients who show good response to treatments to begin with tend to develop resistance to them later on. The tumours which then develop are often more aggressive and harder to treat.[14]

The the use of c-Met inhibitors with other therapeutic agents could be crucial for overcoming potential resistance as well as for improving overall clinical benefit. Met pathway inhibitors might be used in combination with other treatments, including chemo-, radio- or immunotherapy as well as different Met pathway inhibitor, f.ex. in with HGF and Met biological antagonists or antibodies against HGF and MET.[14] Still, the risk of accumulated toxicity and interactions with other drugs remains.[7] Ultimately, as a key element in the development of any targeted therapy, the molecular and biochemical determination of the precise functions of the Met pathway in the context of other relevant pro-cancer pathways will undoubtedly play a significant role in this effort.[14]