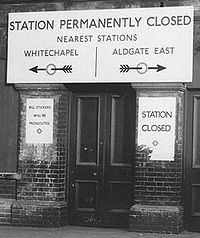 The London Underground is a metro system in the United Kingdom that serves Greater London and adjacent counties of Essex, Hertfordshire and Buckinghamshire. The system has many former stations, while others were planned but not opened. Services to some former stations ended when they were closed because they had too few passengers to make their retention worthwhile; some stations became redundant after lines were rerouted or replacements were constructed; others are no longer served by the Underground, but remain open to National Rail main line services. Many stations were planned as parts of new lines or extensions to existing ones, but were later abandoned without having been opened.

Some closed stations retain their original station building, converted for other uses or abandoned, while others have been demolished and their sites redeveloped. A number of stations, while still open, have closed platforms or sections, such as the Jubilee Line platforms at Charing Cross. The interiors and platforms of closed stations are among parts of the London Underground available for filming purposes.[1]

The following stations were once served by a London Underground line or by one of the organisation's predecessor companies,[2] but are no longer served. Many are permanently closed, but some continue to be served by National Rail operators.

The following stations were once planned by the London Underground or one of the early independent underground railway companies and were granted parliamentary approval. Subsequent changes of plans or shortages of funds led to these stations being cancelled before they opened, and, in most cases, before any construction work was carried out.