There are many tints and shades of the color gray. A selection of these various colors are shown below.

White is a color, the perception of which is evoked by light that stimulates all three types of color sensitive cone cells in the human eye in equal amounts and with high brightness compared to the surroundings. A white visual stimulation will be void of hue and grayness. White is the lightest possible color.

Black is the color of objects that do not emit or reflect light in any part of the visible spectrum; they absorb all such frequencies of light. Black is the darkest possible color.

At right is displayed the web color gainsboro.

Gainsboro is a pale tone of gray.

There is no evidence the name gainsboro was used as a color name before it was included as one of the X11 colors when they were formulated in 1987.

At right is displayed the web color light gray.

At right is displayed the color medium gray, i.e. gray as defined in the X11 color names, which is lighter than the HTML/CSS gray shown below.

See the chart Color names that clash between X11 and HTML/CSS in the X11 color names article to see those colors which are different in HTML/CSS and X11.

At right is displayed the color gray.

The first recorded use of gray as a color name in the English language was in 700.[7]

This tone of "gray" (HTML gray) is universally used as the standard for gray because it is that tone of gray which is halfway between white and black.

At right is displayed the web color dim gray.

This color is a dark tone of gray.

Off-grays are colors that are very close to achromatic grays, but whose red, green, and blue color codes are not exactly equal.

Charcoal is a color that is a representation of the dark gray color of burned wood.

The first recorded use of charcoal as a color name in English was in 1606.[10]

Platinum is a color that is the metallic tint of pale grayish-white resembling the metal platinum.

The first recorded use of platinum as a color name in English was in 1918.[11]

Timberwolf is a light gray color with a hue that is somewhat toward the white. It is a representation of the color of the fur of lower snout and the legs of a gray wolf. It is between gray and white in terms of its value (darkness). Timberwolf was a color that was created by Crayola in 1993. It came from the Big Box of 96. The shade also appears in Crayola's 36 and 50 colored pencil sets as "Cool Gray". 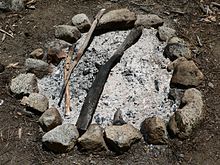 Wood ash from a campfire

Displayed at right is the color ash gray.

The color ash gray is a representation of the average color of ash.

The color battleship gray is displayed at right. It is so called because the color is the drab shade of gray used for battleship camouflage. It is also the color British Railways location cases are painted, after buying the excess paint from the Royal Navy following World War II.

The color lends its name to the song Battleship Grey by Tiësto with Kirsty Hawkshaw providing vocals. It appeared in his first album, In My Memory.

Cool gray is a medium light color gray mixed with the color blue.

This color is a dull shade of blue-gray.

This color is identical with color sample #203 (identified as a tone of "gray blue" or "grayish blue") at the following website: http://tx4.us/nbs/nbs-g.htm—The ISCC-NBS Dictionary of Colo(u)r Names (1955), a website for stamp collectors to evaluate the colors of their stamps.

Poet George Sterling once wrote a poem calling San Francisco the Cool Grey City of Love. [15] The phrase cool grey as applied to San Francisco refers to the frequent fogs from the Pacific Ocean that envelop the city.

Cadet gray is a slightly bluish shade of the color gray. The first recorded use of cadet grey as a color name in English was in 1912.[16]

Glaucous (from the Latin glaucus, meaning "bluish-gray", from the Greek glaukos) is used to describe the pale gray or blue appearance of the surfaces of some plants, as well as in the names of birds, such as the Glaucous Gull (Larus hyperboreus), Glaucous-winged Gull (Larus glaucescens), Glaucous Macaw (Anodorhynchus glaucus), and Glaucous Tanager (Thraupis glaucocolpa).

Slate gray is a gray color with a slight azure tinge that is a representation of the average color of the material slate.

Puce is the color of the belly of a flea. Puce is the French word for flea.

"Puce" has been in use as a color name in French since the 14th century.

There is a grayish tone of rose called rose quartz.

The first recorded use of rose quartz as a color name in English was in 1926.[20]

Cinereous is a color, meaning ashy gray in appearance, either consisting of or resembling ashes, or a gray color tinged with coppery brown. It is derived from the Latin cinereous, from cinis (ashes).

The first recorded use of cinereous as a color name in English was in 1661.[21]

The color displayed at right matches the color sample called taupe referenced below in the 1930 book A Dictionary of Color, the world standard for color terms before the invention of computers. However, the word taupe may often be used to refer to lighter shades of taupe today, and therefore another name for this color is dark taupe.

The first use of "taupe" as a color name in English was in the early 19th century (exact year is not known).[22]