Chapelcross was a Magnox nuclear power plant located near the town of Annan in Dumfries and Galloway in south west Scotland. It was the sister plant to Calder Hall in Cumbria, England, both commissioned and originally operated by the United Kingdom Atomic Energy Authority.

The primary purpose of both plants was to produce weapons-grade plutonium for the UK's nuclear weapons programme, but they also generated electrical power for the National Grid.

Chapelcross occupies a 92 hectare site on the location of former World War II training airfield, RAF Annan, located 3 km north east of the town of Annan in the Annandale and Eskdale district within the Dumfries and Galloway region of south west Scotland. The nearest hamlet is Creca.

Chapelcross was the sister plant to Calder Hall in Cumbria, England. Construction was carried out by Mitchell Construction and was completed in 1959.[1] The primary purpose was to produce plutonium for the UK's nuclear weapons programme (see WE.177). Electricity was always considered to be a by-product.

The Chapelcross Works was officially opened on 2 May, 1959 by the Lord Lieutenant of Dumfriesshire, Sir John Crabbe. It was initially owned and operated by the Production Group of the United Kingdom Atomic Energy Authority (UKAEA) until the creation of British Nuclear Fuels Limited (BNFL) in 1971 by an act of Parliament. The site then operated in conjunction with Calder Hall under the banner of BNFL’s Electricity Generation Business (EGB) until rebranding, relicensing and restructuring of the various nuclear businesses operated by HM Government under the umbrella legal entity of BNFL took place in April 2005.

Chapelcross had four Magnox reactors capable of generating 60 MWe of power each.[2] The reactors were supplied by the UKAEA and the turbines by C.A. Parsons & Company.[2]

Ownership of all of the site’s assets and liabilities was transferred to The Nuclear Decommissioning Authority (NDA), a new regulatory body created as a result of The Energy Act of 2004. The site was then operated under the two-tier Site Management Company/Site License Company (SMC/SLC) model by British Nuclear Group’s Reactor Sites business as SMC and Magnox Electric Ltd as the SLC. In June 2007, EnergySolutions LLC bought the Reactor Sites Management Company Ltd (consisting of two operational divisions, Magnox North and Magnox South) from British Nuclear Group.

Several significant events in 2001 persuaded BNFL to upgrade the fuel routes of both Calder Hall and Chapelcross to near modern standards at a cost of tens of millions of pounds to guarantee that a License Instrument would be granted by the NII to permission final defuelling: the engineering work is being carried out by BNS Nuclear Services (Formally Alstec).[3]

Decommissioning and the cooling towers

The Health and Safety Executive (HSE) granted consent to carry out decommissioning projects at Chapelcross under the regulations to Magnox Electric Ltd on 26 September 2005. The first visible sign of decommissioning was controlled demolition at 09.00 BST on 20 May 2007 of the four natural draught concrete cooling towers of the same hyperboloid design as conventional inland power stations such as Didcot, Drax, Ferrybridge and Fiddlers Ferry. The explosions were designed to remove a section of the cooling towers’ shells. Approximately two thirds of the circumference and two thirds of the shell legs were removed by the blasts, causing a controlled collapse of each tower. The charges were fired sequentially, reducing the 300 ft (91 m) high towers to an estimated 25,000 tons of rubble in less than 10 seconds. Those at Calder Hall were demolished on 29 September 2007.

Some local people (including site employees) were opposed to the obliteration of such a proud symbol of the region’s industrial heritage and contribution to the local economy and national defence. The towers were considered a local landmark that could be seen from a distance of up to fifty miles in good weather conditions. British Nuclear Group and the NDA prioritised conventional demolition over deplanting and post-operational clean-out (POCO) of the nuclear facilities on the site. A large part of the shell of tower 1 managed to resist the explosives despite having a visible bulge that resulted from a construction anomaly.[4]

The plant design was essentially the same as Calder Hall comprising four 180 MW(th) graphite moderated, carbon dioxide cooled nuclear reactors fuelled by natural abundance uranium (0.71% 235U) enclosed in magnesium-alloy cans; the principal difference being in plant layout. Since Chapelcross was commissioned from the outset as a four reactor site (the option for a further four reactors was not exercised) rather than separate two-reactor sites as at Calder ‘A’ and ‘B’ stations, the site layout was more compact. There is a single turbine hall housing all eight turbines which were originally rated at 23 MW(e) but progressively uprated to 30 MW(e) as the reactor thermal output was uprated to nominally 265 MW(th).

Reactor 1 had the same core design as Calder Hall (i.e. unsleeved), but the fuel channels of Reactors 2, 3 and 4 were fitted with graphite sleeves to allow the bulk moderator to run some 80°C hotter to limit the effects of in-service graphite damage due to irradiation. Two of the reactors were used to produce tritium for the UK’s strategic nuclear deterrent and therefore required enriched uranium fuel to offset the neutron absorbing effect of the lithium target material.

Liquid effluent is disposed of via a 5 km long pipeline to the Solway Firth. All environmental discharges are subject to an annual discharge authorisation which is regulated by the Scottish Environment Protection Agency (SEPA). 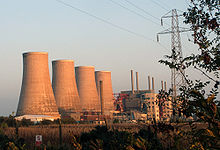 Chapelcross produced tritium for the Polaris and Trident strategic nuclear deterrents from about 1980 until 2005. This was achieved by neutron bombardment of lithium target material and the tritium gas extracted in the Chapelcross Processing Plant (CXPP). This facility was managed by BNFL on behalf of the Ministry of Defence (MoD). The material was transferred to Aldermaston via secure road convoys. Because of involvement in the defence programme, the site was not subject to international safeguards until 1998.

All information presented below is in the public domain and external hyperlinked references to official reports and information are included where available.

Because of known shrinkage of the graphite moderator bricks in the core due to in-service irradiation effects, some of the steel charge pans on top of them had become dislocated from their design position in the interstitial channel and were suspended from the Burst Can Detection (BCD) pipework. This was most prevalent in Reactor 1 because of the different core design to Reactors 2, 3 and 4. BNFL were unable to make an adequate safety case or effect an economic repair and therefore, Reactor 1 did not return to power from its annual outage in August 2001. The core of Reactor 4 was repaired but this reactor did not return to power after the repair.[5]

During routine defuelling activities on Reactor 3, a basket containing twenty-four low rated irradiated Magnox fuel elements fell a few feet within the discharge machine onto the door at the top of the fuel discharge well. Remote TV camera inspections revealed that twelve of the elements had fallen just over 80ft (24.4m) down the discharge well into a water filled transport flask at the bottom. The NII initiated an investigation because dropping irradiated fuel elements is a serious issue even when, as in this event, BNFL had advised NII that there had been no release of radiological activity.[6]

A small amount of Magnox Depleted Uranium leaked from some corroded mild steel drums due to rainwater ingress and leaching. MDU is a dense yellow powder that is less radiologically toxic than naturally occurring uranium but chemotoxic in a similar manner to lead. Owing to its high density and low solubility, it does not tend to disperse far and dry spills are easy to clean up. This material was stored at the larger sites, including Capenhurst in mild steel drums. BNFL has upgraded the fabric of the building and the original drums are being overpacked into stainless steel drums and dispatched to Capenhurst for long-term storage.[5]

Exposure of worker to an irradiated fuel element (First Quarter 2001)

The incident was classified as Level 1 (anomaly) on the International Nuclear Event Scale (INES).[7]

Cracks associated with brackets in Heat Exchanger 6 on Reactor 2 were discovered during a routine ultrasonic inspection. Metallurgical examination of samples of the defect showed that:

Fuel in a single channel in Reactor 2 that was loaded with fuel elements under evaluation for the commercial reactor programme experienced a partial blockage, attributed to the presence of graphite debris (see fuel element failure). The fuel overheated and the Magnox cladding failed, causing contamination to be deposited in one region of the core. The reactor was restarted in 1969 after successful clean-out operations and was the final reactor to cease operation in February 2004.