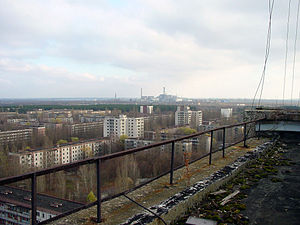 The abandoned city of Pripyat, Ukraine with the Chernobyl nuclear power plant in the distance.

57 accidents have occurred since the Chernobyl disaster in 1986. Two thirds of these mishaps occurred in the US.[1] The French Atomic Energy Agency (CEA) has concluded that technical innovation cannot eliminate the risk of human errors in nuclear plant operation.

An interdisciplinary team from MIT have estimated that given the expected growth of nuclear power from 2005 – 2055, at least four serious nuclear power accidents would be expected in that period.[1]

Globally, there have been at least 99 (civilian and military) recorded nuclear power plant accidents from 1952 to 2009 (defined as incidents that either resulted in the loss of human life or more than US$50,000 of property damage, the amount the US federal government uses to define nuclear energy accidents that must be reported), totaling US$20.5 billion in property damages. Property damage costs include destruction of property, emergency response, environmental remediation, evacuation, lost product, fines, and court claims.[2] Because nuclear power plants are large and complex accidents onsite tend to be relatively expensive.[3]

The 1979 Three Mile Island accident in Pennsylvania was caused by a series of failures in secondary systems at the reactor, which allowed radioactive steam to escape and resulted in the partial core meltdown of one of two reactors at the site, making it the most significant accident in U.S. history.[4]

The world's worst nuclear accident has been the 1986 Chernobyl disaster in the Ukraine, the only accident that has been rated as a level 7 event on the International Nuclear Event Scale.[5] The accident occurred at the Chernobyl Nuclear Power Plant after an unsafe systems test led to a rupture of the reactor vessel and a series of explosions that destroyed reactor number four. The radiation plume spread to the surrounding city of Pripyat and covered extensive portions of Europe with traces of radioactivity, leaving reindeer in Northern Europe and sheep in portions of England unfit for human consumption. A 30 kilometres (19 mi) "Zone of alienation" has been formed around the reactor.[6]

See also: Timeline of the Fukushima nuclear accidents and Nuclear power in Japan

This list is incomplete; please help to expand it.

The nuclear power industry has improved the safety and performance of reactors, and has proposed new safer (but generally untested) reactor designs but there is no guarantee that the reactors will be designed, built and operated correctly.[19] Mistakes do occur and the designers of reactors at Fukushima in Japan did not anticipate that a tsunami generated by an earthquake would disable the backup systems that were supposed to stabilize the reactor after the earthquake.[20][21] According to UBS AG, the Fukushima I nuclear accidents have cast doubt on whether even an advanced economy like Japan can master nuclear safety.[22] Catastrophic scenarios involving terrorist attacks are also conceivable.[19] An interdisciplinary team from MIT have estimated that given the expected growth of nuclear power from 2005 – 2055, at least four serious nuclear accidents would be expected in that period.[23][24] To date, there have been five serious accidents (core damage) in the world since 1970 (one at Three Mile Island in 1979; one at Chernobyl in 1986; and three at Fukushima-Daiichi in 2011), corresponding to the beginning of the operation of generation II reactors. This leads to on average one serious accident happening every eight years worldwide.[21]