A criticality accident, sometimes referred to as an excursion or a power excursion, is an accidental increase of nuclear chain reactions in a fissile material, such as enriched uranium or plutonium. This releases a surge of neutron radiation which is highly dangerous to humans and causes induced radioactivity in the surroundings.

Critical or supercritical nuclear fission (one that is sustained in power or increasing in power) generally occurs inside reactor cores and occasionally within test environments. A criticality accident occurs when a critical reaction is achieved unintentionally. Although dangerous, typical criticality accidents cannot reproduce the design conditions of a fission bomb, so nuclear explosions do not occur. The heat released by the nuclear reaction will typically cause the fissile material to expand, so that the nuclear reaction becomes subcritical again within a few seconds.

In the history of atomic power development, sixty criticality accidents have occurred in collections of fissile materials outside nuclear reactors and some of these have resulted in death, by radiation exposure, of the nearest person(s) to the event. However, none has resulted in explosions.[2] 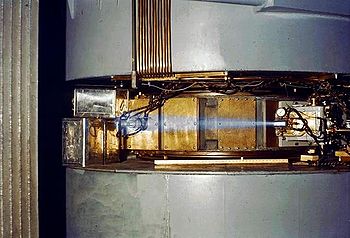 Image of a 60-inch cyclotron, circa 1939, showing an external beam of accelerated ions (perhaps protons or deuterons) ionizing the surrounding air and causing a blue glow. Due to the very similar mechanism of production, the blue glow is thought to resemble the "blue flash" seen by Harry Daghlian and other witnesses of criticality accidents. Though the effect is often mistaken for Cherenkov radiation, the two are distinct phenomena as explained in the article.

Criticality occurs when too much fissile material is in one place. Criticality can be achieved by using metallic uranium or plutonium or by mixing compounds or liquid solutions of these elements. The isotopic mix, the shape of the material, the chemical composition of solutions, compounds, alloys, composite materials, and the surrounding materials all influence whether the material will go critical, i.e., sustain a chain reaction.

The calculations that predict the likelihood of a material going into a critical state can be complex, so both civil and military installations that handle fissile materials employ specially trained personnel to monitor operations and prevent criticality accidents.

Criticality accidents are divided into one of two categories: 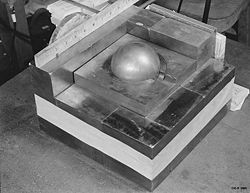 The sphere of plutonium surrounded by neutron-reflecting tungsten carbide blocks in a re-enactment of Harry Daghlian's 1945 experiment.[3]

Since 1945 there have been at least 60 criticality accidents. These have caused at least 21 deaths: seven in the United States, ten in the Soviet Union, two in Japan, one in Argentina, and one in Yugoslavia. Nine have been due to process accidents, with the remaining from research reactor accidents.[2]

Criticality accidents have occurred both in the context of nuclear weapons and nuclear reactors. 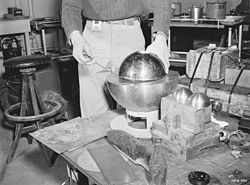 A re-creation of the Slotin incident. The inside hemisphere next to the hand is beryllium, with an external larger tamper under it, of natural uranium. The 3.5-inch-diameter (89 mm) plutonium "demon core" (the same as in the Daghlian incident) was inside, and is not visible.

Many criticality accidents have been observed to emit a blue flash of light and to heat the material substantially. This blue flash or "blue glow" is often incorrectly attributed to Cherenkov radiation, most likely due to the very similar color of the light emitted by both of these phenomena. This is merely a coincidence.

Cherenkov radiation is produced by charged particles which are travelling through a dielectric substance at a speed greater than the speed of light in that medium. The only types of charged particle radiation produced in the process of a criticality accident (fission reactions) are alpha particles, beta particles, positrons (which all come from the radioactive decay of unstable daughter products of the fission reaction) and energetic ions which are the daughter products themselves. Of these, only beta particles have sufficient penetrating power to travel more than a few centimeters in air. Since air is a very low density material, its index of refraction (around n=1.0002926) differs very little from that of a vacuum (n=1) and consequently the speed of light in air is only about 0.03% slower than its speed in a vacuum. Therefore, a beta particle emitted from decaying fission products would need to have a velocity greater than 99.97% c in order to produce Cherenkov radiation. Because the energy of beta particles produced during nuclear decay do not exceed energies of about 20 MeV (20.6 MeV for 14B is likely the most energetic[27]) and the energy needed for a beta particle to attain 99.97% c is 20.3 MeV, the possibility of Cherenkov radiation produced in air via a fission criticality is virtually eliminated.

Instead, the blue glow of a criticality accident results from the spectral emission of the excited ionized atoms (or excited molecules) of air (mostly oxygen and nitrogen) falling back to unexcited states, which happens to produce an abundance of blue light. This is also the reason electrical sparks in air, including lightning, appear electric blue. It is a coincidence that the color of Cherenkov light and light emitted by ionized air are a very similar blue despite their very different methods of production. It is worth remarking that the ozone smell was said to be a sign of high radioactivity field through Chernobyl liquidators.

The only situation where Cherenkov light may contribute a significant amount of light to the blue flash is where the criticality occurs underwater or in solution (such as uranyl nitrate in a reprocessing plant) and this would be visible only if the container were open or transparent.

Some people reported feeling a "heat wave" during a criticality event.[28][29] It is not known, however, whether this may be a psychosomatic reaction to the terrifying realization of what has just occurred, or if it is actually a physical effect of heating (or nonthermal stimulation of heat sensing nerves in the skin) due to energy emitted by the criticality event. For instance, while the accident which occurred to Louis Slotin (a yield excursion of around 3×1015 fissions) would have only deposited enough energy in the skin to raise its temperature by fractions of a degree, the energy instantly deposited in the plutonium sphere would have been around 80 kJ;[citation needed] sufficient to raise a 6.2 kg sphere of plutonium by around 100°C (specific heat of Pu being 0.13 J·g−1·K−1). The metal would therefore have reached sufficient temperature to have been detected a very short distance away by its emitted thermal radiation.[citation needed] This explanation thus appears inadequate as an explanation for the thermal effects described by victims of criticality accidents, since people standing several feet away from the sphere also reported feeling the heat. It is also possible that the sensation of heat is simply caused by the nonthermal damage done to tissue on the cellular level by the ionization and production of free radicals caused by exposure to intense ionizing radiation.

An alternative explanation of the heat wave observations can be derived from the discussions above regarding the blue glow phenomenon. A review of all of the criticality accidents with eyewitness accounts indicates that the heat waves were only observed when the fluorescent blue glow (the non-Cherenkov light, see above) was also observed. This would suggest a possible relationship between the two, and indeed, one can be readily identified. When all of the emission lines from nitrogen and oxygen are tabulated and corrected for relative yield in dense air, one finds that over 30% of the emissions are in the ultraviolet range, and about 45% are in the infrared range. Only about 25% are in the visible range. Since the skin feels infrared light directly as heat, and ultraviolet light is a cause of sunburn, it is likely that this phenomenon can explain the heat wave observations.[30]