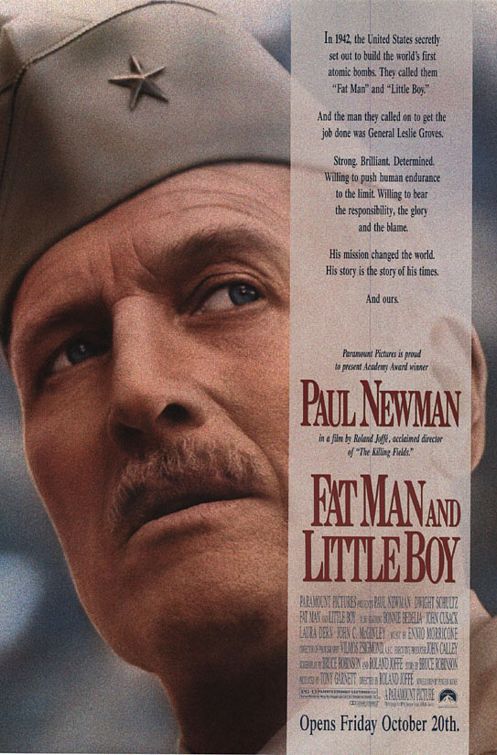 "Fat Man and Little Boy" (aka "Shadow Makers" in the UK) is a film that reenacts the , the secret endeavor to develop the first s during . The film is named after the s known by the code names "" and "", and also potentially as a reference to the portly Gen. Leslie R. Groves and the seemingly much younger , the respective military and scientific heads of the project, who dominate the film.

The film was directed by and written by Joffe and .

The film stars as Gen. Leslie R. Groves and as Robert Oppenheimer, as they meet and work together, both from strong backgrounds before the project began. General Groves had been a long-time soldier, now working inside the Pentagon and highly qualified to lead a top-secret weapons project. Professor Oppenheimer has been an upcoming star among the physics department at prestigious Berkeley.

stars as nurse Kathleen Robinson, and as her charming new friend, the young physicist Michael Merriman. Working with few protections from radiation during an experiment, Michael drops a radioactive component and retrieves it by hand, thinking to avoid disaster, but gets radiation sickness. In the base hospital, he talks with nurse Kathleen, but the radiation was too strong, and he develops the massive swelling and deformation, before dying a miserable death. The character of Merriman is fictional, but is loosely based on the popular young scientist Louis P. Slotin.

While the technical problems are being solved, military investigations try to thwart foreign espionage, especially from "s" who might have also associated with socialist organizations. The snooping reveals that Oppenheimer has had a young mistress, Jean Tatlock (), and he is ordered by the military to stop seeing her. After he meets with her and announces it's over, but unable to reveal the secret reasons why, she is unable to cope with the sudden heartache and is later found dead.

As the project continues, in multiple sites across America, technical problems and delays cause tensions and strife. To avoid a single-point-of-failure plan, two separate bomb designs are implemented: a large, heavy bomb imploded using (""), and an alternate design for a thin, less heavy bomb triggered in a shotgun design (""). The bomb development culminates in a live detonation in Nevada at the , where everyone watches in awe at the spectacle of the first mushroom cloud with roaring winds, miles away.

In the end, the Fat Man and Little Boy were both successful. Finally, mankind has developed, while ruining the lives of many separate individuals, technologies that can threaten all life on Earth.

The following are the cast members and their roles:

The film has been criticised for distortion for dramatic effect, and is also cited as an example of miscasting in its choices of Paul Newman, definitely not a portly actor, for the role of General Groves, and Dwight Schultz for the role of Oppenheimer. The film made under $4 million on its original release.

However, the readers have positively rated the film with an average rating of 6.4/10 stars in 2,343 votes.

* The miniseries about the Manhattan Project on PBS.