Darlington railway station, also known as Darlington Bank Top, is the main railway station for the town of Darlington, in the ceremonial county of County Durham, England. The station is located on the East Coast Main Line 232 miles (373 km) north of London Kings Cross.

The town is the location of the first commercial steam railway: The Stockton and Darlington Railway. The station itself is a Grade II* listed[1] Victorian structure, and winner of the Large Station of the Year award in 2005.[2] It has a full range of passenger facilities, including a buffet, newsagent, First Class Lounge and travel centre.

The first railway to pass through the area now occupied by the station was built by the Stockton and Darlington Railway, who opened their mineral branch from Albert Hill Junction on their main line to Croft-on-Tees on 27 October 1829. This branch line was subsequently purchased by the Great North of England Railway a decade later to incorporate into their new main line from York which reached the town on 30 March 1841. A separate company, the Newcastle & Darlington Junction Railway continued the new main line northwards towards Ferryhill and Newcastle, opening its route three years later on 19 June 1844.[3] This crossed the S&D at Parkgate Junction by means of a flat crossing which would in future years become something of an operational headache for the North Eastern Railway and LNER. The original Bank Top station where the two routes met was a modest affair, which was rebuilt in 1860 to accommodate the expanding levels of traffic on the main line. By the mid 1880s even this replacement structure was deemed inadequate and so the NER embarked on a major upgrade to facilities in the area. This included an ornate new station with an impressive three-span overall roof on the Bank Top site, new sidings and goods lines alongside it and a new connecting line from the south end of the station (Polam Junction) to meet the original S&D line towards Middlesbrough at Oak Tree Junction near Dinsdale. These improvements were completed on 1 July 1887, when the old route west of Oak Tree closed to passengers (although it remained in use for freight until 1967). 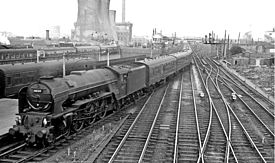 Express entering the station in 1961

Local legend states that it was Queen Victoria, stretching her legs at the station on a journey from London to Edinburgh, who demanded that an historical railway town such as Darlington must have a better station than it did at that time.[citation needed] The new station, with its broad island platform cost some £81,000 to construct[4] and soon became a busy interchange on the main East Coast route, thanks to its rail links to Richmond (opened in 1846), Barnard Castle and Penrith (1862/5) and the Tees Valley Line to Bishop Auckland (1842) and Saltburn (1861).

In 1928 it was the site of a rail crash in which two trains collided, killing 25 people.

The lines to Penrith (closed in 1962), Barnard Castle (1964)[5] and Richmond (1969) have now gone (along with the bays at the northern end of the station, now used for car parking), but the main line (electrified in 1991) and the Tees Valley route remain busy. It is also still possible to travel to Catterick Garrison and Richmond from here, by means of the Arriva North East-operated X26 and X27 buses (which have through National Rail ticketing arrangements). The same company also operated the Sky Express bus service to Durham Tees Valley Airport from the station, but this was withdrawn in January 2009 due to declining demand.[6]

Back in the 1980s a replica set of Darlington Railway Station was built for an episode of Noel's Saturday Roadshow for the BBC. 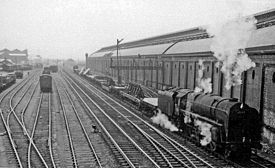 Down freight passing the station in 1961

Darlington is well served by trains on the East Coast Main Line, with regular trains to London King's Cross (via York), Newcastle, Glasgow and Edinburgh operated by East Coast. Two trains per hour run towards London and Newcastle for much of the day, with hourly services to Edinburgh. There are also several daily services to Dundee & Aberdeen and also a daily direct service to Inverness. Due to the introduction of the new ECML timtable on 22nd May 2011 East Coast now only provide on daily direct service from London King's Cross to Glasgow Central which calls at Darlington.

CrossCountry services between Edinburgh/Newcastle and Birmingham New Street and beyond (to Oxford and Reading and to Bristol Temple Meads, Plymouth and Penzance) also call here twice each hour, along with hourly First TransPennine Express trains between Newcastle and Manchester Airport via Leeds, Huddersfield and Manchester Piccadilly.

Northern Rail run their Tees Valley line trains twice hourly to Middlesbrough, Redcar and Saltburn (hourly on Sundays), whilst the Bishop Auckland branch has a service every two hours for most of the day, increasing to hourly during the morning and evening peaks. The company also operates Sundays-only trains to Hartlepool and Whitby, although the latter only run during the summer months. 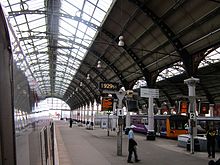 As part of the Tees Valley Metro, two new platforms will open on the eastern edge of the main station. There will be a total of 4 trains per hour, to Middlesbrough and Saltburn via the Tees Valley Line, and trains will not have to cross the East Coast Mainline when the new platforms are built.