See also: List of Mexican flags and Coat of arms of Mexico

The flag of Mexico (Spanish: Bandera de México) is a vertical tricolor of green, white, and red with the national coat of arms charged in the center of the white stripe. While the meaning of the colors has changed over time, these three colors were adopted by Mexico following independence from Spain during the country's War of Independence, and subsequent First Mexican Empire. The current flag was adopted in 1968, but the overall design has been used since 1821, when the First National Flag was created. The current law of national symbols, Law on the National Arms, Flag, and Anthem, that governs the use of the national flag has been in place since 1984.

Red, white, and green are the colors of the national liberation army in Mexico. The central emblem is the Aztec pictogram for Tenochtitlan (now Mexico City), the center of their empire. It recalls the legend that inspired the Aztecs to settle on what was originally a lake-island. The form of the coat of arms was most recently revised in 1968. A ribbon in the national colors is at the bottom of the coat of arms. Throughout history, the flag has changed four times, as the design of the coat of arms and the length-width ratios of the flag have been modified. However, the coat of arms has had the same features throughout: an eagle (it is not an eagle, but a caracara, a predatory falcon native to Latin America), holding a serpent in its talon, is perched on top of a prickly pear cactus; the cactus is situated on a rock that rises above a lake. The coat of arms is derived from an Aztec legend that their gods told them to build a city where they spot an eagle on a nopal eating a serpent, which is now Mexico City. The current national flag, the Fourth National Flag, is also used as the Mexican naval ensign by ships registered in Mexico.

Before the addition of the first national flag, people flags used during the War of Independence from Spain had a great influence on the design of the first national flag. It was never adopted as an official flag, but many historians consider the first Mexican flag to be the Standard of the Virgin of Guadalupe, which was carried by Miguel Hidalgo during the Grito de Dolores on September 16, 1810.[1] The Standard became the initial symbol of the rebel army during the Mexican War of Independence. Various other Standards were used during the war. José María Morelos used a flag with an image of the Virgin to which was added a blue and white insignia with a crowned eagle on a cactus over a three-arched bridge and the letters V.V.M. (Viva la Virgen María – "long live the Virgin Mary").[1] The Revolutionary Army also used a flag featuring the colors white, blue and red in vertical stripes. The first use of the actual colors—green, white and red—was in the flag of the unified Army of the Three Guarantees (pictured above) after independence from Spain was won.[2]

While similar to the national flag that is used today, the eagle in these arms is not holding a serpent in his talons and a crown has been affixed to the head of the eagle to signify the Empire. Variants of this flag that appeared in this period also included a naval flag that had the tricolor pattern, but only contained the eagle with the crown above its head. The military also used a similar, square, flag, but the eagle was larger than on the national flag. The national flag was officially decreed by Agustín de Iturbide in November 1821 and first officially used in July 1822. This flag was no longer used upon the abolishment of the empire.[3]

Reverse side of the flag.

The current national flag was adopted on September 16, 1968, and was confirmed by law on February 24, 1984. The current version is an adaptation of the design approved by presidential decree in 1916 by Venustiano Carranza, where the eagle was changed from a front-facing to a side-facing position.[2] Before the adoption of the current national flag, official flags have been used by the government. All of these flags used the tricolor pattern, with the only differences being the changes in the coat of arms, which was still charged in the center of the white stripe. One possible reason for the 1968 flag and arms change was that Mexico City was the host of the 1968 Summer Olympic Games.[7] Around this same time period, the plain tricolor flag that Mexico used as its merchant ensign was also legally abandoned. The reasoning is that without the coat of arms, the flag would not be the Mexican flag; it would have become the Italian flag.[8]

There was also debate in 1984 about how the coat of arms will be depicted on the national flag, including the reverse. To solve this problem, a PAN deputy proposed a change to the Law of the National Arms, Flag and Anthem that same year to allow for the eagle to face to the right when the reverse of the flag is displayed.[9] In 1995, the law was changed to include the following; 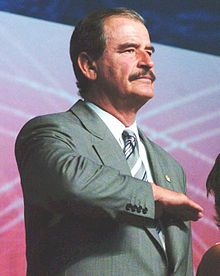 The civil salute given by former Mexican President Vicente Fox

When the flag is paraded in front of a crowd, those in military uniform must present a salute according to military regulations. Civilians who are present give the following salute to the national flag: standing at attention (firme), they raise their right arms and place their right hands on their chests, in front of the heart. The hand is flat and the palm of the hand is facing the ground. This salute is known as the El saludo civil a la Bandera Nacional ("The Civil Salute to the National Flag"). When the President is acting in the capacity of the Head of the Armed Forces, he salutes the national flag with a military salute. When the national anthem is played on television to open or close daily programming, the national flag will be shown at the same time.[11] During certain times of the year, the flag is flown by both civilians and government personnel. Mostly, these events coincide with national holidays and days of significance to the country. During some of these occasions, the flag will be flown at half-mast to honor the death of important Mexicans. These dates are listed in Article 18 of the Law of the National Flag, Arms and Anthem. The national Día de la Bandera (Flag Day) celebration occurs on February 24. On this day in 1821, all the factions fighting in the War of Independence joined together to form the Army of the Three Guarantees in response to the Plan de Iguala, which was signed by Vicente Guerrero and Agustín de Iturbide, declaring Mexico officially an independent country. General Vicente Guerrero was the first military official who swore allegiance to the national flag.[2] Another flag tradition is that before every Olympics in which Mexico is a participant, the President hands a flag over to the flag bearer, chosen by their peers, to carry with them to the host city.[12] 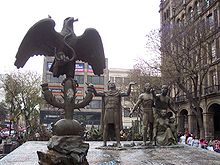 Mexican sculpture about the founding of Tenochtitlan. 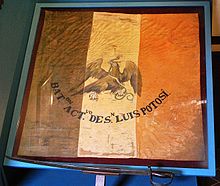 The flag songs are dedicated to the flag day, it is a national holiday in Mexico. Flag Day is celebrated every year on February 24 since its implementation in 1937. It was established by President of Mexico General Lázaro Cárdenas before the monument to General Vicente Guerrero, first to pledge allegiance to the Mexican flag and Agustin de Iturbide;

There are two variants of the national flag that are mostly used by the state and federal governments, the difference between the national flag and the variants are the designs of the coat of arms. In the first variant, which is used by the President of Mexico and secretaries of federal bodies, the entire coat of arms is coloured gold, with the exception of the tricolour ribbon, which is green, white and red, and with the stone, lake and talons of the eagle coloured in silver. In the second variant, the entire coat of arms is coloured gold, even the ribbon, lake, stone and talons. The second variant is used mostly by State governments and federal bodies who are not able to use the first variant.[13]

The image of the flag is protected under law. A special permit is needed to broadcast its image. In February 2010, MTV Mexico controversially cancelled a much-publicised broadcast of an episode of South Park, called Pinewood Derby, featuring the flag, because it claimed that the permit had not been issued.

In 2008, Mexican pop singer Paulina Rubio was fined for posing nude wrapped in the flag in a photo shoot for a Spanish magazine.[16] 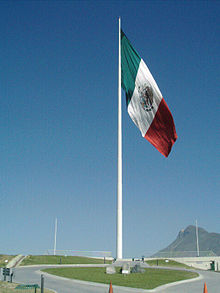 In 1999, President of Mexico Ernesto Zedillo started a program erecting giant flags across the country. Directed by the Secretariat of National Defense, the banderas monumentales (monumental flags) were placed in various cities and spots, most of which are of great significance to the nation. In a decree issued on July 1, 1999 by Zedillo, the flags were to be placed in Mexico City, Tijuana, Ciudad Juárez, and Veracruz. The decree also stipulated for the flags to measure 14.3 meters by 25 meters, which are raised on flag poles that are 50 meters high. After these initial monumental flags were created, cities such as Ensenada, Nuevo Laredo and Cancún were reported to have their own monumental flags. Smaller flags, called banderas semi-monumentales, have been erected in smaller towns and at various educational institutes.[18]

As of December 22, 2010 the biggest Mexican flag in the world is now located in Piedras Negras, Coahuila.[19] Located at the Gran Plaza (Great Plaza) right across from International Bridge I connecting Piedras Negras with Eagle Pass, Texas. The pole is 120 meters in height and weighs 160 tons making it the tallest one in Latin America and second tallest in the world [20]. The flag measures 60 by 34 meters and weights 420 kilograms.[21]

Mexico's first largest monumental flag was the one located at the Mirador del Obispado in Monterrey (northeast) with a pole of 120 tons and 100.6 meters in height. The flag measures 50 by 28.6 meters and weighs 230 kilograms, four times the size of most other monumental flags at the time. It is located at the top of the Cerro del Obispado (Bishopric Hill) at an altitude of 775 meters above the sea level (city's altitude 538 meters).[22] There is another monumental flag of a similar size than Monterrey's in the city of Dolores Hidalgo, Guanajuato, cradle of Mexican Independence.