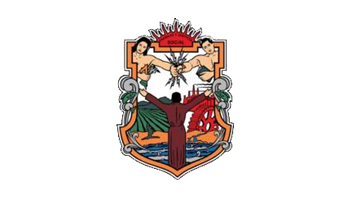 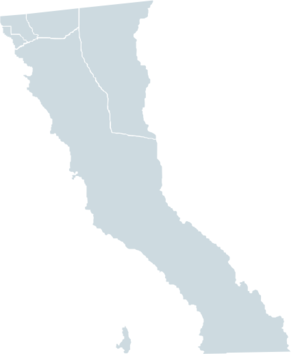 The state has a population of 2,844,469 (2005 census), much more than the sparsely populated Baja California Sur to the south. Over 75% of the population lives in the capital city, , or in . Both these cities are close to the U.S. border. Other important cities include Ensenada, San Felipe, and . The population of the state is composed of , mostly immigrants from other parts of , and, as with most northern Mexican states, a large population of Mexicans of European ancestry, and also a large minority group of , and Indigenous descent. Additionally, there is a large immigrant population from the due to its proximity to San Diego and the cheaper cost of life compared to San Diego. There is also a significant population from . Many immigrants moved to Baja California for a better quality of life and the number of higher paying jobs in comparison to the rest of Mexico and .

Baja California is the twelfth state by area in Mexico. Its geography ranks from beaches to forests and deserts. The backbone of the state is the Sierra de Baja California; where the Picacho Del Diablo, the highest point of the peninsula, is located. This mountain range effectively divides the weather patterns in the state. In the northwest, the weather is semi-dry, mediterranean. In the narrow center, the weather changes to be more humid due to altitude. It is in this area where a few valleys can be found, such as the Valle de Guadalupe, the major wine producer area in Mexico. To the east of the mountain range, the dominates the landscape. In the south, the weather becomes drier and gives place to the Vizcaino Desert. The state is also home to numerous islands in both of its shores. In fact, the westernmost point in Mexico, the , is part of Baja California. The Coronado, Todos Santos and Cedros Islands are also on the Pacific Shore. On the Gulf of California, the biggest island is the Angel De La Guarda, separated from the peninsula by the deep and narrow Canal de Ballenas.

Baja California has two sea shores. It borders the to the west and the Gulf of California to the east. Even though the state is not large in area, its geography is very diverse. The Sierra de Baja California (also known as the ) runs in the middle of the state with different denominations. The two most important are the Sierra de Juarez and the Sierra de San Pedro Martir. These ranges are home to forests similar to those in Southern California. The Picacho del Diablo is the highest peak in the whole peninsula, offering spectacular views of the Gulf of California. Lying in between these mountain ranges, there are some valleys that are suitable for agriculture such as the Valle de Guadalupe and the Valle de Ojos Negros. The mild weather makes this area excellent for the production of citrus fruits and grapes. This area is also rich in minerals. The mountain range gets closer to the Gulf of California towards the south of the state and the western slope becomes wider, forming the Llanos del Berrendo in the border with Baja California Sur.

The cool winds from the Pacific Ocean and the cold make the weather along the northwestern coast pleasant year round. The coastal cities of Playas de Rosarito and have the one of the nicest weather patterns in the whole Mexico. But due to the California current, rains from the north barely reach the peninsula and this makes the weather drier towards the south. The area becomes a desert south of El Rosario River. This desert, however, is rich in succulents such as the Cardon, Boojum tree, Ocotillo and others. These plants can flourish in part due to the coastal fog. Driving along MX-1 provides a good view of this area.

There are numerous islands on the Pacific shore. is the remote outpost to the west and it is home to big colonies of sea lions. In Cedros Island there is a small community living mostly on fishing. The Todos Santos Islands, in front of Ensenada, are popular with surfers offering some of the highest waves worldwide.

To the east, the Sonoran Desert enters the state from both California and Sonora. Some of the highest temperatures in Mexico are recorded in or nearby the Mexicali Valley in the northeast. However, with irrigation from the Colorado River, this area has become truly an agricultural center. The Cerro Prieto geothermical province is nearby Mexicali as well; producing about 80% of the electricity consumed in the state and enough more to export to California. The Laguna Salada, a saline lake below the sea level lying in between the rugged Sierra de Juarez and the Sierra de los Cucapah, is also in the vicinity of Mexicali. The highest mountain in the Sierra de los Cucapah is the Cerro del Centinela or Mount Signal.

The state is also blessed with numerous beaches on its east coast. Fishing and touristic towns such as San Felipe and Bahia de Los Angeles are a major attraction for people in search of adventure, nice beaches and fresh fish. The area south of San Felipe is basically undeveloped and pristine beaches can be found in many bays. All of the islands in the Gulf of California, on the Baja California side, belong to the municipality of Mexicali.

The main source of water in the state are the , which empties in the Gulf of California, and the , serving the cities of Mexicali and Tijuana. The rest of the state depends mostly on wells and a few dams.

The first humans came to the peninsula at least 11,000 years ago, probably following the Pacific coast down from . At the time of European contact, two main native groups were present on the peninsula. In the south were the Cochim&iacute;. In the north were several groups belonging to the Yuman linguistic family, including the , , , , and . These peoples were diverse in their adaptations to the region. The Cochimí of the peninsula's Central Desert were generalized hunter-gatherers who moved frequently; however, the Cochimí on off the west coast had developed a strongly maritime economy. The Kiliwa, Paipai, and Kumeyaay in the better-watered northwest were also hunter-gatherers, but that region supported denser populations and more sedentary lifeways. The Cocopa and Quechan of northeastern Baja California practiced agriculture in the floodplain of the lower Colorado River.

Europeans reached the present state of Baja California in 1539, when reconnoitered its east coast on the and explored the peninsula's west coast at least as far north as Cedros Island. returned to the east coast and ascended the lower Colorado River in 1540, and completed the reconnaissance of the west coast in 1542. again surveyed the west coast in 1602, but outside visitors during the following century were few.

The Jesuits founded a permanent mission colony on the peninsula at Loreto in 1697. During the following decades, they gradually extended their sway throughout the present state of Baja California Sur. In 1751-1753, the Croatian Jesuit mission-explorer made overland explorations northward into the state of Baja California. Jesuit missions were subsequently established among the Cochimí at Santa Gertrudis (1752), San Borja (1762), and Santa Mar&iacute;a (1767).

After the expulsion of the Jesuits in 1768, the short-lived administration (1768-1773) resulted in one new mission at San Fernando Velicat&aacute;. More importantly, the 1769 expedition to settle Alta California under and resulted in the first overland exploration of the northwestern portion of the state.

The Dominicans took over management of the Baja California missions from the Franciscans in 1773. They established a chain of new missions among the northern Cochimí and western Yumans, first on the coast and subsequently inland, extending from El Rosario (1774) to Descanso (1817), just south of Tijuana.

*1804: The Spanish colony of California was divided into Alta ("Upper") and Baja ("Lower") California at the line separating the missions in the north from the Dominican missions in the south.The colonial governors were:
*1804 - 1805 José Joaquín de Arillaga (s.a.)
*1806 - 1814 Felipe de Goycoechea
*1814 -
*1848: is annexed by the United States.
*1853: Soldier of fortune William Walker captures La Paz, declaring himself President of the Republic of Lower California. The Mexican government forces his retreat after several months.
*1884: Luis Huller and obtain a concession covering much of the present state, in return for promises to develop the area. [cite journal |last=de Novelo |first=Maria Eugenia Bonifaz |title=Ensenada: Its background, founding and early development |journal=The Journal of San Diego History |year=1984 |issue=Winter |volume=30 |url=http://www.sandiegohistory.org/journal/84winter/ensenada.htm |accessdate=2008-07-20]
*1905: The Magonista revolutionary movement begins.
*1911: Mexicali and Tijuana are captured by the Partido Liberal Mexicano (PLM), but soon surrender to Federal forces.
*1930: Baja California is further divided into Northern and Southern territories.
*1952: The "North Territory of Baja California" becomes the 29th state of Mexico, . The southern portion, below 28°N, remains a federally administered territory.
*1974: The "South Territory of Baja California" becomes the 31st state, .
*1989: of the PAN becomes the first non-PRI governor of Baja California and the first opposition governor of any state since the Revolution.

The racial make-up of the state is approximately 40% White/European (not limited to Mexican or/and Spanish descent), 36% Mestizo (Mixed Amerindian and European), 9% east Asian (predominantly Chinese, Korean and Japanese), the remaining 15% is Native American (of Mexican and Central American origins, but includes s from the U.S. long settled in Northwest Mexico since the 1850s) and less than 1% Black African.

Historically, the state had sizable east Asian immigration, esp. Mexicali has a large Chinese community, as well from the Philippines both under Spanish and later US rule (1898-1946) settled in the state in much of the 19th and 20th centuries, and Tijuana is a major port of entry for east Asians entering the U.S. ever since the first s were present in California.

Also a significant number of middle easterns such as Lebanese and settle near the U.S. border, and small waves of Russian settlers in the early 20th century, usually members of the sect of the church fled the Russian Revolution of 1917 when the Soviet Union took power, had established a few villages along the Pacific coast south of Ensenada. Fact|date=March 2008

In the past two decades large numbers of migrants from southern Mexican states have arrived to work in agriculture (esp. the Mexicali Valley and nearby Imperial Valley, California, US) and manufacturing. The cities of Tijuana and Mexicali grew as a result of migrants, primarily are those who sought US citizenship and those temporary residents awaiting for their entry into the United States are called "Flotillas", which is Spanish for "to float".

There is also a sizable immigrant community from Central and South America, and from the United States and Canada. An estimated 200,000+ American expatriates live in the state, especially in coastal resort towns such as *Rosarito and San Felipe, known for affordable homes purchased by retirees who continue to hold US citizenship. also has a large American population (second largest in Mexico next to Mexico City), particularly for its cheaper housing and proximity to San Diego. Most Americans that live in Tijuana work in San Diego, earning higher wages.

* See .Baja California has one of the best educational programs in the country, with first places in schooling and achievement.

The State Government provides education and qualification courses to increase the workforce standards, such as School-Enterprise linkage programs which helps the development of labor force according to the needs of the industry.

The state has 32 universities offering 103 professional degrees. These universities have 19 Research and Development centers for basic and applied investigation in advanced projects of Biotechnology, Physics, Oceanography, Digital Geothermal Technology, Astronomy, Aerospace, Electrical Engineering and Clean Energy, among others. At this educational level supply is steadily growing. Baja California has developed a need to be self-sufficient in matters of technological and scientific innovation and to be less dependent on foreign countries. Current businesses demand new production processes as well as technology for the incubation of companies. The number of various graduate degrees offered, including Ph.D. programs, is 121. The state has 53 graduate schools.