Döbling is the 19th District in the city of Vienna, Austria (German: 19. Bezirk, Döbling, Doebling). It is located on the north end from the central districts, north of the districts Alsergrund and Währing.[2] Döbling has some heavily populated urban areas with many residential buildings, and borders the Vienna Woods.[1][2] It hosts some of the most expensive residential areas such as Grinzing, Sievering, Neustift am Walde and Kaasgraben and is also the site of a large number of Heurigen restaurants. There are also some large Gemeindebauten, including Vienna's most famous one, the Karl-Marx-Hof.

Also located in Döbling is the American International School of Vienna.

Nearly 32.6% of the Döbling district area is land (compared to Vienna city-wide as 33.3%). To 85.2% involves Housing areas; the proportion of Betriebsbaugebiete, as 2.2% of the district area, is very low (Vienna 7.6%). With a greenspace share as 51.8% (48.3% for Vienna), Döbling is the 5th greenist district of Vienna. It accounts for 14.9% of district land as agricultural land, while the vineyard here plays the biggest role around Grinzing, Nußdorf, Sievering, Neustift am Walde and Salmannsdorf. Further 25.4% of the district is forested, plus 5.3% in meadows, 2.7% in small gardens, 2.5% in parks, and 0.9% as sports and recreational areas. The remainder district territory has 11.0% in traffic/transport and 4.6% on water. While the proportion of water is higher in relation to the whole city of Vienna, the proportion on traffic is below. 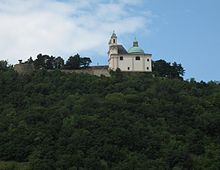 Across the large proportion of the Vienna Woods in Döbling, lie numerous hills of Vienna. Many lie on the border with Lower Austria and the neighboring districts. The highest summit is Hermannskogel (542 m, 1778 ft); however, the symbols of Döblings are the Kahlenberg (484 m, 1588 ft) and the nearby Leopoldsberg (427 m, 1401 ft). Other hills in this region are: the Reisenberg, Latisberg, Vogelsangberg, Dreimarkstein and Nußberg. Besides, there are partially built-up elevations in Döbling, such as Hohe Warte in Heiligenstadt, the Hungerberg in Grinzing, and the Hackenberg in Sievering. 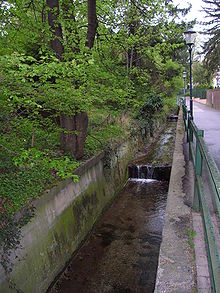 In the district zone, numerous streams originate, but now are mostly hard-installed or led as stream canals. Originally they all flowed, with the exception of the Waldbach (forest stream), into the Danube canal. Because the catchment areas of the streams lie in the sandstone zone of the Viennese forest, the streams can and were able to grow on a multiple of its normal water quantity. This led again and again to destructive flood waters, especially along the Krottenbach. The Krottenbach was the most important stream in Döbling, and is led practically perfectly as a stream canal. It includes the area behind the federal secondary school Billrothstraße, underground, and through Sievering, joins into the Arbesbach (Erbsenbach) stream, which today in the upper run, still flows openly until Obersievering.

The Nesselbach passes yet to the Krapfenwaldl openly, before it unites underground with the Reisenbergbach stream in Grinzing. The Reisenbergbach stream passes openly at the same time yet until shortly before the center of Grinzing. Almost entirely in the open, the Schreiberbach stream passes up to Nußdorf and the Waldbach stream at Kahlenbergerdorf. Through diverting water, the Döblinger Bach stream has entirely disappeared. This sprang originally in the Cottage and flowed in the Spittelau into the Danube Canal. 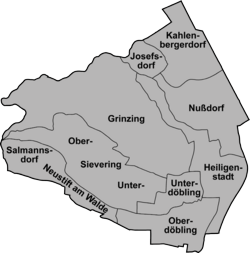 Döbling is formed by more, newer self-sufficient communities, including:

Döbling was first mentioned in 1114 as "de Teopilic". The name derives from the Slavic * topl’ika ("swampy waters" or "swampy place").[3] The name "Döbling" relates to the lake of the Krottenbach stream, while further possibility of interpretation derives from Old Slavic Toplica ( "warm stream"). Later spellings of the place-name were for example Toblich, Töbling and Tepling. In the formation of the district 1890/92, the name was finally "Döbling", from the largest municipality, Oberdöbling, in the incorporated district. 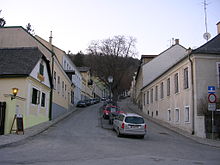 The district Döbling had been settled over 5,000 years ago, while the area Döbling-Nußdorf-Heiligenstadt next to the area Simmering-Landstraße probably represents the oldest settlement area in the Vienna area. Known is that on the Leopoldsberg hill, a weapon-bearing village with a fortified tower existed in which the inhabitants of surrounding villages gathered at risk. About the residents of that time, little is known; science refers to them as makers of "Donauländischen" (Danube-land) culture; they were not however Indo-Germanic. These penetrated into the Vienna area until one thousand years later, where the resident population mixed with the immigrant Illyrians and Celtic people. The actions of the Romans, at the current site of Döbling, is revealed by several findings. So found were: in Heiligenstadt a fortified tower of the Limes (border wall); in Sievering a Mithraeum temple was found; and excavations in Heiligenstadt's church revealed a Roman cemetery. In Sievering in Roman times, a great quarry existed, with a large worker settlement. A further means of subsistence of the population was the vineyard, which presumably already operated before the Romans arrived. Otherwise, the people conducted agriculture for their own needs.

In Roman times, the garrison town Vindobona was established to cover a part of today's 1st District, the Innere Stadt. Within the boundaries of Döbling a tower of the Roman defence wall, the limes, remnants of a temple and tombstones from a cemetery have been unearthed. A quarry located in today's Sievering was operated in Roman times and would have been staffed by local quarry men.

Throughout the centuries the suburb, due to its strategic location (elevated in respect to the centre of Vienna) was occupied and often looted. The decisive encounter of the Battle of Vienna in 1683 was fought on September 12, between Jan III Sobieski and the forces of the Ottoman Empire, commanded by the Grand Vizier Kara Mustafa Pasha.

Due to the hilly terrain, large forested areas - used as hunting grounds by the nobility - remained between the creeks and villages, spread throughout the district. The topology also attracted wine growers. This combination increased the prosperity of the suburb, as noblemen built villas and hunting lodges whilst the burghers of Vienna relaxed at the Heurigen wine-gardens. The existing villages expanded, as the population increased, until the district "Döbling" was established at the end of the 19th century, in 1892.

In the following years, Döbling developed as a district for the prosperous middle and upper class. In the period of the First Republic between WWI and WWII the Social Democrats also planned and erected many blocks of public housing. The Karl-Marx-Hof is one of the largest of these settlements (Siedlungen). The suburb of Döbling had a high percentage of Jewish residents and maintained a synagogue in the district. In the Reichskristallnacht this synagogue (like almost all others in Vienna) was destroyed.

[Parts of this article were translated from German Wikipedia.]