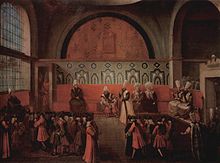 The Grand Vizier giving an audience "under the dome"

Grand Vizier, in Turkish Vezir-i Azam or Sadr-ı Azam (Sadrazam) (in Ottoman Turkish: صدر اعظم or وزیر اعظم), deriving from the Arabic word vizier (وزير), was the greatest minister of the Sultan, with absolute power of attorney and, in principle, dismissable only by the Sultan himself.[1] He held the imperial seal and could convene all other viziers to attend to affairs of the state; the viziers in conference were called "Kubbealtı viziers" in reference to their meeting place, the Kubbealtı ('under the dome') in Topkapı Palace. His offices were located at the Sublime Porte. "Grand Vizier" (Vazīr-e Azam) is also the official Urdu title of the Pakistani Prime Minister (ministers are titled "vizier").

During the nascent phases of the Ottoman state, "Vizier" was the only title used. The first of these Ottoman Viziers who was titled "Grand Vizier" was Çandarlı Kara Halil Hayreddin Pasha. The purpose in instituting the title "Grand Vizier" was to distinguish the holder of the Sultan's seal from other viziers. The initially more frequently used title of vezir-i âzam was gradually replaced by sadrazam, both meaning grand vizier in practice. Throughout Ottoman history, the grand viziers have also been termed sadr-ı âlî ('high vizier'), vekil-i mutlak ('absolute attorney'), sâhib-i devlet ('holder of the state'), serdar-ı ekrem, serdar-ı azam and zât-ı âsafî ('vizieral person').

The court of the Grand Vizier Jafar al-Barmaki.

In the Köprülü Era (1656–1703) the Empire was controlled by a series of powerful grand viziers. The relative ineffectiveness of the sultans and the diffusion of power to lower levels of the government was a feature of the Köprülü Era.

After the Tanzimat period of the Ottoman Empire in the 19th century, the grand viziers came to assume a role more like that of the prime ministers of contemporary Western monarchies.