Marius Job Cohen (Dutch pronunciation: [ˈmaːrijʏs ˈjɔp koːˈɦɛn]; born October 18, 1947 in Haarlem) is a Dutch social democratic politician and former legal scholar of Jewish background. Since 2010 he has been the leader of the Labour Party (Partij van de Arbeid - PvdA) and since June 17, 2010 he has been a member of the House of Representatives, where he also is the Parliamentary group leader of the Labour Party.

Cohen obtained his Master of Laws degree at the University of Groningen (1971) and his PhD at Leiden University (1981). In 1983 he became a law professor of methods and techniques and in 1991 rector magnificus at Maastricht University.

His parents both studied history and became high school teachers of history.[8][10] They were liberal Jews, and due to the persecution of Jews, they were forced into hiding until the end of World War II.[8] His paternal grandparents Hendrik Cohen and Flora Polak both died in the Bergen-Belsen concentration camp in 1945.[11] After the war, his father worked at the Dutch Institute for War Documentation.[12] Later he became a professor of medieval history and a rector magnificus at Leiden University.[13][14] His mother became a member of the city council of Heemstede. His parents were both early members of the Labour Party.[8]

Cohen went to a public primary school in Heemstede. He attended the secondary school Stedelijk Gymnasium in Haarlem from 1960 to 1966. He studied Dutch public law at the University of Groningen from 1966 and obtained his Master of Laws degree in 1971. During his student years, he was a member of the student association Vindicat atque Polit.

Cohen married his wife Lidie on 2 July 1972 in Groningen. She studied Dutch language in Groningen and was a high school teacher. She has multiple sclerosis and is in a wheelchair. Cohen and his wife have two children, son Jaap (born 1980) and daughter Lotje (born 1983).[15]

Between 1 September 1971 and 1 September 1981, Job Cohen held a scientific position at the Bureau Research of Education at Leiden University. He obtained a doctorate (PhD) from this university in June 1981, with a dissertation on the rights of university students.[16]

On 1 September 1981 he joined the State University of Limburg in a higher scientific capacity, and was chairman of the commission that prepared the establishment of a faculty of law. On 1 September 1983 Cohen became professor of methods and techniques at the faculty of law; on 1 January 1991 he also became rector magnificus of the State University of Limburg. He resigned from this position to become State Secretary for Education and Sciences in 1993.

In 1995 he returned to his position in Maastricht as professor and rector magnificus at Maastricht University (the former State University of Limburg). From 1 January 1998, he took a sabbatical year, but he resigned in August 1998 when he became State Secretary for Justice.

Cohen has received two honorary degrees for his contributions to law and society, one in 2007 from the University of Windsor[17] and one in 2008 from the Radboud University Nijmegen.[18]

State Secretary for Education and Sciences

On 2 July 1993, Cohen became State Secretary (deputy minister) for Education and Sciences in the third cabinet of Ruud Lubbers, under education minister Jo Ritzen. In Cohen's portfolio were higher and academic education, science policy, and adult education. The term of this post expired after a year and Cohen returned to his academic post in Maastricht.

Member of the Senate

From 13 June 1995, Cohen was a member of the Senate of the Netherlands. Between 1 August 1996 until he resigned from the Senate on 3 August 1998, he was also the parliamentary group leader of the Labour Party in the Senate.

During his period in the Senate, he also worked for the Maastricht University, where he began a sabbatical year on 1 January 1998. In February 1998 however, he took on the function of interim-director of the broadcasting organization VPRO, lasting until 15 August.

On 3 August 1998, he resigned from the Senate to take up the position of State Secretary for Justice in the second cabinet of Wim Kok, dealing chiefly with immigration. In this capacity he was responsible for a new immigration law, intended to restrict entry of refugees to "genuine cases".

Job Cohen and President of Russia Vladimir Putin in 2005

He resigned his position as State Secretary on 31 December 2000 in order to take up the position of Mayor of Amsterdam (burgemeester) on 15 January 2001. Mayors of Dutch cities are appointed by the cabinet in the name of the monarch.[19]

At midnight on 1 April 2001, Cohen became the first public official to wed same-sex couples, following the passing of legislation opening up marriage to people of the same gender (see Same-sex marriage in the Netherlands).[20]

On 2 February 2002, Job Cohen performed the civil marriage of Prince Willem-Alexander and Máxima Zorreguieta in the Beurs van Berlage in Amsterdam.[21]

In November 2004, controversial film maker Theo van Gogh was killed in Amsterdam by a Muslim extremist. Time awarded Cohen the title "European Hero" in 2005, for his inclusive approach towards the Muslim community after the murder, defusing tension in the city.[22]

Cohen found himself thrown into the role of mediator between the city's Muslims, the original Dutch population and other groups in the cultural and racial mix. Almost half Amsterdam's residents are of non-Western descent, a majority of them Muslims."Islam is here to stay, in this country, in this city (...) We have to deal with Islam as a fact, not whether we like it. So the real question is how to get on with each other." Cohen took pride in the fact that in Amsterdam no violence or arson occurred in response to the killing.[23] By his visiting ethnic groups, organizing debates among religious leaders and his listening and promoting dialogue, he received from opponents the mocking nickname of "tea drinker" - an image that would be exploited by them when he returned in the Dutch national politics in 2010.[24]

On 27 January 2006 Cohen announced he would be willing to serve a second term as mayor of Amsterdam. On 12 July 2006 the municipality of Amsterdam almost unanimously (Democrats 66 opposed, being in favour of an elected mayor) supported Cohen to prolong his career as a mayor after 15 January 2007 when his first term ended. The Queen's Commissioner Harry Borghouts of North Holland will now have to offer this advice to the Ministry of Internal Affairs.

Cohen's politics towards ethnic minorities in Amsterdam is characterized by the slogan "keeping things together" (de boel bij elkaar houden). On 2 May 2006 Immigration Minister Rita Verdonk of the centre-right VVD accused Amsterdam of becoming a "banana republic", with a lax safety policy: she cited the criminal liquidations and the disturbance caused by young people as examples of this. In the yearly crime meter of the Algemeen Dagblad Amsterdam did not perform particularly badly in safety policy and crime fighting, one of the reasons for this is Cohen's targeted approach towards those who commit multiple crimes (veelplegers). Cohen stated that his policy which combines soft and hard approaches, fighting crime and fighting the causes of crime, was the key to his successful safety policy.

In 2006 the World Mayor organization determined Cohen to be runner-up in the award for World Mayor of 2006, behind Melbourne mayor John So, and ahead of Harrisburg mayor Stephen R. Reed. World Mayor praised Cohen's leadership following the murder of Theo van Gogh in 2004, and his efforts at bringing together the diverse population of Amsterdam.[25][26]

In late 2007, Cohen moved to reduce prostitution in Amsterdam, following allegations that Hells Angels and other organized criminals had taken over the prostitution industry. The city council bought 18 buildings in the red light district De Wallen from Charlie Geerts in order to convert them into upscale establishments and revoked the license of the luxury brothel Yab Yum.[27][28] 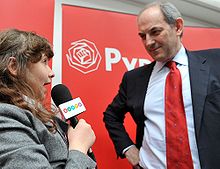 On 12 March 2010, Wouter Bos resigned as leader of the Labour Party. Bos named Cohen as candidate for the position, which he accepted. At the subsequent elections, Cohen was a candidate for Prime Minister. He was expected to be a strong opponent to Geert Wilders and was described in the press as "authoritarian but enlightened."[29] Exit polls showed the Labour Party as the second largest with 30 seats and 19.6% of the total vote.[30] Eventually his opponent Mark Rutte of the VVD became the Prime Minister of The Netherlands.