The game centers around two original characters created for the game named Reiji Arisu and Xiaomu. The two of them work for a special unit called Shinra and they are tasked with investigating spirit and otherworldly disturbances. They are initially investigating a strange "sleeping sickness" in the Shibuya area of Japan, when it becomes apparent that something much larger is at stake. Characters, both good and evil, from other times and other worlds begin appearing in Japan in the year 20XX. 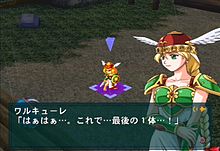 Felicia and King II fighting together.

The game is a hybrid of an action-RPG and a tactical-RPG. Movement is done on a square grid with turns being determined by figuring out which character has the highest AP (this AP system is comparable to the CT system used in Final Fantasy Tactics). On the player's turn, he or she can move his character into position and choose to attack an enemy.

At this point the game switches into the action-RPG portion. The player has a number of "Branches" they can use. Each direction on the directional pad combined with the circle button will perform an attack. Each attack uses up 1 branch. If the player performs a certain number of Aerial Chains (hitting the enemy in mid-air), they will gain bonuses, such as items, super meter, extra damage, more branches to use in this turn. Bonuses other than items are converted into extra Experience Points at the end of an attack sequence. Upon filling up the character's Special Gauge they can use the Triangle button to perform a special attack. They will also be able to select a Multiple Assault attack if their units on the board meet the conditions. Defense also puts the player in the action-RPG mode, this time blocking to reduce the enemy's damage. Successfully blocking attacks will also increase the amount of AP the player's unit has.

There are 50 levels total (45 normal and 5 prologue) and the game should take from around 70-100 hours to complete.

The main protagonist of the game. His father was killed 10 years ago in one of the many ongoing fights between Shinra and Ouma. Reiji is, often described by his partner Xiaomu, "a sullen tight-ass", which prompts Reiji to shoot a jokingly made comeback. While he may not show it, he cares deeply for Xiaomu, even if he shoots down several of her comments, jokes or not. He carries a case containing 2 swords and a shotgun; each of the swords has an element associated with it. He also has a handgun holstered on his waist. He is voiced by Kazuhiko Inoue.

Fellow protagonist as well, Xiaomu is known as a "mystic fox" with an age of 765 years. She was partners in the Shinra organization with Reiji's father, Shougo Arisu, 10 years ago, until his death. Xiaomu often portrays a bit of a flirty nature towards Reiji, though he often ignores it. Aside from poking Reiji's buttons, she can become a little protective of Reiji when the subject of his father's death comes around, or Saya. She wields an ice elemental cane sword styled after a Shakujo staff, as well as a handgun. She is also able to use magic attacks, such as energy rays from her finger, with which she provides most of the duo's ranged attacks. She is voiced by Omi Minami.

Like Xiaomu, Saya is a werefox, however, she is born in Japan and not China. She was involved with the incident that happened with Shougo Arisu and Xiaomu 10 years ago, which is why Xiaomu holds a grudge against her. Opposite to Xiaomu, Saya is with the rival organization of Shinra: Ouma. Saya upholds a rather odd personality-she can never seem to be upset and usually remains calm and overly flirty in contrast to that of her Chinese werefox counterpart. Her pet names for Reiji and Xiaomu are 'boy' and 'little one'. She is voiced by Ai Orikasa.

An enemy sealed in the Abyss of Time 10 years ago; the Ouma Project culminates with its release. It has deep ties with the Arisu clan.

A supposedly made complete clone of Saya, though physical resemblance is questionable. Saya says it is part of the Ouma Project.

This is a list of significant characters that make an appearance in Namco x Capcom. 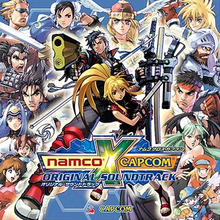 The Namco × Capcom Special Sound Track promotional demo sound track was released on May 5, 2005. It featured a the short version of the theme song and a few character themes that would make their way into the final release. The Namco × Capcom Original Soundtrack (ナムコ クロス カプコン オリジナル・サウンドトラック, Namuko Kurosu Kapukon Orijinaru Saundotorakku?) was released on July 7, 2005 in Japan. Both albums feature work by composer Yuzo Koshiro. The game's theme song Subarashiki Shin Sekai was performed by Flair.