Blade of the Immortal

Blade of the Immortal

Blade of the Immortal (無限の住人, Mugen no Jūnin?, lit. "The Inhabitant of Infinity") is a Japanese manga series by Hiroaki Samura. The series won an Excellence Prize at the 1997 Japan Media Arts Festival[2] and the Will Eisner Comic Industry Award in 2000 for Best U.S. Edition of Foreign Material.[3] The series is set in Japan during the mid-Tokugawa Shogunate period, beginning in the 2nd year of the Tenmei era or 1782.

See also: List of Blade of the Immortal characters

Blade of the Immortal follows the deeds of Manji, a skilled samurai who has a decisive advantage: no wound can kill him, except for a rare poison. In the past, his criminal actions led to the death of 100 other samurai (including his sister's husband). He becomes immortal at the hand of an 800-year-old nun named Yaobikuni, and is compelled by the death of his sister to accept the quest that will end his agelessness. He has vowed to make amends by killing 1000 evil men, and until he does Manji will be kept alive by "sacred bloodworms" (血仙蟲, kessen-chū?), remarkable creatures that allow him to survive nearly any injury and reattach severed limbs even after hours of separation. They work by sacrificing themselves to seal the wound - they're worms that were bred to be as close in their chemical and physical make-up to humans as you can get without being human. They cannot handle regrowth on a large scale, but, for example, can reattach a severed limb or seal a hole in the brain.

Manji crosses paths with a young girl named Asano Rin and promises to help her avenge her parents, who were killed by a cadre of master swordsmen led by Anotsu Kagehisa. Anotsu killed Rin's father and his entire dōjō, making them a family of outcasts. Anotsu's quest is to gather other outcasts and form an extremely powerful new dojo, the Ittō-ryū (a school teaching any technique that wins, no matter how exotic or underhanded), and has started taking over and destroying other dojos.

In addition, another group calling itself the Mugai-ryū has emerged, in opposition to the Ittō-ryū. Its true leadership and motives are initially a mystery, but its methods (any tactics that leads to victory) resemble those of the Ittō-ryū. They try to enlist Manji's help as they seem to want the same thing. Eventually Manji joins but quickly pulls out after he finds out a member, Shira, is way too sadistic for his tastes. After a while Manji finally discovers that the Mugai-ryū work for the government. They are all death row inmates who are allowed to live only if they serve the shogunate . While Manji and Shira quickly grow to hate each other, after Shira runs off, Manji remains on friendly terms with the other members of the group.

In a broader context, the series covers the effects of death and the consequences of not being able to die, as well as the meanings behind living. Most of the principal characters have some sort of purpose which they inexplicably discover through the events that transpire.

These refer to the English editions published by Dark Horse Comics. Blade of the Immortal can be (so far) roughly divided into four main storyarcs:

A fifth (and final) arc ~ Winter War ~ has begun in the Japanese run of the manga.[citation needed] The first volume of this arc has been translated into English and published by Dark Horse comics as "Footsteps" (volume 22).[citation needed] There is no information on how long the final arc will run.

A bloodworm (kessen-chu) is an unexplained little worm-like creature, which lives in the bloodstream and tissue in a symbiotic way. It heals all wounds acquired by its host, replacing the missing tissue and organs with their own bodies as well as reattaching limbs. Many of the "scars" on Manji's body are actually worm flesh, holding Manji together like living sutures. However, it is noted that the bloodworms can only heal wounds acquired during infestation and not ones that were acquired prior (such as Manji's eye). They also do nothing to prevent pain. The only way to kill a bearer of the bloodworms is to use a bloodworm poison, although it has been implied that cutting off their head may suffice if it is not reattached quickly. During his battle with Makie, Manji said the only way to stop him would be to cut off his head. But whether this would kill him or just leave him unable to function is debatable, because in his battle with Eiku Shizuma, Manji cuts off his head after poisoning him with his own sword, and he does not die until after the kessen-satsu (blood worm killer) takes effect. Further adding to the debate were statements in Wizard magazine that Manji could survive a severed head, but it would take at least a year for the blood-worms to regenerate that much tissue. While not yet covered in the English version of Blade of the Immortal, another immortal is partially beheaded (to the point where only a flap of skin is keeping its head attached) only for the wound to heal within a few seconds This essentially confirms that Manji's regenerative abilities would allow him to survive a beheading. The time in which it takes for regeneration varies: Manji can reattach a limb within seconds and can partially recover from a bullet or stab wound to the brain. However the wounds to his head did have a negative effect (incapable of moving his lower body or weaker vision). Apparently, the kessen-chu give immortality to its host and everlasting youth (the host retaining the age he/she had at the time he/she was fed the kessen-chu).

It is unknown how to infect a person with the kessen-chu, but Shizuma indicates it takes a lot more than blood to blood contact with someone who's infected.In later chapters the question how to transfer them becomes a major part of the story.

Weapons in Blade of the Immortal

The weapons found in Blade of the Immortal are largely fictional, most created by Samura, who confesses he has no idea what some of them are supposed to do. Usually, major characters have unique and specialized weapons - hidden crossbows, throwing knives, poisoned blades, and even weapons meant to inflict maximum pain.

Some of Samura's other creations include Giichi's thresher-like throwing blade, known as Kanetsura's Mito-no-Kami ("Guardian of the Three Paths"), which he uses to sever the heads of his enemies, and Anotsu's large Kabutsuchi battle-axe, which was based on an example from Nepal. 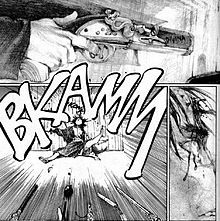 The first "death" of Manji. Blade of the Immortal uses a realistic art style that is unlike most traditional manga.

One of the most striking features of Blade of the Immortal is its beautiful, realistic artwork. Although Samura stylizes and elongates his human figures to some extent, especially early in the run of the manga, he has a thorough knowledge of anatomy that allows him to create uniquely expressive poses and angles. His unusual use of accurately detailed shots of hands and feet makes them almost as reflective of character and mood as his faces. Atmospheric backgrounds and landscapes round out the look of the manga, which incorporates many panels rendered in a finished, shaded pencil style rather than in inked line art. His drawing skills are shown to their best advantage in these penciled panels.

Samura says that he always wanted to be a manga artist. However, unlike most manga artists, he attended art school for a time and has a classical art education. He says in interviews that he disliked the smell of oil paint, and openly admits to hiring another artist to help him get through a required oil painting course.[4] Although he prefers to work in black and white, and does many freelance illustrations in graphite, Samura has painted some color promotional pieces and book covers in acrylics for the collected volumes of Blade of the Immortal, such as the cover for 'Blade of the Immortal #111: Shortcut #5 (of 5)'.[5] Samura never completed his art degree, because he left school before graduation to create Blade of the Immortal for Afternoon.

Editing in the English language adaptation

To preserve the integrity of his art, Samura requested that the publisher of the licensed English translation, Dark Horse Comics, not "flop" the manga (that is, reverse the pages as if in a mirror). At the time the English translation began its publication in individual monthly issues (1996), flopping was an almost universal practice for translated manga. Instead, Blade of the Immortal was modified for Western readers by the unusual method of cutting up the panels and rearranging them on the page in order to have the action flow from left to right.

Although American industry practice has now largely changed over to publishing translated manga in its original right-to-left orientation, Blade of the Immortal has retained the labor-intensive cut-and-paste method. The publisher cautions that rearranging the panels is not foolproof, and can lead to continuity errors; this usually occurs when the flow of text bubbles is dependent upon character placement within panels. In such cases, individual panels or entire pages may be flopped, and occasionally the artwork is modified accordingly; for instance, a retouch artist may draw a scar over Manji's left eye to disguise a flopped panel, though this is not always the case. Sound effects within the panel may also be retouched out and re-lettered in English, or removed completely. Japanese sound effects that are an integral part of the artwork are usually left as is. Additionally, text bubbles or panel borders may be redrawn, and script pacing may be subtly altered in order to preserve suspense or the placement of text bubbles.

In the monthly Dark Horse serialization, colored versions of title pages from the corresponding manga chapter are often featured as cover art, though in some cases a different piece of artwork, such as a tankōbon cover, may be used, usually in cases where the original title page depicts graphic subject matter. The original Japanese tankōbon, which are not subtitled, also collect more chapters than the English volumes published by Dark Horse; as such, they are considerably longer and do not directly correspond to the English numbering scheme. The original tankōbon also contain different cover and interior art, and may contain additional special features, such as character biographies.

Another reason for not "flopping" in the English version is Manji's clothing, which features a Manji, if the pages were "flopped" it would resemble the Swastika used by Nazi Germany, some publishers issued an explanation of this in several issues, particularly in Norway, instead of the Japanese character Manji. Manji is Japanese for "the character for eternality" 萬字, and represents Dharma, universal harmony, and the balance of opposites.

Main article: List of Blade of the Immortal chapters

The original Japanese manga has thus far been collected into 27 volumes (tankōbon) by Kōdansha's Afternoon KC division. The series is still ongoing, and volumes are usually published at the rate of 1 to 2 per year. The English version of the manga is published by Dark Horse Comics. As of October 11, 2007, Dark Horse has dropped the monthly issues for Blade of the Immortal following the completion of the "One Shot" storyarc. The following issues will only be released through trade paperback volumes.

Main article: List of Blade of the Immortal episodes

On 23 March 2008, it was announced that an animated television series adaptation of the manga would be directed by Kōichi Mashimo and produced by Bee Train in summer 2008.[6] The first episode premiered on July 13, 2008 on AT-X channel.[7] The opening theme is "Red Rabbit" (赤いウサギ, Akai Usagi?), performed by The Pillow Book (枕草子, Makura no Sōshi?), and the ending theme is "wants" by GRAPEVINE. American company Media Blasters has acquired the license to the series and plans to release it in September.[8]