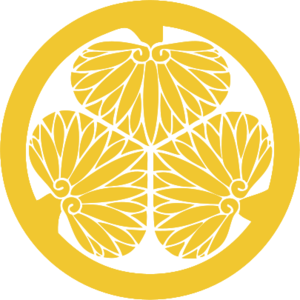 Following the of "warring states", central government had been largely re-established by and during the . After the in 1600, central authority fell to who completed this process and received the title of "" in 1603. In order to become shogun, one traditionally was a descendant of the ancient .

The Tokugawa period, unlike the shogunates before it, was supposedly based on the strict class hierarchy originally established by . The warrior-caste of were at the top, followed by farmers, artisans, and traders. The inflexible nature of the Social stratification system unleashed disruptive forces over time. Taxes on the peasantry were set at fixed amounts which did not account for or other changes in monetary value. As a result, the tax revenues collected by the samurai landowners were worth less and less over time. This often led to numerous confrontations between noble but impoverished samurai and well-to-do peasants, ranging from simple local disturbances to much bigger rebellions. None, however, proved compelling enough to seriously challenge the established order until the arrival of foreign powers.

Toward the end of the 19th century, an alliance of several of the more powerful with the titular Emperor finally succeeded in the overthrow of the shogunate after the , culminating in the . The Tokugawa Shogunate came to an official end in 1868, with the resignation of the 15th Tokugawa Shogun, and the "restoration" ("Ōsei fukko") of imperial rule.

The "bakuhan taisei" ( _ja. 幕藩体制) was the political system in the of . "Baku", or "tent," is an abbreviation of "bakufu", meaning "military government" &mdash; that is, the shogunate. The "han" were the domains headed by daimyo.

Vassals held inherited lands and provided military service and homage to their lords. The Bakuhan Taisei split feudal power between the shogunate in Edo and provincial domains throughout Japan. Provinces had a degree of sovereignty and were allowed an independent administration of the Han in exchange for loyalty to the Shogun, who was responsible for foreign relations and national security. The shogun and lords were both : feudal lords with their own bureaucracies, policies, and territories. The Shogun also administered the most powerful daimyo, the hereditary fief of the House of Tokugawa. Each level of government administered its own system of .

The Shogun had the military power of Japan and was more powerful than the emperor. The emperor was a religious leader and a political leader.

The shogunate had the power to discard, annex and transform domains. The system of alternative residence required each daimyo would reside in alternate years between the han and attendance in Edo. In their absence from Edo it was also required that they leave family as hostages until their return. The huge expenditure sankin-kotai imposed on each han helped centralize aristocratic alliances and ensured loyalty to the Shogun as each representative doubled as a potential hostage.

Tokugawa's descendants further ensured loyalty by maintaining a dogmatic insistence on loyalty to the Shogun. "" daimyo were hereditary vassals of Ieyasu, as well as of his descendants. "", or "outsiders", became vassals of Ieyasu after the battle of Sekigahara. "", or "relatives", were collaterals of Tokugawa Hidetada. Early in the Edo period, the shogunate viewed the tozama as the least likely to be loyal; over time, strategic marriages and the entrenchment of the system made the tozama less likely to rebel. In the end, it was the great tozama of Satsuma, Chōshū and Tosa and to a lesser extent Hizen that brought down the shogunate. These four states are called the Four Western Clans or Satchotohi for short.

The number of han (roughly 250) fluctuated throughout the Edo period. They were ranked by size, which was measured as the number of that the domain produced each year. One koku was the amount of rice necessary to feed one adult male for one year. The minimum number for a daimyo was ten thousand koku; the largest, apart from the shogun, was a million.

Despite the establishment of the shogunate, the emperor in was still the legitimate ruler of Japan. The nihongo|administration|体制|taisei of Japan was a task given by the to the Tokugawa family, which they returned to the court in the .

The shogunate appointed a liaison, the "" ("Shogun's Representative in Kyoto"), to deal with the emperor, court and nobility.

Foreign affairs and trade were monopolized by the shogunate, yielding a huge profit. Foreign trade was also permitted to the Satsuma and the Tsushima domains.

The visits of the ships from were at first the main vector of trade exchanges, followed by the addition of Dutch, English and sometimes Spanish ships.

From 1600 onward, Japan started to participate actively in foreign trade. In 1615, an embassy and trade mission under was sent across the Pacific to (New Spain) on the Japanese-built galleon "San Juan Bautista". Until 1635, the Shogun issued numerous permits for the so-called "" destined for the Asian trade.

After 1635 and the introduction of Seclusion laws, only inbound ships were allowed, from , , and the .

Institutions of the shogunate

The "" ( _ja. 老中) were the senior members of the shogunate. They supervised the ōmetsuke, machibugyō, ongokubugyō and other officials, oversaw relations with the , (members of the nobility), daimyo, Buddhist s and s, and attended to matters like divisions of s. Normally, four or five men held the office, and one was on duty for a month at a time on a rotating basis. They conferred on especially important matters. In the administrative reforms of 1867, the office was eliminated in favor of a bureaucratic system with ministers for the interior, finance, foreign relations, army, and navy.

In principle, the requirements for appointment to the office of rōjū were to be a "fudai" (hereditary) daimyo and to have a fief assessed at 50 000 koku or more. However, there were exceptions to both criteria. Many appointees came from the offices close to the shogun, such as soba yōnin, Kyoto shoshidai, and Osaka jōdai.

Irregularly, the shoguns appointed a rōjū to the position of "" (great elder). The office was limited to members of the Ii, Sakai, Doi, and Hotta clans, but was given the status of tairō as well. Among the most famous was , who was assassinated in 1860 outside the Sakurada Gate of .

The "wakadoshiyori" were next in status below the rōjū. An outgrowth of the early six-man "rokuninshū" (1633&ndash;1649), the office took its name and final form in 1662, but with four members. Their primary responsibility was management of the affairs of the and , the direct vassals of the shogun.

Some shoguns appointed a "soba yōnin". This person acted as a liaison between the shogun and the rōjū. The soba yōnin increased in importance during the time of the fifth shogun Tokugawa Tsunayoshi, when a wakadoshiyori, , assassinated , the tairō. Fearing for his personal safety, Tsunayoshi moved the rōjū to a more distant part of the castle. Some of the most famous soba yōnin were Yanagisawa Yoshiyasu and .

Early in the Edo period, daimyo such as Yagyū Munefuyu held the office. Soon, however, it fell to with rankings of 5000 koku or more. To give them authority in their dealings with daimyo, they were often ranked at 10 000 koku and given the title of "kami" (an ancient title, typically signifying the governor of a province) such as "Bizen-no-kami".

As time progressed, the function of the ōmetsuke evolved into one of passing orders from the shogunate to the daimyo, and of administering to ceremonies within Edo Castle. They also took on additional responsibilities such as supervising religious affairs and controlling firearms.

The metsuke, reporting to the wakadoshiyori, oversaw the affairs of the vassals of the shogun. They were the police force for the thousands of hatamoto and who were concentrated in Edo. Individual han had their own metsuke who similarly policed their samurai.

The "san-" ("three administrators") were the "jisha", "kanjō", and "", which oversaw temples and shrines, accounting, and the cities, respectively. The "jisha bugyō" had the highest status of the three. They oversaw the administration of Buddhist temples ("ji") and Shinto shrines ("sha"), many of which held fiefs. Also, they heard lawsuits from several land holdings outside the eight Kantō provinces. The appointments normally went to daimyo; was an exception, though he later became a daimyo.

The "kanjō bugyō" were next in status. The four holders of this office reported to the "rōjū". They were responsible for the finances of the shogunate.

The "machi bugyō" were the chief city administrators of Edo and other cities. Their roles included mayor, chief of the police (and, later, also of the fire department), and judge in criminal and civil matters not involving samurai. Two (briefly, three) men, normally hatamoto, held the office, and alternated by month.

Three Edo "machi bugyō" have become famous through "" (period films): Ōoka Tadasuke and as heroes, and as a villain.

The "san-bugyō" together sat on a council called the "". In this capacity, they were responsible for administering the "tenryō", supervising the "gundai", the "daikan" and the "kura bugyō", as well as hearing cases involving samurai.

The shogun directly held lands in various parts of Japan. These were known as "bakufu chokkatsuchi"; since the Meiji period, the term "tenryō" has become synonymous. In addition to the territory that Ieyasu held prior to the Battle of Sekigahara, this included lands he gained in that battle and lands gained as a result of the Summer and Winter Sieges of Osaka. By the end of the seventeenth century, the shogun's landholdings had reached four million koku. Such major cities as Nagasaki and Osaka, and mines, including the Sado , also fell into this category.

Rather than appointing a daimyo to head the holdings, the shogunate placed administrators in charge. The titles of these administrators included "gundai", "daikan", and "ongoku bugyō". This last category included the Osaka, Kyoto and machibugyō, and the Nagasaki bugyō. The appointees were .

The "gaikoku bugyō" were administrators appointed between 1858 and 1868. They were charged with overseeing trade and diplomatic relations with foreign countries, and were based in the treaty ports of Nagasaki and Kanagawa (Yokohama).

The Late Tokugawa Shogunate ( _ja. 幕末 "Bakumatsu") is the period between 1853 and 1867 during which Japan ended its called "" and modernized from a shogunate to the Meiji government. It is at the end of the and preceded the Meiji era. The major ideological/political factions during this period were divided into the pro-imperialist "" ( patriots) and the forces, including the elite (newly selected corps) swordsmen. Although these two groups were the most visible powers, many other factions attempted to use the chaos of Bakumatsu to seize personal power.