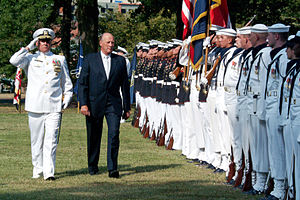 Harald V of Norway, during a Full Honor Ceremony (FHC) on his behalf of his official visit to the United States celebrating 100 years of diplomatic relations between The Kingdom of Norway and the United States of America and to deliver relief supplies to assist in the Hurricane Katrina recovery efforts.

Harald V of Norway and Queen Sonja of Norway, greeted by Laura and George W. Bush at the White House during the March 2005 State Visit to the U.S. 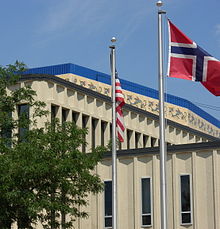 The American Revolution of 1776 had a profound impact on Norway, and the democratic ideals of the U.S. Constitution served as a model for the authors of Norway's own Constitution of 1814. The close relationship between the two nations was reinforced by massive Norwegian emigration to the U.S. during the period 1825–1940, when more than 850,000 Norwegians made new homes in the United States and helped build the nation. During the post-war era, both the Marshall aid and the strong common commitment to NATO have contributed to the powerful bond between the two countries. The friendly state of the bilateral relationship was reinforced when King Harald V of Norway hosted the visit of U.S. President Bill Clinton in November 1999, the first visit to Norway by a U.S. President in Office.

The excellent relations between Norway and the United States, and the Mission in Oslo can focus its efforts on projects that serve mutual interests. Among them are expanding on the success of NATO in securing transatlantic security, promoting new business opportunities between the two nations, working with Russia to preserve the Arctic environment and the Barents Sea, helping the Baltic nations to find their place in the new Europe, and capitalizing on information technology to promote human rights and a sense of world community. 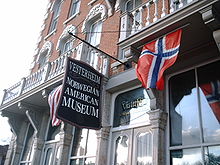 There are more than 4.5 million people of Norwegian ancestry in the United States today.[1] Of these, approximately three million claim "Norwegian" as their sole or primary ancestry.

This article incorporates public domain material from websites or documents of the United States Department of State (Background Notes).[1]