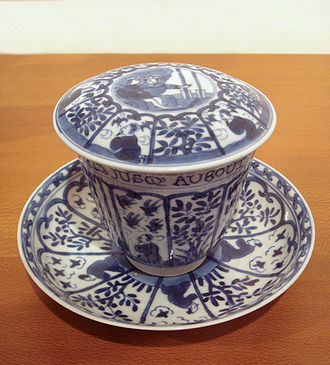 Chinese blue and white export porcelain, with European scene and French inscription "The Empire of virtue is established to the end of the Universe", Kangxi period, 1690-1700.

Chinese export porcelain concerns a wide range of porcelain that was made and decorated in China exclusively for export to Europe and later to North America between the 16th and the 20th century. 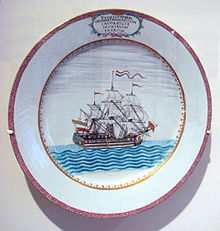 Chinese porcelain plate for a Dutch sea-captain of the ship Vryburg, Canton, 1756

Wares from the 16th century include Kraak porcelain, Yixing stonewares , Blanc-de-Chine, Blue and white porcelain, Famille verte, noire, jaune and rose, Chinese Imari, Armorial wares and Canton porcelain. Chinese export porcelain is generally decorative, but without the symbolic significance of wares produced for the home market. With the exception of the rare Huashi soft paste wares, Chinese porcelain is hard paste made using china clay and Chinese porcelain stone, baidunzi. While rim chips and hairline cracks are common, pieces tend not to stain. Chinese wares are usually thinner than Japanese and do not have the Japanese stilt marks. 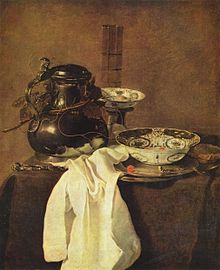 In the 16th century, Portuguese traders began importing late Ming dynasty Blue and white porcelain porcelains to Europe, resulting in the growth of the Kraak porcelain trade (named after the Portuguese ships called carracks in which it was transported). In 1602 and 1604, two Portuguese carracks, the San Yago and Santa Catarina, were captured by the Dutch and their cargos, which included thousands of items of porcelain, were auctioned, igniting a European mania for porcelain. Buyers included the Kings of England and France. Many European nations then established trading companies in the Far East, the most important being the Dutch East India Company or VOC. The trade continued until the mid-17th century when civil wars caused by the fall of the Ming dynasty in 1644 disrupted suppliers and the European traders turned to Japan. 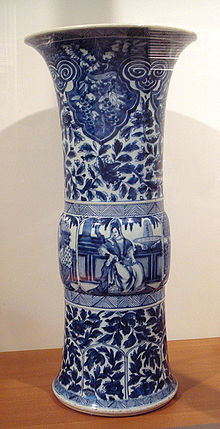 As valuable and highly-prized possessions, pieces of Chinese export porcelain appeared in many seventeenth-century Dutch paintings. The illustration (right) shows a painting by Jan Treck that includes two Kraak-style bowls, probably late Ming, the one in the foreground being of a type called by the Dutch klapmuts. The blue pigment used by the artist has faded badly since the picture was painted.

Under the Kangxi reign (1662–1722) the Chinese porcelain industry at Jingdezhen was reorganised and the export trade was soon flourishing again. Chinese export porcelain from the late 17th century included Blue and white and Famille verte wares (and occasionally Famille noire and jaune). Wares included garnitures of vases, dishes, teawares, ewers, and other useful wares, figure models, animals and birds. Blanc-de-Chine porcelains and Yixing stonewares arrived in Europe giving inspiration to many of the European potters.

For the potters of Jingdezhen the manufacture of porcelain wares for the European export market presented new difficulties. Writing from the city in 1712 the French Jesuit missionary Père François Xavier d'Entrecolles records that "...the porcelain that is sent to Europe is made after new models that are often eccentric and difficult to reproduce; for the least defect they are refused by the merchants, and so they remain in the hands of the potters, who cannot sell them to the Chinese, for they do not like such pieces". 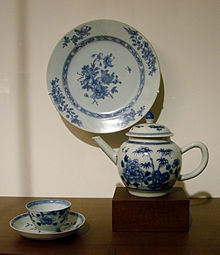 Although European crests on Chinese porcelain can be found as early as the 16th century, around 1700 the demand for Armorial porcelain dramatically increased. Thousands of services were ordered with drawings of individuals' coats of arms being sent out to China to be copied and shipped back to Europe and, from the late 18th century, to North America. Some were lavishly painted in polychrome enamels and gilding, while others, particularly later, might just incorporate a small crest or monogram in blue and white. Chinese potters copied the popular Japanese Imari porcelains. Chinese Imari continued to be made for export into the second half of the 18th century, examples being recovered as part of the Nanking cargo from the wreck of the Geldermalsen. 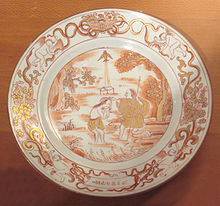 A wide variety of shapes, some of Chinese or Islamic pottery origin, others copying Faience or metalwork were made. Oriental figures included Chinese gods and goddesses such as Guanyin (the goddess of mercy) and Budai (the god of contentment), figures with nodding heads, seated monks and laughing boys as well as figures of Dutch men and women. From the mid-18th century, even copies of Meissen figures such as Tyrolean dancers were made for export to Europe. Birds and animals, including cows, cranes, dogs, eagles, elephants, pheasants, monkeys and puppies, were popular.

From around 1720, the new Famille rose palette was adopted and quickly supplanted the earlier Famille verte porcelains of the Kangxi period. Famille rose enamels for the export market included the Mandarin Palette. Specific patterns such as tobacco leaf and faux tobacco leaf were popular as were, from around 1800, Canton decorated porcelain with its figures and birds, flowers and insects. Many other types of decoration such as encre de chine or Jesuist Wares, made for Christian missionaries, pieces with European subjects like the Judgment of Paris, or Adam and Eve, were made for the European market. 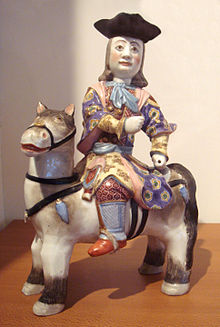 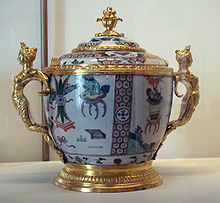 As trade developed, finer quality wares were shipped by private traders who rented space on the Dutch East India Company ships. The bulk export wares of the 18th century were typically teawares and dinner services, often Blue and white decorated with flowers, pine, prunus, bamboo or with pagoda landscapes, a style that inspired the Willow pattern. They were sometimes clobbered (enamelled) in the Netherlands and England to enhance their decorative appeal. By the late 18th century, imports from China were in decline. Tastes were changing and competition from new European factories with mass-production brought about industrialisation took its toll.

Highly decorative Canton porcelain was produced throughout the 19th century but the quality of wares was in decline. By the end of the century, Blue and white wares in the Kangxi style were produced in large quantities and almost every earlier style and type was copied into the 20th century.