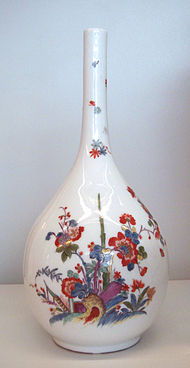 Meisen hard porcelain vase, circa 1730. Indianische Blume ("Flowers of the Indies") in imitation of the Kakiemon style of Arita porcelain, Japan.

Meissen porcelain or Meissen china is the first European hard-paste porcelain that was developed from 1708 by Ehrenfried Walther von Tschirnhaus. After his death that October, Johann Friedrich Böttger, continued his work and brought porcelain to the market. The production of porcelain at Meissen, near Dresden, started in 1710 and attracted artists and artisans to establish one of the most famous porcelain manufacturers, still in business today as Staatliche Porzellan-Manufaktur Meissen GmbH. Its signature logo, the crossed swords, was introduced in 1720 to protect its production; the mark of the crossed swords is one of the oldest trademarks in existence. It dominated the style of European porcelain until 1756.[1]

The Chinese had mastered the production of porcelain long before the west became aware of it, and by the seventeenth century oriental porcelain had become a valuable export commodity in the China trade. Mostly provided by the Dutch East India Company, porcelain from China and Japan represented wealth, importance, and refined taste in Europe, while local attempts to produce porcelain, such as the brief experiment that produced "Medici porcelain" had met with failure.

At the beginning of the eighteenth century Johann Friedrich Böttger pretended he had solved the dream of the alchemists, to produce gold from worthless materials. When King August II of Poland, Elector of Saxony Elector of Saxony Augustus the Strong heard of it, he kept him in protective custody and requested him to produce gold. For years Johann Friedrich Böttger was unsuccessful in this effort. At the same time, Ehrenfried Walther von Tschirnhaus, a mathematician and scientist, experimented with the manufacture of glass, trying to make porcelain as well. Tschirnhaus supervised Böttger and by 1707 Böttger reluctantly started to help in the experiments by Tschirnhaus. When Tschirnhaus suddenly died, the recipe apparently was handed over to Böttger, who within one week announced to the Elector that he could make porcelain. Böttger refined the formula and with some Dutch co-workers, experienced in firing and painting tiles, the stage was set for the manufacturing of porcelain. In 1709, the Elector established the first Meissen manufactory, placed Böttger's laboratory at Albrechtsburg castle in Meissen and production started officially in 1710. 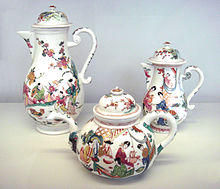 Meissen hard porcelain teapots, circa 1720, decorated with Chinese scenes in the Netherlands, circa 1735.

The first type of porcelain produced by Böttger was a refined and extremely hard red stoneware known in Germany as Böttgersteinzeug. It retained very crisp definition in its mold-cast applied details, on bodies that could be polished to a gloss before firing. Models were derived from Baroque silver shapes and Chinese ceramic examples. Meissen's production of a hard paste white porcelain that could be glazed and painted soon followed, and wares were put on the market in 1713.

Böttger's experimental wares rapidly gained quality but never achieved successful painted and fired decor. The first successful ornaments were gold decorations applied upon the fired body and finely engraved before they received a second firing at a lower temperature. Multicolor enamelled painting was introduced by Johann Gregorius Höroldt in 1723, with an increasingly broad palette of colors that marked the beginning of the classic phase of Meissen porcelain. His enamel paints are still the basis for ceramic paints today. Initially paintings often imitated oriental patterns. The signature underglaze "Meissen Blue" was introduced by Friedrich August Köttig. Soon minutely detailed landscapes and port scenes, animals, flowers, galante courtly scenes and chinoiseries— fanciful Chinese-inspired decorations— were to be found on Meissen porcelain. The Kakiemon vases and tea wares of kilns in Arita, Japan were imitated as Indianische Blume ("Flowers of the Indies"). Paintings by Watteau were copied. Wares were also sold in solid glazed colors, to be enamelled in private workshops (Hausmalerei) and independently retailed. The support of Augustus' patronage attracted to Meissen some of the finest painters and modelers of Europe as staff artists.

The Albrechtsburg was utilized to protect the secrets of the manufacture of the white gold. As a further precaution, very few workers knew the special secret (arcanum) of how to make porcelain, and then perhaps only part of the process. Thus, for a few years, Meissen retained its monopoly on the production of hard-paste porcelain in Europe. By 1717, however, a competing production was set up at Vienna, as Samuel Stöltzel sold the secret recipe, which involved the use of kaolin, also known as china clay. By 1760 about thirty porcelain manufacturers were operating in Europe, most of them, however, producing frit based soft-paste porcelain.

In order to identify the original Meissen products, Meissen developed markings that initially were painted on, but were soon fired in underglaze blue. Early markings such as AR (Augustus Rex, the monogram of the King), K.P.M. (Königliche Porzellan-Manufaktur), M.P.M. (Meissener Porzellan-Manufaktur), and K.P.F. ("Königliche Porzellan-Fabrik) were eventually replaced by the crossed swords logo. Introduced in 1720, it was used consistently after 1731 by official decree. Variations in the "crossed swords" logo allow approximate dating of the wares. 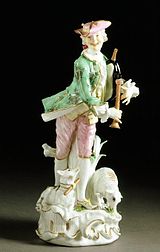 Augustus II charged first Johann Jakob Irminger with the design of new vessels. In 1720 Johann Gregorius Höroldt became the director and introduced brilliant colors which made Meissen porcelain famous. The next sculptor, Johann Jakob Kirchner, was the first to make large-scale statues and figurines, especially of Baroque saints. His assistant was Johann Joachim Kaendler; in 1733 Kirchner resigned, and Kaendler took over as chief "modelmaster". He became the most famous of the Meissen sculptors. Under his direction Meissen produced the series of small figurines, often depicting scenes of gallantry, which brought out the best of the new material. His menagerie of large-scale animals, left in the white, are some of the high points of European porcelain manufacture. His work resulted in the production of exquisite figurines in the rococo style that influenced porcelain making in all of Europe. Supported by assistants like Johann Friedrich Eberlein and Peter Reinecke, he worked until his death in 1775.

In 1756, during the Seven Years' War, Prussian troops occupied Meissen, giving Frederick II of Prussia the opportunity to relocate some of the artisans to establish the Königliche Porzellan Manufaktur Berlin. With the changing tastes of the neoclassical period and the rise of Sèvres porcelain in the 1760s, Meissen had to readjust its production, and in the reorganization from 1763, C.W.E. Dietrich of the Dresden Academy became artistic director and Michel-Victor Acier from France became the modelmaster. The practice of impressing numerals that correspond to moulds in the inventory books began in 1763. Sèvres styles and ventures into Neoclassicism, such as matte bisque wares that had the effect of white marble, marked the manufactory's output under Count Camillo Marcolini, from 1774. 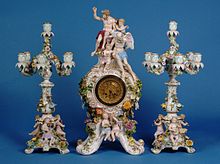 In the nineteenth century Ernst August Leuteritz modernized many of the rococo figurines, and reissued them, creating a "Second Rococo" characterized by lacework details (made from actual lace dipped in slip and fired) and applied flowers; English collectors used the term Dresden porcelain to describe these wares, especially the somewhat simpering and coy figurines.

Under Erich Hösel, who became head of the modelling department in 1903, old styles were revived and reinterpreted. Hösel also restored eighteenth century models. Some appealing work in the Art Nouveau style was produced, but Meissen's mainstay continued to be the constant production of revived eighteenth-century models.

After 1933, the artistic freedom of the artists became restricted by the State of Saxony in accordance with the contemporary indoctrination process in Germany. Some artists (i.e. Ernst Barlach) who had contributed to progressive Meissen during the Weimar period were banned.

After World War II and under Communist rule, the manufactory that had always catered to the rich and wealthy had some difficulty to find its way. The danger was that Meissen would become a factory merely producing for the masses. It was not until 1969, when Karl Petermann became the director, that Meissen went back to focus on its old traditions and was also allowed a freer artistic expression. 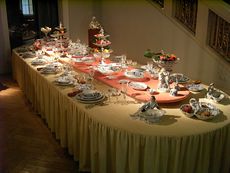 Böttger early foresaw the production of tableware, and the first services were made in the 1720s. Initial services were plain, but Kaendler soon introduced matching decorations. Kaendler also produced the 1745 "New Cutout" pattern, characterized by a wavy edge cut.

The famous Schwanenservice ("Swan Service") was made in 1737-43, for the manufactory's director, Count Heinrich von Brühl; it eventually numbered more than a thousand pieces. At the end of World War II, the pieces of the Swan Service were scattered amongst collectors and museums. Yet, with the moulds still available, the pattern continues to be made today.

The Blue Onion pattern has been in production for close to three centuries. It was basically designed by Höroldt in 1739 and is probably inspired by a Chinese bowl from the Kangxi period. Widely popular, the pattern has been copied extensively by over sixty companies; some of those competitors have even used the word Meissen as a marking. But the pattern became so popular and widespread that the German Supreme Court in 1926 ruled that the term Meissen Zwiebelmuster ("Meissen Onion Pattern") was in the public domain.

A series of "Court Dragon" and "Red Dragon" tableware patterns features Chinese dragons, generally in underglaze red with gilt details flying around the rim of the plate and with a medallion in the center of the cavetto. A version of this pattern was used in Hitler's Kehlsteinhaus retreat.

Other popular patterns still in production include the Purple Rose pattern and the Vine-leaf pattern.

At the beginning the Meissen manufactory was owned by the King of Saxony; by 1830 it came to belong to the State of Saxony. After World War II, most of the equipment was sent to the Soviet Union as part of war reparations. However, already by 1946, the workers using traditional methods and the kilns that had not been dismantled were able to resume production. The company became a Soviet Joint Stock Company in Germany. Almost all of the production was sent to the Soviet Union, a crucial step that kept the artisan community alive. After the establishment of the German Democratic Republic, the company was handed over to German ownership in 1950 and became a people-owned company. Meissen Porzellan turned out to be one of the few profitable companies in the economically troubled East German system, earning much needed foreign currency. After the German reunification in 1990, the company was restored to the State of Saxony which is the sole owner. While its products are expensive, the high quality and artistic value make Meissen porcelain very desirable by collectors and connoisseurs.

The rarity and expense of Meissen porcelain meant that originally it could only be bought by the upper classes. Meissen took orders from the elites of Russia, France, England and other European countries. The European wealthy accumulated vast collections and when a wealthy class emerged in the United States people like the Vanderbilts started their own collections. Many of these collections then found their way into the world's great museums.[2]