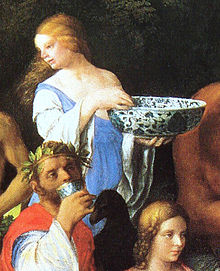 The Feast of the Gods (detail), Giovanni Bellini, 1514 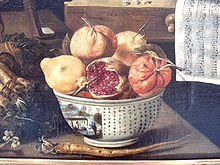 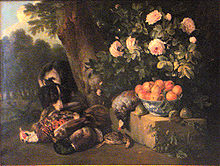 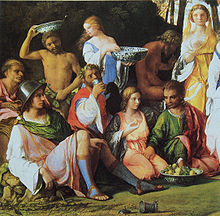 In Italy, the first known depiction of Chinese porcelain bowls is from the The Feast of the Gods by Giovanni Bellini (1514).[1] The style of the bowls is that of the Ming dynasty blue and white porcelain type, maybe examples of which are known to have been exported in Persia, Syria and Egypt.[1] The painting by Bellini was a request by Duke Alfonso I d'Este, who was known for his interest in Chinese porcelain. It seems that Bellini found samples of the Chinese ware not through trade, but among diplomatic gifts received by Venice from the Mamluke Sultans in 1498 (gift to Doge Barbarigo), and in 1498 and 1508 (gift to the Signoria).[1]

Some earlier examples are known though, although it is unclear if they are Chinese or Islamic prototypes, as in the Madonna and Child by Francesco Benaglio (1460–70), or the Adoration of the Magi by Andrea Mantegna (1495–1505).[1]

In the 16th century, numerous other painters would use Chinese porcelain in their paintings, especially Dutch ones. This trend was related to the direct importation of Chinese porcelain to Europe, through what is known as "Carrak" trade, hence the name Kraak porcelain.[2][3]

This artistic trend coinciding with the fashion for Chinese porcelain in Europe in the 17th–18th century, which led to the development of a local porcelain industry initially highly imitative of Chinese wares, as seen in French porcelain.