Mennecy-Villeroy porcelain (or Mennecy porcelain) is a French soft-paste porcelain from the manufactory established under the patronage of Louis-François-Anne de Neufville, duc de Villeroy (1695-1766) and — from 1748 — housed in outbuildings ("les petites maisons") in the park of his château de Villeroy, and in the nearby village of Mennecy (Île-de-France).[1] The duke's DV and D.V. incised or in underglaze blue were used as the factory mark.[2] The elite wares of Mennecy were intended to compete with Chantilly porcelain and other small manufactures, which were joined in 1745 by Vincennes porcelain. Besides table wares, Mennecy-Villeroy specialized in small figures, representing the Seasons, commedia dell'arte characters,[3] and other galanteries. 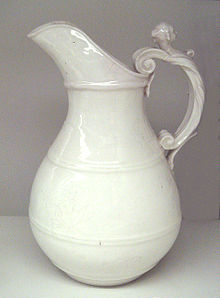 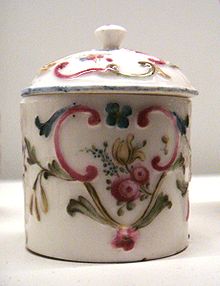 The arcanist in charge was François Barbin (1691-1765[4]), who was already established as a maker of faience under Villeroy's protection when the parish registers commence in 1737. Barbin was identified in an action at law of August 1748 as having already spent fourteen years (i.e. since 1734) as a maker of porcelain in a house in the rue de Charonne, faubourg Saint-Antoine, Paris, where he and his wares had recently been seized and the porcelain sold, as impinging upon the prerogatives of the monopoly for exclusive manufacture of porcelains "in the manner of Saxony" (that is, Meissen porcelain) granted to the manufacture of porcelain at Vincennes; he sought protection away from Paris, with his protector the well-connected duc de Villeroy,[5] combining his porcelain manufacture with the already established faience industry at the château de Villeroy and Mennecy.[6] None of these early "rue de Charennes" porcelains made in 1734-48 have been identified, but a piece of faience at the Musée de Sèvres bears the date 1748 and the mark D.V..[7] 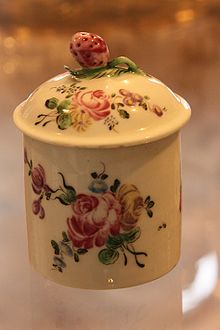 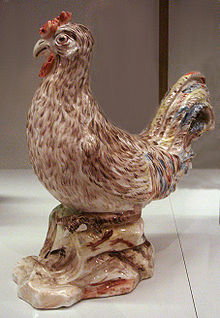 Management of the factory was assumed by Barbin's son, Jean-Baptiste, who bought out his father and his brother-in-law; after the younger Barbin's death shortly after his father, 14 September 1765,[8] the lease was bought from his widow by partners of the porcelain manufactory at Sceaux, the sculptor Charles-Symphorien Jacques and the painter Joseph Jullien, who shifted the factory to Bourg-la-Reine,[9] close to the main market, Paris— where Barbin had not received a permit to construct a kiln in 1748. There they had the protection of Louis-Charles de Bourbon, comte d'Eu.[10]