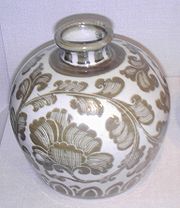 Ding ware (Chinese character: 定瓷; Wade-Giles: Ting; Pinyin: Dìngcí) was produced in the prefecture of Dingzhou, starting from the end of the Tang Dynasty and finishing during the Jin dynasty of northern China.

It is famous for the ivory-white or creamy-white colour of the majority of its products, although it also produced lines in other glazes, using varied techniques. The range and output of the wares was large, producing ceramics of high quality for the wealthy merchant class and the scholar-literati class, as well as tributary ceramics of the highest quality for the imperial court.

Ding ware had already become highly desirable during the Song Dynasty, due to its subtle colour and refined form. It inspired some of the early porcelain of Jingdezhen, and was endlessly copied by this and other kiln complexes, as late as the Ming and Qing dynasties.