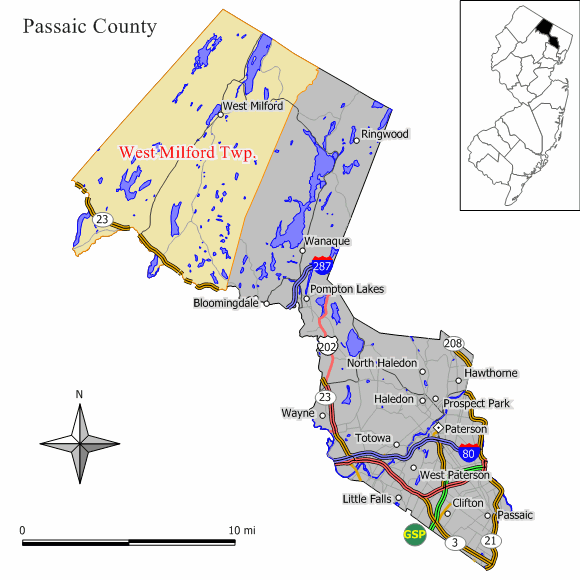 West Milford is a township in Passaic County, , . As of the , the township population was 26,410.

There are old name places in the township like Postville, Utterville, Corterville, Browns, Awosting, Echo Lake, Macopin, Charlotteburg (named after King George III's wife, and the town is now under the Charlotteburg Reservoir), Clinton (or sometimes called Clinton Furnace, now under the Clinton Reservoir, and the furnace still stands), Moe Mountain, Oak Ridge (a nameplace, but town is under the Oak Ridge Reservoir), Newfoundland, Apshawa, New City, and Smith Mills. Newfoundland is divided by the , which divides Passaic and Morris Counties; a small part of Newfoundland lays within Jefferson Township. A large part of the township is reservoir property owned by the City of Newark in Essex County for their water supply. Prior to the Second World War, the township was a resort area with trains coming from New York City to stations at Charlotteburg, Newfoundland, Oak Ridge in the south and Hewitt (also known as Sterling Forest station) and Awosting in the north. Railroad service in the south was from the New Jersey Midland starting around the 1850s and in the north around the 1870s from the Montclair Railroad, out of and later the (before their merger with the Lackawanna Railroad).

is an interstate lake approximately 9 miles long lying in both New Jersey and . It was originally called Long Pond. It was dammed up to increase the size of the lake for water power down stream. During the resort era, several steamboats operated on the lake, the most famous and grand was the two deck steamer, "Montclair". These steamboats met the trains and took passengers to the various resorts around the lake in both states.

There is a seaplane area on Greenwood Lake, a few large marinas and lakeside restaurants with docks. There is a public airport called just south of the lake on top of a mountain ridge and has two landing strips; one is long enough to handle small jets. Plus there is one private airport in the township on a private estate.

After and for the next 20 years the area underwent a major change from a resort area to year round residences. Before there were year-round houses, the summer residence of was West Milford. Road maps of the 1950s showing the population on the backside said 2,000 winter and 10,000 summer, now say 26,485 [Source: Hagstrom Maps] .

West Milford is also the home of "haunted" .

There were 9,190 households out of which 39.9% had children under the age of 18 living with them, 67.3% were married couples living together, 7.8% had a female householder with no husband present, and 21.8% were non-families. 16.7% of all households were made up of individuals and 5.5% had someone living alone who was 65 years of age or older. The average household size was 2.84 and the average family size was 3.23.

Newfoundland is a of West Milford located along the (NYS&W Rwy, formerly NYS&W RR) tracks (freight service only) and Route 23. It is also a mailing address for Green Pond (just north of the in Rockaway Township, Morris County), a private lake community owned by Green Pond Corporation and Lake End Corporation, which lays in Rockaway Township where the divides Passaic County from Morris County.

The 2003 film "" was set, and filmed, largely in Newfoundland. There was an early non-talking movie produced in the township at the Mine Hole in the Hewitt section of the township. A still photo of that movie is published in the township's book entitled "The Day the Earth Shook and the Sky Turned Red", copyright 1984.

For decades, West Milford was rural with only a couple service stations, a couple small eating establishments, and a bank or two. The community was mostly residential. In the mid 1960s a then-average-sized 20,000 square foot A&P Supermarket was built. In 1972, opened up a wildlife theme park called . Initially this brought huge tourist revenue to the township. Jungle Habitat was a mixed blessing due to the amount of summer and weekend traffic into this rural area made up of small two lane roads. Jungle Habitat wanted to expand and become a huge amusement park, but residents concerned with excessive traffic voted this proposal down in 1976, which resulted in an abrupt closing and exit. The wildlife park was subsequently moved to and became home to and Wild Safari. The former site of Jungle Habitat, in recent years has become a location for various Township activities such as the annual Fourth of July Fireworks display.

With the loss of tax revenue and the needs of the residents in mind, the township did approve the addition of more businesses to the township. In the late 1970s, a 45,000 square foot ShopRite supermarket was built, and was expanded in the mid-1980s. Shortly after other businesses joined the area. Near the ShopRite are several restaurants and fast food establishments were built including as well as a four-screen movie theater.In the late 1990s, A & P closed its obsolete store and built a 60,000 square foot supermarket a few miles away from the town center, but next door to their former store.

West Milford businesses are represented by the [http://www.westmilford.com West Milford Chamber of Commerce] , an organization of business men and women that has been in existence since 1949. Its mission is to improve and enhance the business community in West Milford.

The Township of West Milford operates under the Faulkner Act: New Jersey’s Optional Municipal Charter Law, Mayor-Council-Administrator Plan as of , . This plan is described as a "Faulknerized" version of the borough form of government. The Legislature accepted the recommendation of the commission, and added the Mayor-Council-Administrator plan to the Faulkner Act as the fourth optional form of municipal government in 1981.

The voters of West Milford Township adopted the Mayor-Council-Administrator Plan at a Special Election held on , . Under the mayor-council-administrator plan, West Milford is governed by an elected mayor and council, with an appointed municipal administrator. The government consists of a Mayor and a Township Council made up of six council members, with all positions elected at large. A Mayor is elected directly by the voters to a four-year term of office. The Township Council consists of six members elected to serve three-year terms on a staggered basis, with two seats coming up for election each year.

The Township Council’s responsibilities include enacting ordinances and resolutions, establishing policies, preparing the annual budget with the assistance of the Township Administrator and the Treasurer, and levying taxes. Additionally, the council makes appointments to both the policy and decision-making boards and various advisory committees in accordance with general law and Township ordinances and resolutions.

Many problems are currently facing the town. Due to the fact that a majority of the town resides in wetlands, consists of state owned land, or is protected by the , it is near impossible to build or make new roads. Buildings that do get put up require a lengthyperiod of time.

Also, the township of West Milford is responsible for preserving the various bodies of water around town. This water cannot be used by the city as it is protected by the state and used primarily by the city of . West Milford is forced to use its own revenue to fund forthe preservation whilst Newark is paid for the water for usage by . For years, the township has fought the state to no avail at receiving tax benefits and/or payment by the city of Newark.

The serve 4,500 students in Kindergarten through twelfth grade. West Milford has six elementary schools (grades K-6), one middle school (grade 7-8), and one high school (grades 9-12). Further, the district supports a Center for Adult/Community Education. The school system has 361 certified staff members, over 50% of whom have a master's degree or higher.

The old Newfoundland, two-room schoolhouse is now the Village Square Inn Restaurant. The old Hillcrest School is now the township's community center. The few one-room schoolhouses are all gone; the last one was the Hewitt School, destroyed by fire set by vandals (it had been the former church before a new, larger church was built).

Some township athletic accomplishments are listed below:

In 2007, the West Milford 12 Year-Old and 10 Year-Old All-Star teams both won their respective District-2 championships.

--Pony Softball: In 2007, the West Milford 14U Pony softball team won second in the state and advanced to the National Tournament.

***For more about the athletic programs at , please visit the "Athletics" section of that page.

Reflist|2 Peter T. Kraft (1958-) Known as "the guy who fell in the 60+ ft. deep mine shaft and survived." Also has been nominated six times for "The Book of Most Important People in The World" But did not want to be aphiliated with it.