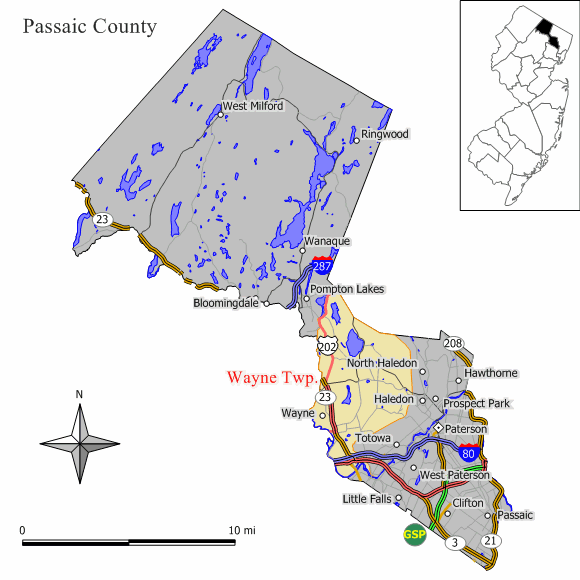 According to the , the township has a total area of 25.2 s (65.2 ), of which, 23.8 square miles (61.7 km²) of it is land and 1.4 square miles (3.5 km²) of it (5.44%) is water. Due to its large geographic area, Wayne shares its borders with 11 neighboring towns. Franklin Lakes and Oakland in Bergen County; Fairfield and North Caldwell in Essex County; Lincoln Park and Pequannock in Morris County; and Haledon, Little Falls, North Haledon, Pompton Lakes, and Totowa in Passaic County.

Wayne has a number of lakes, with distinct communities and neighborhoods located around them. These include Pines Lake, Packanack Lake, Lions Head Lake, Tom's Lake and Pompton Lakes (half of which is in Wayne). The also flows through a portion of Wayne and often floods near Willowbrook Mall and riverside neighborhoods.

In 1694, Arent Schuyler, a young surveyor, miner and land speculator, was sent into north-western to investigate rumors that the French were trying to incite the local Native American population to rebel against the English. Schuyler found no evidence of a rebellion, but discovered a rich fertile valley where the Lenni-Lenape grew a variety of crops. Schuyler reported his findings to the English and then convinced Major Anthony Brockholst, Samuel Bayard, Samuel Berry, Hendrick and David Mandeville, George Ryerson and John Mead to invest in the purchase of the land he referred to as the Pompton Valley. The seven chose Schuyler to be negotiator with the Lenape for the rights to the area. Samual Bayard, however, was chosen to negotiate with the Company which maintained land rights over the area that is now Wayne. Approximately 5,000 acres were purchased on , . The area now known as Wayne Township then became part of New Barbadoes Township in Bergen County.

In 1710, this same area became part of Saddle River Township in Bergen County. By 1837, the residents of Wayne found themselves in Manchester Township in the newly named Passaic County. Finally, on , the first Wayne Township organization meeting was held at the Henry Casey House on the . The first mayor, called the Chairman of the Township Committee until 1962, was William S. Hogencamp. The citizens voted to name the town after General .

Throughout the 18th and 19th Centuries, Wayne Township remained a peaceful farming community. The ran through the southwestern part of Wayne, carrying produce to market and coal from . The canal was replaced by the railroad at the end of the 19th century. In the early 20th century, Wayne grew as a vacation retreat for wealthy ers. In the summer, hordes of people from and came to live in the summer bungalows and enjoy the beautiful rivers.

marked the impetus for tremendous change in Wayne. Summer bungalows were converted to year-round residences to accommodate factory workers. Following the war, farmland was converted to residential living. As Wayne grew, it adopted its current form of government in 1962.

There were 18,755 households out of which 34.4% had children under the age of 18 living with them, 66.4% were married couples living together, 7.6% had a female householder with no husband present, and 23.4% were non-families. 20.2% of all households were made up of individuals and 10.1% had someone living alone who was 65 years of age or older. The average household size was 2.74 and the average family size was 3.19.

Wayne Township is governed under the system of municipal government. A is elected by the voters in partisan elections to serve a four-year term. A nine-member council forms the legislative branch of the township government. Three council members are elected at large and one from each of six wards for a term of four years.

Wayne's mayor is Christopher P. Vergano, appointed at the 2008 Reorganization Meeting to replace Scott Rumana. [ [http://www.waynetownship.com/mayor.htm Township of Wayne: Office of the Mayor] , Township of Wayne. Accessed , .] Members of the Wayne Township Council are:

The Wayne Township Memorial First Aid Squad provides BLS (Basic Life Support) to all to reside in or travel through the Township of Wayne, . The squad operates five Type I Rescue Ambulances, three boats, and one Heavy Rescue Vehicle. The First Aid Squad operates from two buildings known as Uptown and Downtown. The Uptown building, located on Hamburg Turnpike, houses three ambulances, Rescue 976 and one boat. The Downtown building, located between Taylor Drive and PAL Drive, houses two ambulances and two boats. The Squad is run by an elected Chief and several other line officers. The township is divided into two zones (Uptown and Downtown).

The operate 14 public schools in Wayne.

Wayne is criss-crossed by several major roadways, including Interstate 80, , and Route 23.

Wayne is served by the Mountain View and Wayne Route 23 stations, offering service on the to or on Midtown Direct trains (about 16%) to Penn Station in via the . A Wayne-Route 23 station opened in January 2008 which offers train service via the Montclair-Boonton Line and regular bus service into the in .

Some noted current and former residents include:
* (1936-), , , and director best known as in the "M*A*S*H".Kim Alexis (1960-)- moved to Packanack Lake with husband and former Ranger Ron Duguay
*Will Allen (1978-), Starting Defensive Back for the .
*, of "".
* (1962-), -nominated actor.
*Dramarama, the alternative rock band, formed in 1983 in Wayne and achieved success with the song, "Anything, Anything (I’ll Give You)". The band features most of its original members, including frontman and singer/songwriter , and guitarists Mark "Mr. E Boy" Englert and , all of whom graduated from Wayne Hills High School in 1979. [Agnish, Jai. [http://www.montclairtimes.com/page.php?page=10883 "Dramarama"] , "The Montclair Times", , . Accessed , . ""The journey began in Wayne, where Easdale and the original bandmates - Mark “Mr. E Boy” Englert, Peter Wood, and Chris Carter -- grew up. It takes them through the hallways of Wayne Hills High School and rehearsals in the basement of the Sound Exchange record store on Route 23 in Wayne."]
* (1967-), award-winning American and
* (1982-), Running back for the
* (1881-1959), pioneer and director of "The Ten Commandments".
*, CFO of the restaurant chain.
* (1922-), Hall of Fame trainer and manager. [Rowe, John. [http://www.northjersey.com/news/aroundnj/The_life_of_a_legend_in_15_rounds.html "The life of Lou Duva in 15 rounds"] , "", , . Accessed , . "All due respect to Burgess Meredith, but if Sylvester Stallone wanted the most authentic-looking trainer for his "Rocky" movies he should have reached out for the Hall of Fame boxing trainer from Wayne."]
* (1970-), ian and Academy Award-nominated movie and . [ [http://www.gale.com/free_resources/bhm/bio/latifah_q.htm Black History: Biography of Queen Latifah] , accessed , ]
* (1968-), ian and movie actor.
* (1956-), former from the who won fourteen singles titles during his career. At Wayne Valley, he went unbeaten in his two years on the tennis team. [ [http://select.nytimes.com/gst/abstract.html?res=F70E17FE3B5910728DDDAA0994DA405B878BF1D3 "Vilas Extended by Mayer"] , "", , . Accessed , . "Guillermo Vilas, the Argentine left hander, had unexpectedly strong opposition, but ousted young Gene Mayer of Wayne, N.J., 7-6, 7-6, 6-1, in the semifinals of the $50,000 Springfield International, a Grand Prix tennis tournament."]
*Darryl "DMC" McDaniels (1964-), hip hop music pioneer and founding member of the group
* (1982-), Football and for the
*Greg Olsen (1985-), Highly ranked Football prospect, ' 2007 first-round draft pick (31st overall). [ [http://www.chicagobears.com/team/player111.html Greg Olsen profile] , , accessed , .]
* (1979-), Starting Left Guard for the . Has come back from a gruesome leg injury to regain his starting job.Fact|date=December 2007
*Major General , commanding general of the . [Barry, Jan. [http://www.northjersey.com/page.php?qstr=eXJpcnk3ZjczN2Y3dnFlZUVFeXk0NSZmZ2JlbDdmN3ZxZWVFRXl5NzA0OTY1MSZ5cmlyeTdmNzE3Zjd2cWVlRUV5eTM= "Army general from Wayne had key role at Ford funeral"] , "", , . Accessed , . "Swan, who grew up in Wayne, was the military escort for Betty Ford at the funeral ceremonies in California and in the nation's capital, where he is the commander of the Military District of Washington. Swan's widely televised role as Mrs. Ford's escort set off a buzz among former neighbors in the Pines Lake section where he grew up and among Wayne Hills High School classmates."]
* (1980-), Wide Receiver for the and a 2005 Pro Bowl selection
* (1732-1799), Founding Father and the first . He resided in Dey Mansion during the before the area was called Wayne. [ [http://www.passaiccountynj.org/ParksHistorical/Historical_Attractions/deymansion.htm Dey Mansion] , Passaic County, .]

* Wayne is home to '
* Wayne is home to '
* Wayne is home of the 1984 Girls AAU National Cross Country Championship Team (15-16 year old age group).Fact|date=August 2007
* Wayne is the home of the 1970 Champions. [http://www.factmonster.com/ipka/A0113088.html]
* The , a race in the , was named after a race horse from Wayne's Preakness Stables, who won the Dinner-Stakes race at the in Baltimore, , sponsored by the Maryland Jockey Club on , . [ [http://www.waynetownship.com/his-way.htm The History of Wayne Township] , Wayne Township. Accessed , . "Another national celebrity was the Preakness horse. Purchased in 1868 by Milton Holbrook Sandford, owner of the Preakness Stables at the corner of Valley Road and Preakness Avenue, for $4,000. On his maiden start Preakness was entered into the 'Dinner Plate Stakes' at the new Pimlico race Track in Maryland. Preakness won the first race on October 25th, 1870. In 1873 the Maryland Jockey Club started a new racing classic for three year olds and named it "The Preakness" in honor of the first horse to win a race at Pimlico."]
* The band took their name from a lawn ornament store of the same name located in the township on the westbound side of , though no members of the band are from the town. [Tyrangiel, Josh. [http://www.time.com/time/magazine/article/0,9171,1006507,00.html "The Rise Of Mom's Boys"] , "", , . Accessed , . "What drove Fountains of Wayne to Stacy's Mom was the usual soul-killing nightmare of the music industry. Schlesinger and Collingwood, both 36, met as undergraduates at Williams College and soon after started Fountains of Wayne (named after a lawn-ornament store near Schlesinger's New Jersey home), adding bassist Jody Porter and drummer Brian Young along the way."] The series "" also filmed an episode at the same store.
* In a sketch from , the pair says they are opening up a gym in Wayne. [ [http://thetravisty.com/Saturday_Night_Live.php?FN=Hans_and_Franz_featuring_Arnold_Schwarzenegger.wmv Saturday Night Live @ theTravisty ] ]
* Wayne's (07470) is a . This fact was noted on an episode of the television series "".Fact|date=August 2007
* A 74-foot-tall from Wayne was selected as the 2005 Christmas tree. The tree, which weighed in at nine tons and was 42 feet wide, was Rockefeller Center’s 73rd Christmas tree. The Rockefeller Center tree was lit on , , and Wayne's contribution to 's holiday tradition remained lit through , . [ [http://www.wesh.com/news/5442311/detail.html Rockefeller Center Tree Lit During Star-Studded Ceremony] , -TV, , ]
* A scene from the movie "" with , and shows the McMansions across the street from Preakness Hills Country Club on Ratzer Road during its construction stages, as well as a newer housing development off of Alps Road at the corner of Ratzer Road.Fact|date=August 2007
* Wayne is home to the , a DCI Division III World Champion in 2005.
* Wayne is home to the Ice Vault ice rink, where world-class figure skaters such as and train and 1992 Olympic gold medalist coaches. [ [http://www.icevault.com/figureskatingstaff.php Ice Vault Figure Skating Pro Staff: Retrieved June 28, 2008] ] [ [http://www.swissinfo.ch/eng/news_digest/Lambiel_makes_coach_swap_to_raise_stakes.html?siteSect=104&sid=9183262&cKey=1212759918000&ty=nd SwissInfo.Ch: Lambiel Makes Coach Swap to Raise Stakes June 6, 2008] ]