State Highway 3 is one of New Zealand's eight national highways. It serves the west coast of the country's North Island and forms a link between State Highway 1 and State Highway 2. Distances are measured from north to south.

For most of its length SH3 is a two-lane single carriageway, with at-grade intersections and property accesses, both in rural and urban areas. 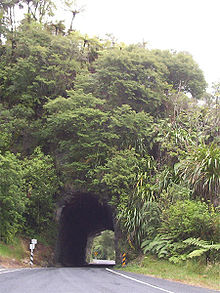 Tunnel at the north end of the Awakino Gorge. There is another short tunnel near the top of Mt Messenger

The highway leaves SH1 at Hamilton, and initially heads south through farmland, passing through Te Awamutu. Sections of this stretch of the road are four-laned, but not divided carriageway. From Otorohanga it follows the valley of the Waipa River to Te Kuiti. The road then turns southwest through sparsely settled farmland, crossing several ridges before following the Awakino gorge to reach the coast, which it follows around the North Taranaki Bight. At the Tongaporutu River the highway turns inland to avoid coastal cliffs and climbs over Mount Messenger before descending via the Mimi River valley to return to the coast near Urenui. Bypassing Waitara, it reaches New Plymouth then turns inland, passing to the east of Mount Taranaki via Inglewood, Stratford and Eltham to Hawera.

From Hawera the highway follows the coast of the South Taranaki Bight southeastwards to Patea and Wanganui before meeting State Highway 1 again at Bulls. Highways 1 and 3 share their route for 6 km as they cross the Rangitikei River to Sanson, where Highway 3 continues southeast towards Palmerston North. After crossing the Manawatu River, the route follows its south bank through the Manawatu Gorge to its terminus and junction with State Highway 2 at Woodville in the Wairarapa.

Both the Awakino and Manawatu gorges are prone to closure by slips and rockslides in heavy rain.

Construction of a bypass of Bell Block, a satellite town of New Plymouth, was completed in 2010.

SH3 has one spur, designated State Highway 3A. This 15.6 km stretch links State Highway 3 just west of Waitara to Inglewood, providing a shortcut and bypass of New Plymouth.