The Defense Threat Reduction Agency (or DTRA) is an agency within the United States Department of Defense and is the official Combat Support Agency for countering weapons of mass destruction (chemical, biological, radiological, nuclear, and high explosives). DTRA's main functions are threat reduction, threat control, combat support, and technology development. The agency is headquartered in Fort Belvoir, Virginia. DTRA employs 2,000 civilian and military personnel at more than 14 locations around the world, including Russia, Kazakhstan, Azerbaijan, Uzbekistan, Georgia, and Ukraine.

DTRA was established in 1998 by consolidating several DoD organizations, including the Defense Special Weapons Agency (successor to the Defense Nuclear Agency) and the On-Site Inspection Agency as a result of the 1997 Defense Reform Initiative.[1]

In 2005, the Secretary of Defense (SECDEF) made the decision to designate the Commander, U.S. Strategic Command (STRATCOM) as the lead Combatant Command (COCOM) for the integration and synchronization of DoD’s Combating WMD (CWMD) efforts in support of U.S. Government objectives. To fill this requirement, the USSTRATCOM Center for Combating Weapons of Mass Destruction (SCC-WMD) was collocated with DTRA.

DTRA's vision is "to make the world safer by reducing the threat of weapons of mass destruction." 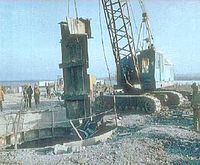 Ukrainian workers use equipment provided by the DTRA to dismantle a Soviet-era missile silo.

After the end of the Cold War, DTRA and its predecessor agencies have implemented the DoD aspects of several treaties that assist former Eastern Bloc countries in the destruction of Soviet era nuclear, biological, and chemical (NBC) weapons sites (such as missile silos and plutonium production facilities) in an attempt to avert potential weapons proliferation in the post-Soviet era as part of the Nunn-Lugar Cooperative Threat Reduction (CTR) program.

DTRA is also responsible for reducing the threat of conventional war, especially in Europe, by participating in various arms control treaties to which the United States is a party, such as the Conventional Forces in Europe treaty and the Treaty on Open Skies.

In 2002, DTRA published a detailed history of its predecessor agencies, Defense’s Nuclear Agency, 1947–1997, which is in the public domain. The first paragraph of the preface makes the following brief statement about the agencies which led up to the formation of DTRA.

"Defense’s Nuclear Agency, 1947–1997, traces the development of the Armed Forces Special Weapons Project (AFSWP), and its descendant government organizations, from its original founding in 1947 to 1997. After the disestablishment of the Manhattan Engineering District (MED) in 1947, AFSWP was formed to provide military training in nuclear weapons’ operations. Over the years, its sequential descendant organizations have been the Defense Atomic Support Agency (DASA) from 1959 to 1971, the Defense Nuclear Agency (DNA) from 1971 to 1996, and the Defense Special Weapons Agency (DSWA) from 1996 to 1998. In 1998, DSWA, the On-Site Inspection Agency, the Defense Technology Security Administration, and selected elements of the Office of Secretary of Defense were combined to form the Defense Threat Reduction Agency (DTRA)."[3]

On January 26, 2006, the director of DTRA was given the extra responsibility of the director of the USSTRATCOM Center for Combating Weapons of Mass Destruction (SCC WMD), a subordinate component to the United States Strategic Command (USSTRATCOM). [4]

'The Shield' is the official magazine of the DTRA SCC-WMD; printed quarterly. [8]