New Mexico State University's teams are called the Aggies, a nickname derived from the university's agricultural beginnings. Since 2005, they have competed in the Western Athletic Conference. The mascot is known as "Pistol Pete". NMSU's colors are crimson and white. The current athletics director is Dr. McKinley Boston (since December 2004).

The "Aggies" nickname derives from the university's agricultural roots and status as a land grant institution. Prior to 2000 the women's intercollegiate athletic teams were known as the Roadrunners, placing NMSU among the handful of NCAA Division I schools which had separate nicknames and mascots for its men's and women's programs. By the late 1990s sentiment began to grow for the university to adopt a single, uniform mascot for all its athletic teams, and during the 1999-2000 academic year the school's female student athletes voted to adopt the "Aggies" moniker. NMSU's women's teams officially became the Aggies at the start of the 2000-2001 academic year.

For many years, NMSU's athletics logo was a caricature of gunfighter Frank "Pistol Pete" Eaton which is identical to the logo used by Oklahoma State. A block "NM STATE" logo was introduced in the late 1990s as a universal logo that could be used for both the Aggie and Roadrunner athletic programs.

The current athletics logo was initially designed in 2005 as part of a controversial plan to remake the university's image on the national stage; Pete's pistol was replaced with a lasso, and his name was briefly officially abbreviated to simply "Pete". In addition to the new logo, the costumed mascot seen at games was also given a new look, losing his six shooters and holster belt in favor of a lasso. The disarming of Pete led to a massive uproar among students, alumni and outsiders demanding the return of Pete's guns. Popular t-shirts worn around campus featured the old Pistol Pete logo modified to show an oversized gun in his hand, with the slogan “Who Brings a Lasso to a Gunfight?” The decision was even criticized by Fox News anchor Bill O'Reilly during his "Most Ridiculous Item of the Day" segment.[3] The most popular nickname given to the widely unpopular new mascot was "Lasso Larry". After one year the university dumped the cartoonish mascot in favor of a real student dressed in more traditional cowboy attire, carrying a holster belt and six shooters, and wearing nothing on his head but a black cowboy hat. The "Pistol Pete" name was also restored. In 2007, NMSU modified the "Lasso Larry" logo to remove the lasso and once again depict Pistol Pete carrying pistols, and this is now the official athletics logo.

The NMSU Aggies have had various conference affiliations, listed below with the year of change: [1] 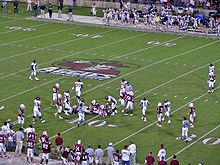 One of many football games played in Aggie Memorial Stadium

The Aggies won the Sun Bowl in 1959 and 1960 under coach Warren B. Woodson and continued to do well until he was let go in 1967. Since then the Aggies have had only 4 winning seasons and 2 conference championships in 1976 and 1978. The 1976 championship was shared with Tulsa.

NMSU usually plays two big rivalry games each year with non-conference opponents New Mexico and UTEP. UTEP is located just 45 miles to the south on I-10. This rivalry is often referred to as The Battle of I-10. UNM is less than 250 miles to the north on I-25. This rivalry was traditionally called The Battle of I-25 until it officially became the Rio Grande Rivalry in 2007 as part of a points system that includes all varsity sports competitions between the two schools.

NMSU's "Aggie Fight Song" is based on a popular turn-of-the-century song titled "Oh Didn't He Ramble." The music and lyrics are similar to songs used by several other universities, most notably Cal ("California Drinking Song") and Ohio State ("I Wanna Go Back to Ohio State"). However, only NMSU uses it as the primary school song. The fight song's lyrics have evoked some controversy in recent years due to the reference to drinking, but a vast majority of students and alumni support preserving the traditional lyrics.

Additionally, during the time that NMSU's women's teams were known as the Roadrunners, an arrangement of the theme song from the Warner Bros. "Road Runner" cartoons was used as the unofficial women's fight song. However, since the adoption of the Aggies nickname by the women's teams, this practice has fallen from use and the "Road Runner" song is no longer used.