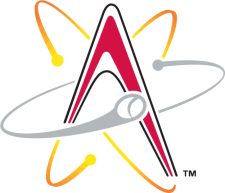 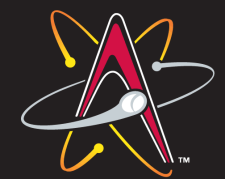 After the Dukes relocated, the city of Albuquerque demolished most of the team's home, , but kept the playing field intact. The city then built a completely new, state-of-the-art stadium around the existing field. The new venue opened in 2003 as . One of the major features of Albuquerque Sports Stadium was its drive-in area, where spectators could sit in their cars past the left-field fence and watch the games. The renovation of the stadium originally included keeping the drive-in area, but Isotopes management decided to close it due to security concerns and has converted it into a play area for children. Isotopes Park also features a hill in center field, similar to the one in the ' stadium, . Since its opening, Isotopes Park has routinely been ranked among the top five minor league ballparks in the nation. Albuquerque fans seem to agree, as the team has set attendance records in the last two years.

The Isotopes' is Orbit, a big fuzzy .

The fictional Springfield Isotopes from the long running TV series "" were the influence for the new name of the team. In the episode "", attempts to thwart the team's plan to move to Albuquerque. Subsequently, when an "" online survey helped the team decide its new name, "Isotopes" received 67 percent of the 120,000 votes. [cite news
title = Doh! Go Isotopes!
work =
publisher =
page = C8
date =
accessdate =2007-06-11]

Though team president Ken Young admitted that the name came from the series, [cite news
first = Dennis
last = Latta
title = Team President Throws Isotopes Name Into Play
work =
publisher = Albuquerque Publishing Company
page = A1
date =
accessdate = 2007-06-11] he said at the name's unveiling, "We picked it because over the past year it has become a popular name, and it does have something to do with Albuquerque." [cite news
first = Steve
last = Oakey
title = To Attract Homer, Isotopes Need to Have Duff on Draft
work =
publisher =
page = D2
date =
accessdate = 2007-06-11] In the three months after the team's name was announced in September 2002, before the team ever took the field, the team sold more merchandise than the Albuquerque Dukes, sold in any single season,

The "Isotopes" name is semi-appropriate, since New Mexico has a number of well-known scientific/military facilities dealing with nuclear technology, such as , , and the Waste Isolation Pilot Project (WIPP), as well as hosting the first s test, the .

In the series "", the character Raphael Ramirez () plays for the Isotopes.