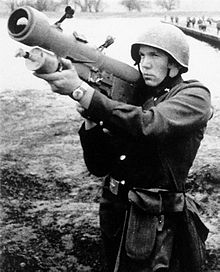 Man-portable air-defense systems (MANPADS or MPADS) are shoulder-launched surface-to-air missiles (SAMs). They are typically guided weapons and are a threat to low-flying aircraft, especially helicopters.

MANPADS were originally developed in the late 1950s to provide military ground forces protection from enemy aircraft. They have received a great deal of attention as potential terrorist weapons that might be used against commercial airliners. These missiles, affordable and widely available through a variety of sources, have been used successfully over the past three decades both in military conflicts, as well as by terrorist organizations.[1]

They can be purchased on the black market anywhere from a few hundred dollars (USD) for older models to upwards of almost a quarter million dollars for newer, more capable models. Twenty-five countries, including the United States, produce man-portable air defense systems.[2][3] Possession, export, and trafficking in such weapons is officially tightly controlled, due to the threat they pose to civil aviation, although such efforts have not always been successful.[4][5]

The missiles are about 5 to 6 feet (180 cm) in length and weigh about 35 to 40 pounds (18 kg), depending on the model. Shoulder-fired SAMs generally have a target detection range of about 6 miles (10 km) and an engagement range of about 4 miles (6 km), so aircraft flying at 20,000 feet (6,100 m) (3.8 miles) or higher are relatively safe.[6] The acronym MANPADS is commonly mistaken to have a singular form of "MANPAD"—this is incorrect, as even a singular unit is still a system and would have the final S in the acronym. 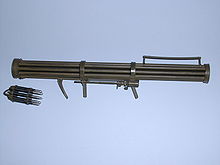 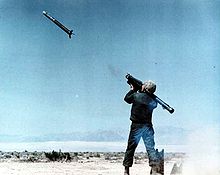 A FIM-43C Redeye missile just after launch, before the sustainer motor ignites.

Mistral in use by French soldiers.

In 1944, Nazi Germany was desperately short of mobile air-defense weapons. Borrowing from the concept of the simple and effective anti-tank Panzerfaust, an unguided multibarreled 20mm rocket launcher, the Fliegerfaust, was developed. The weapon never reached mass production due to the end of World War II.

Infrared shoulder-fired missiles are designed to home-in on a heat source on an aircraft, typically the engine exhaust plume, and detonate a warhead in or near the heat source to disable the aircraft. These missiles use passive guidance, meaning that they do not emit signals to detect a heat source, which makes them difficult to detect by targeted aircraft employing countermeasure systems.[7]

The first missiles deployed in the 1960s were infrared missiles. First generation shoulder-fired SAMs such as the U.S. Redeye, early versions of the Soviet SA-7, and the Chinese HN-5 are considered “tail-chase weapons” as their seekers can only acquire and engage a high performance aircraft after it has passed the missile’s firing position. In this flight profile, the aircraft’s engines are fully exposed to the missile’s seeker and provide a sufficient thermal signature for engagement. First generation IR missiles are also highly susceptible to interfering thermal signatures from background sources, including the sun, which many experts feel makes them somewhat unreliable.[8]

Second generation infrared missiles such as early versions of the U.S. Stinger, the Soviet SA-14, and the Chinese FN-6 use improved coolants to cool the seeker head which enables the seeker to filter out most interfering background IR sources as well as permitting head-on and side engagement profiles. These missiles may also employ technologies to counter decoy flares that might be deployed by targeted aircraft and also have backup target detection modes such as the ultraviolet (UV) mode found on the Stinger missile.[6][8]

Third generation infrared shoulder-fired SAMs such as the French Mistral, the Russian SA-18, and the U.S. Stinger B use single or multiple detectors to produce a quasi-image of the target and also have the ability to recognize and reject flares dispensed from aircraft.[6][8]

Fourth generation missiles such as the U.S. Stinger Block 2, and missiles believed to be under development in Russia, Japan, France, and Israel could incorporate focal plane array guidance systems and other advanced sensor systems which will permit engagement at greater ranges.[9]

Command line-of-sight (CLOS) missiles do not home in on a particular aspect (heat source or radio or radar transmissions) of the targeted aircraft. Instead, the missile operator or gunner visually acquires the target using a magnified optical sight and then uses radio controls to “fly” the missile into the aircraft. One of the benefits of such a missile is that it is virtually immune to flares and other basic countermeasure systems which are designed primarily to defeat IR missiles. The major drawback of CLOS missiles is that they require highly trained and skilled operators. Numerous reports from the Soviet-Afghan War in the 1980s cite Afghan mujahedin as being disappointed with the British-supplied Blowpipe CLOS missile because it was too difficult to learn to use and highly inaccurate, particularly when employed against fast moving jet aircraft.[10] Given these considerations, many experts believe that CLOS missiles are not as ideally suited for untrained personnel use as are IR missiles, which sometimes are referred to as “fire and forget” missiles.[11]

Later versions of CLOS missiles, such as the British Javelin, use a solid state television camera in lieu of the optical tracker to make the gunner's task easier. The Javelin’s manufacturer, Thales Air Defence claims that their missile is virtually impervious to countermeasures.[12] Even more advanced CLOS versions, such as the British Starburst, use a laser data link in lieu of earlier radio guidance links to fly the missile to the target.[13]

Laser guided shoulder-fired SAMs use lasers to guide the missiles to the target. The missile flies along the laser beam and strikes the aircraft where the missile operator or gunner aims the laser. Missiles such as Sweden’s RBS-70 and Britain’s Starstreak can engage aircraft from all angles and only require the operator to continuously track the target using a joystick to keep the laser aim point on the target. Because there are no data links from the ground to the missile, the missile cannot be effectively jammed after it is launched. This technique is known as beam riding. Future laser guided SAMs may require the operator to designate the target only once and not manually keep a continuous laser aimpoint on the aircraft. Even though laser guided missiles require relatively extensive training and skill to operate, many experts consider these missiles particularly menacing due to the missiles’ resistance to most conventional countermeasures in use today.[13][14] 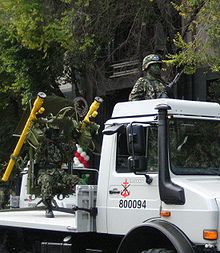 Man-portable air defense systems are a popular black market item for insurgent forces.[21] Their proliferation became the subject of the Wassenaar Arrangement's (WA)22 Elements for Export Controls of MANPADS, the G8 Action Plan of 2 June 2003,[22] the October 2003 Asia-Pacific Economic Cooperation (APEC) Summit, Bangkok Declaration on Partnership for the Future and in July 2003 the Organization for Security and Co-operation in Europe (OSCE), Forum for Security Co-operation, Decision No. 7/03: Man-portable Air Defense Systems.[23]

Understanding the problem in 2003, Colin Powell remarked that there was “no threat more serious to aviation” than the missiles,[24] which can be used to shoot down helicopters and commercial airliners, and are sold illegally for as little as a few hundred dollars. The U.S. has led a global effort to dismantle these weapons, with over 30,000 voluntarily destroyed since 2003, but probably hundreds of thousands are still in the hands of insurgents, especially in Iraq, where they were looted from the military arsenals of the former dictator Saddam Hussein,[25][26] and in Afghanistan as well. In August 2010, a report by the Federation of American Scientists (FAS) confirmed that “only a handful” of illicit MANPADS were recovered from terrorist caches in Iraq in 2009, according to media reports and interviews with military sources.[27]

With the growing number of MANPADS attacks on civilian airliners, a number of different countermeasure systems have been developed specifically to protect aircraft against the missiles. 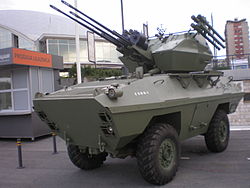 Portions of this article were taken from Homeland Security: Protecting Airliners from Terrorist Missiles, CRS Report for Congress RL31741, February 16, 2006 by the Congressional Research Service, division of The Library of Congress which as a work of the Federal Government exists in the public domain.