The Curtiss Models F made up a family of early flying boats developed in the United States in the years leading up to World War I. Widely produced, Model Fs saw service with the United States Navy under the designations C-2 through C-5, later reclassified to AB-2 through AB-5. Several examples were exported to Russia, and the type was built under licence in Italy. 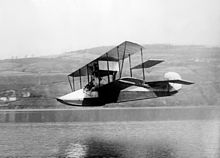 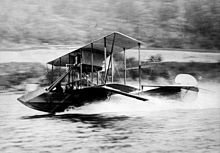 In configuration, these were biplane flying boats powered by a single engine mounted amongst the interplane struts and driving a pusher propeller. The pilot and a single passenger sat side-by-side in an open cockpit. The wing cellule was derived from the Model E landplane and was of two-bay, unstaggered, equal-span construction with large ailerons mounted on the interplane struts and extending past the span of the wings themselves. The earliest examples of this design were built and sold by Curtiss in 1912 without any designation applied to them; the Model F name only coming into use the following year. Confusingly, Curtiss also used the designation Model E to refer to some early machines in this family, although these were quite distinct from Curtiss landplanes that bore this same designation and all but identical to the Model Fs.

Model Fs built from 1918 featured a revised, unequal-span wing that incorporated the ailerons into the upper wing and sponsons on the sides of the hull to improve the aircraft's handling in water. These were known as the Model MF (for Modernised-F), and years later as the Seagull in the post-war civil market.

The US Navy initially purchased four of these aircraft in addition to the Freak Boat (C-1/AB-1) that it had already obtained and which was retrofitted to approximately the same design as the others. One of these, the C-2 became the first aircraft to fly under automatic control on 30 August 1913 when fitted with a gyroscopic stabiliser designed by Elmer Sperry. The same aircraft (by now redesignated AB-2) then became the first aircraft to be launched by catapult from a warship while underway when it took off from USS North Carolina on 5 November 1915. Her sister, AB-3, became the first US heavier-than-air aircraft to see military action when launched from USS Birmingham on 25 April 1914 on a scouting mission over Veracruz during the United States Occupation of Veracruz.

The US Navy bought another eight aircraft before the end of 1916, but orders in quantity only came following the type's selection as the Navy's standard flying-boat trainer in April 1917. An initial batch of 144 of the basic F model were ordered, followed by 22 MFs in 1918. Another 80 MFs were produced under license by the Naval Aircraft Factory. A small number of Model Es and Fs were also purchased by the US Army.

The Russian Navy purchased two batches of Model Fs in 1913-14 and operated them as part of the Black Sea and Baltic Sea fleets until replaced by the Model K shortly thereafter. In Italy, the Curtiss representative Enea Bossi secured rights for local licence-production of the Type F by the Zari brothers, who built eight examples at their workshop in Bovisa, Milan. The first of these was demonstrated to the Italian Navy on Lake Como on 22 September 1914. The Model F was adopted by Regia Marina on the battleship Dante Alighieri, cruisers Amalfi and San Marco, and seaplane tender Elba.[1]

Rogers Airlines operated a postwar fleet of 10 Curitss Seagulls as late as 1927. The aircraft flew routes out of Miami and Nassau in the winter months and returned to upstate New York for maintenance and barnstorming in the summer.[2]