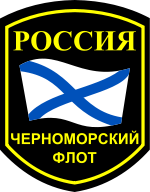 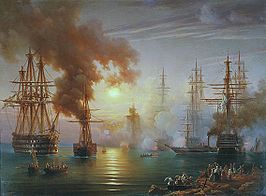 Black Sea Fleet after the Battle of Sinop in 1853

The Black Sea Fleet is considered to have been founded by Prince Potemkin on May 13, 1783, together with its principal base, the city of Sevastopol. Formerly commanded by such legendary admirals as Dmitriy Senyavin and Pavel Nakhimov, it is a fleet of enormous historical and political importance for Russia. In 1790, Russian naval forces under the command of Admiral Fyodor Ushakov defeated the Turkish fleet at the Battle of Kerch Strait.[1]

From 1841 onward, the fleet was confined to the Black Sea by the London Straits Convention.

As a result of the Crimean War, one provision of the Treaty of Paris was that the Black Sea was to be a demilitarized zone like the Island of Åland in the Baltic Sea, although Russia subsequently renounced the treaty and reconstituted its naval strength and fortifications in the Black Sea.

The crew of the battleship Potemkin revolted in 1905 soon after the Navy's defeat in the Russo-Japanese War. Lenin wrote that the Potemkin uprising had had a huge importance in terms of being the first attempt at creating the nucleus of a revolutionary army.

During World War I, there were a number of encounters between the Russian and Ottoman navies in the Black Sea. The Ottomans initially had the advantage due to their having under command the German battleship SMS Goeben, but after the two modern Russian dreadnoughts Imperatritsa Mariya and Imperatritsa Ekaterina Velikaya had been built in Nikolayev, the Russians took command of the sea until the Russian government collapsed in November 1917. German submarines of the Constantinople Flotilla and Turkish light forces would continue to raid and harass Russian shipping until the war's end.

During the Russian Civil War, the vast majority of the Black Sea Fleet was scuttled or interned by the Western Allies (see Wrangel's fleet). A few ships were salvaged in the 1920s and a large scale new construction programme began in the 1930s.

The Fleet was commanded by Vice Admiral F.S. Oktyabrskiy on the outbreak of war with Germany in June 1941. The Fleet gave a credible account of itself, along with the Red Army forces that fought alongside it, during the Siege of Odessa and the Battle of Sevastopol.[2] (See Black Sea Campaigns (1941–44) for more details.)

In the later post-war period, along with the Northern Fleet, the Black Sea Fleet provided ships for the 5th Operational Squadron (ru:5-я Средиземноморская эскадра кораблей ВМФ) in the Mediterranean, which confronted the United States Navy during the Arab-Israeli wars, notably during the Yom Kippur War in 1973.[3]

However, its military importance has degraded since the collapse of the Soviet Union, due to significant funding cuts and, to a degree, the loss of its major missions.

Earlier, Turkey's decision to join NATO (putting the Bosporus Strait under Western control) and the invention of long-range nuclear weapons had dramatically decreased the strategic value of any naval activity in the Black Sea. The fleet has been free of nuclear weapons since the early 1990s.

However, recent local conflicts in the Caucasus region (particularly in Georgia), which obliged Moscow to mobilise the Black Sea Fleet off the coast of Georgia, and the development of oil transit in the region are forcing Russia to support the fleet as much as possible.[citation needed] 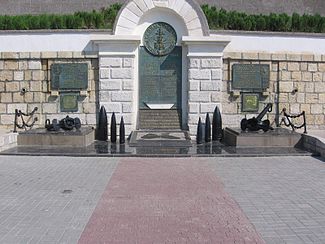 Monument to Heroes of the Soviet Black Sea Fleet Squadron 1941–1944 in Sevastopol, featuring the list of 28 military ships that distinguished themselves in battles with Nazi invaders

In 1992, the major part of the personnel, armaments and coastal facilities of the Fleet fell under formal jurisdiction of the newly independent Ukraine as they were situated on Ukrainian territory. Later, the Ukrainian government ordered the establishment of its own Ukrainian Navy based on the Black Sea Fleet; several ships and ground formations declared themselves Ukrainian.

However, this immediately led to conflicts with the majority of officers who appeared to be loyal to Russia. Simultaneously, pro-Russian separatist groups became active in the local politics of Ukraine's Autonomous Republic of Crimea and the Sevastopol municipality where the major naval bases were situated, and started coordinating their efforts with pro-Moscow seamen.

Joint Fleet and its partition

To ease the tensions, the two governments signed an interim treaty, establishing a joint Russo-Ukrainian Black Sea Fleet under bilateral command (and Soviet Navy flag) until a full-scale partition agreement could be reached. Formally, the Fleet's Commander was to be appointed by a joint order of the two countries' Presidents. However, Russia still dominated the Fleet unofficially, and a Russian admiral was appointed as Commander; the majority of the fleet personnel adopted Russian citizenship. Minor tensions between the Fleet and the new Ukrainian Navy (such as electricity cut-offs and sailors' street-fighting) continued. 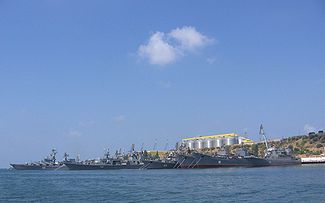 Some major ships (including the flagship) of the Soviet and Russian Black Sea Fleet in Sevastopol, August 2007

In 1997, Russia and Ukraine signed the Partition Treaty, establishing two independent national fleets and dividing armaments and bases between them.[4] Ukraine also agreed to lease major parts of its new bases to the Russian Black Sea Fleet until 2017. However, the treaty appeared to be far from perfect: permanent tensions on the lease details (including often reported issue of lighthouses) control continued. The Fleet's main base is still situated in the Crimean port city of Sevastopol. However, the Yushchenko Ukrainian government declared that the lease will not be extended and that the fleet will have to leave Sevastopol by 2017.[5]

Georgia in the Fleet partition

The newly independent nation of Georgia, which also hosted several bases of the Soviet Black Sea Fleet when it was the Georgian SSR, also claimed a share of the Fleet, including 32 naval vessels formerly stationed at Georgia's Black Sea port of Poti. Not a CIS member at that time, Georgia was not, however, included in the initial negotiations in January 1992. Additionally, some low-importance bases situated in the Russian-backed breakaway autonomy of Abkhazia soon escaped any Georgian control. In 1996, Georgia resumed its demands, and the Russian refusal to allot Georgia a portion of the ex-Soviet navy became another bone of contention in the progressively deteriorating Georgian-Russian relations. This time, Ukraine endorsed Tbilisi's claims, turning over several patrol boats to the Georgian Navy and starting to train Georgian crews, but was unable to include in the final fleet deal a transfer of the formerly Poti-based vessels to Georgia.[6] Later, the rest of the Georgian share was decided to be ceded to Russia in return for diminution of debt.

Since the 2008 South Ossetia war Russian military officials refused to let the Black Sea Fleet take part in any joint naval exercises involving Georgian warships.[7] However, such a statement has little meaning since the Georgian Navy has ceased to exist (early 2009 it was merged with the Georgian coast guard).[8]

Russia is technically a member of the Black Sea Naval Co-operation Task Group.

Russia mobilised part of the fleet during the 2008 Georgian conflict. Russian units operating off Georgia's separatist Abkhazia region resulted in a reported skirmish with the Georgian Navy unconfirmed by Georgia. As a result, Ukraine's President Viktor Yushchenko announced that the Black Sea Fleet would henceforth need permission to cross the Ukrainian border to enter and leave to Sevastopol, to which a Russian admiral retorted that the President of the Russian Federation and not Ukraine commands the Black Sea Fleet.[citation needed] Yushchenko's announcement was without force and deployed units of the Russian Black Sea Fleet returned to their home moorings without incident.

As a consequence of Ukraine's Yushchenko government announcing that the lease of Russian naval bases on the Crimea will not be extended beyond 2017,[9][10] the Russian Black Fleet initiated the expansion of its base in Novorossiysk. In July 2007, the Navy Commander announced that the new base will be ready in 2012.[11] Under the 1997 bilateral treaty, Russia paid $98 million annually and the treaty provided for an extension by mutual agreement. Russian officials have repeatedly said they would like to extend the lease.[12][13][14]

In October–November 2009, the (Russian) Black Sea Fleet complained about inspection of (non-boat) transport vehicles owned by the fleet by the Sevastopol State Auto Inspectorate and Ukrainian security officers, calling them "disrespect for the status of the Russian military units and an unfriendly step aimed at worsening the Russian-Ukrainian relations".[17][18]

On April 21, 2010, Ukrainian President Yanukovych and Russian President Medvedev reached an agreement whereby the Russian lease on naval facilities in Crimea would be extended beyond 2017 by 25 years with an additional 5 year renewal option (to 2042–47) in exchange for a multiyear discounted contract to provide Ukraine with Russian natural gas.[19][20] This deal is controversial in Ukraine.[21][22][23][24][25]

Joint exercises of the Ukrainian Navy and the (Russian) Black Sea Fleet may be resumed after a seven-year interval in June 2010.[26]

In 2010, Russian military counterintelligence officers from the Russian Federal Security Service will return to the (Russian) Black Sea Fleet base.[27]

While a Yushchenko administration minister said that Russia cannot unilaterally replace its Black Sea Fleet ships without Ukraine's consent,[28] the recent lease extension also revalidated the agreements of 1997. Those agreements stipulate that the Russian Black Sea Fleet can maintain the same numbers and types of ships that it had based in Sevastopol as a result of the 1997 fleet division without approval by Ukraine. This stipulation permits Russia to increase the current current size of the fleet which has fallen below those numbers.[29]

Additions of ships to the Fleet

Repeated and sometimes contradictory announcements have been made claiming that new ships will join the fleet. On December 3, 2009, First Vice Mayor of Sevastopol Vladimir Kazarin stated that Russia's Black Sea Fleet could lose its combat capability, given a small number of ships and the absence of new ones.[30] Similar doubts has given by the Russian media. The Gazeta newspaper notes that by 2015 the majority of the warships would no longer be fit for duty.[31]

Russian Navy sources say that up to four frigates and four diesel-electric submarines will be added to the Black Sea Fleet by 2015.[32] Reportedly the lead ship of the Admiral Sergey Gorshkov class frigate class and the fourth Lada class submarine are planned to join the fleet.[citation needed] These vessels will partially replace the reported decommissioning of Kerch, Ochakov, several large support ships, and a diesel-electric submarine.

In June 2010, Russian Navy Commander-in-Chief Admiral Vladimir Vysotsky announced that Russia was reviewing plans for the naval modernization of the Black sea fleet. The plans include 15 new warships and submarines by 2020.[33][34]

Sources from Russian Navy HQ have said that by 2020 six frigates of Project 22350 Gorshkov-class, six submarines of Project 677 Lada class, two large landing ships of Project 11711 Ivan Gren-class and four unspecified ships of another project will be delivered. Due to the obsolescence of Beriev Be-12 by 2015 they will be replaced with Il-38s. Su-24M are planned be upgraded to Su-24M2 at the same time.[35][36][37]

The Project 636.3 (Kilo-class) diesel-electric submarine Novorossiysk — the first of three such new submarines — laid down at Admiralty Wharves Shipyard, St. Petersburg, on August 20, 2010 is destined to serve in the Black Sea Fleet.[38] Navy sources also say that Project 11356 Grigorovich class frigate will be despatched to the Black Sea. [39] Admiral Grigorovich, the lead ship of project, was laid down on December 18, 2010 and is expected to be in service 34 months from that date (Oct 2013). Three ships of this class are to be in service in the Black Sea Fleet before 2015.[40]

The Russian Black Sea Fleet's use of leased facilities in Sevastopol and the Crimea has been controversial. A number of incidents involving official and unofficial Ukrainian individuals and groups have taken place: