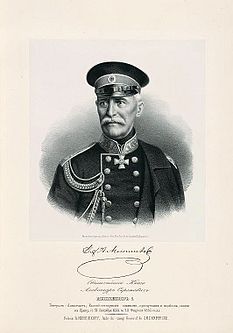 Prince Aleksandr Sergeyevich Menschikov (Александр Сергеевич Меншиков in Russian) (August 26, 1787 – May 1, 1869, all n.s.) was a Finnish-Russian military commander and statesman, of high nobility. He was made adjutant general in 1817 and admiral in 1833.

A great-grandson of Aleksandr Danilovich Menshikov, Duke of Ingria, and a cognatic descendant of the Princely House of Galitzine (another of his great-grandfathers was Prince Michael Golitsyn, the esteemed and humane military governor of Åbo during Russian occupation in the Great Northern War), see details of four generations of his ancestry,[1] Aleksandr entered the Russian service as attaché to the embassy at Vienna in 1809. He became close with Alexander I and accompanied the emperor throughout his campaigns against Napoleon. In 1817, Menshikov was appointed acting General Quartermeister of the General Staff. In 1823, he was transferred to the ministry of foreign affairs. Menshikov retired from army service in 1824.

He then was appointed head of the Naval Headquarters and cabinet minister by Nicholas I. He distinguished himself at the Siege of Varna and in 1830 became a member of the State Council. In 1831, Menshikov held the post of Governor-General of Finland. He mainly devoted himself to naval matters and exerted very bad influence on the development of the Russian Navy, stalling its technical progress and combat training.

In 1853, Menshikov was sent on a special mission to Constantinople, and when the Crimean War broke out he was appointed commander-in-chief by land and sea. He commanded the Russian army at the Alma and Inkerman and showed incompetence and lack of military talent. On February 15, 1855, Menshikov was removed from command, and replaced by Prince Mikhail Dmitrievich Gorchakov. Between December 1855 and April 1856, he held the post of Governor General of Kronstadt and then retired. He died in St. Petersburg.

He was created Prince (Fuerst) in the Finnish nobility, being the only person of the rank of prince to be registered in the Finnish House of Nobility.

The first Finnish steamship Furst Menschikoff was named after him.