The Galitzines[1] (Russian: Голи́цын, tr. Golitsyn, IPA: [ɡɐˈlʲit͡sɨn]) are one of the largest and noblest princely houses of Russia. Since the extinction of the Korecki family in the 17th century, the Golitsyns have claimed dynastic seniority in the House of Gediminas. Its most notable members were Vasily Vasilyevich Galitzine, Boris Alexeyevich Galitzine and Dmitry Mikhaylovich Galitzine.

The family descends from a Lithuanian prince George, son of Patrikas and grandson of Narimantas. He emigrated to the court of Vasily I and married his sister. His children and grandchildren, such as Vassian Patrikeyev, were considered premier Russian boyars. One of them, Prince Mikhail Bulgakov, was nicknamed Galitsa for an iron glove he wore in the Battle of Orsha (1514). His great grandson Prince Vasily Golitsyn (+1619) was active during the Time of Troubles and went as an ambassador to Poland to offer the Russian crown to Prince Władysław. 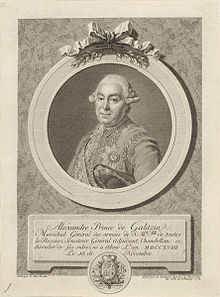 Dmitry's brother Mikhail (c.1674–1730) was a celebrated heroical soldier, 'prince valiant', who is best known for his governorship of Finland (1714–1721), where his magnanimous rule was remembered as noble and exemplary by the people he had conquered as the Greater Wrath (Swedish: Stora ofreden). General field marshal.

His younger brother, another Mikhail Mikhaylovich Golitsyn (1684–1764) was general admiral of the Russian fleet (1756)

And Mikhail's son Alexander Mikhaylovich (1718–1783) was a diplomat and soldier, who likewise rose to be field-marshal and governor of St. Petersburg.

Another son of Mikhail's, Dmitry Mikhaylovich (1721–1793), was the Russian ambassador in Vienna during the reign of Catherine the Great. Primarily remembered for the splendid Galitzine Hospital he opened in Moscow, he should also be noted as a great friend and patron of Mozart.

Prince Dmitry Alekseyevech Golitsyn (1738 - 1803) was the Russian ambassador to Netherlands and a Fellow of the Royal Society.

A son of Dmitry Alekseyevich, prince Dmitry Dmitriyevich Golitsyn (1770–1840), also known as the Apostle of the Alleghanies, was the first Roman Catholic priest ordained in America; a settlement in Pennsylvania is named after him. He is currently under investigation for possible Sainthood, his current title is Servant of God. 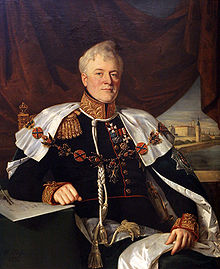 Prince Dmitri Vladimirovich Golitsyn (1771–1844) fought bravely during the Napoleonic wars, was promoted to the rank of Lieutenant General and governed Moscow for 25 years.

Prince Alexander Nikolayevich (1773–1844) was a reactionary minister of education in the government of Alexander I. He headed an investigation into masonic involvement in the Decembrist uprising of 1825 and served as the Chairman of the State Council from 1838 to 1841.

Prince Lev Sergeyevich (June 24, 1845 - January 8, 1916 (June 12, 1845 - December 26, 1915, Old Style)) was one of the founders of wine-making in Crimea. In his Crimean estate of Novyi Svet he built the first Russian factory of champagne wines. In 1889 the production of this winery won the Gold Medal at the Paris exhibition in the nomination for sparkling wines. He became the surveyor of imperial vineyards at Abrau-Dyurso in 1891.

Prince Boris Borisovich (1862–1916) was a prominent physicist who invented the first electromagnetic seismograph in 1906.

Prince Nikolay Dmitriyevich Golitsyn (1850–1925) was the last Tsarist prime minister of Russia, at the time of the February Revolution.

Sergei Golitsyn (1909–1989) wrote Memoirs of a Survivor: The Golitsyn Family in Stalin's Russia, a memoir of his experiences of the period from the start of the Revolution in 1917 to Russia's entry into World War II in 1941.

Prince Yuri Galitzine Born Yokoharma Japan 1919 One of the founders of public relations having written the hand book on the subject and pushed research on the family forward to being published in a book. He was also a member of The Right Society and yet championed action against concentration camps after being the first allied officer to witness one firsthand (Natzweiler)[3]

Prince Georgy Sergeyevich Golitsyn (born 1935) is a Russian physicist noted for his research on the concept of nuclear winter.

Prince Leo Galitzine. Escaped from Soviet Russia during World War I, came to settle in Canada by 1932 when he was active in the mineral rush to Great Bear Lake, Northwest Territories, the site of a silver and radium boom town. Galitzine, together with his wife Princess, bought an airplane and started a charter company at Great Bear Lake. By 1933, Galitzine was living in Edmonton, Alberta.

Prince George Golitzin was the associate producer for Pollyanna and Parent Trap. His brother, Prince Alexander Golitzen was art director for hundreds of movies. He also built the sets for many an award ceremony.

The 18th-century view of the Galitzine Hospital in Moscow

Michael Riley Galitzen, also known as Mickey Riley (September 6, 1909, Los Angeles, California – June 6, 1959, Hollywood, California) was an American diver who won four total medals, one gold, at the 1928 Summer Olympics and 1932 Summer Olympics. Galitzen was a native of southern California, and won acclaim both for his individual diving and as a tandem diver with his brother John. He won two medals in diving at Amsterdam in 1928 as Michael Galitzen. In 1931, he began calling himself Mickey Riley, and won gold and silver medals in Los Angeles in 1932 under that name. After the Olympics, he worked as a film editor, and he and John appeared frequently in diving shows. He was found dead in his Hollywood apartment in 1959; the death was attributed to natural causes. Galitzen was inducted into the International Swimming Hall of Fame in 1977.

Alexander Golitzen, (Moscow, February 28, 1908 – San Diego, July 26, 2005) oversaw art direction on more than 300 movies. Prince Alexander Golitzen was born in Moscow, but fled the country with his family during the Russian Revolution. Travelling via Siberia and China, they arrived in Seattle, where Alexander graduated from high school. He then attended the University of Washington, where he achieved a degree in architecture. He started his art direction career in Los Angeles, as an assistant to Alexander Toluboff, an art director for MGM. He started working with Walter Wanger (a producer) in 1939 and they worked together for many movies. Starting in 1942, and continuing for the next 30 years, he became a unit art director, and later a supervising art director at Universal, overseeing dozens of productions. Alexander Golitzen earned an Academy Award nomination for Foreign Correspondent (1940), and received three Oscars for Phantom of the Opera in 1943, Spartacus in 1960 and To Kill a Mockingbird in 1962. He was also nominated for an Academy Award for his work on Sundown (1941), Arabian Nights (1942), The Climax (1944), Flower Drum Song (1961), That Touch of Mink (1962), Gambit (1966), Thoroughly Modern Millie (1967), Sweet Charity (1969), Airport (1970), and Earthquake (1974). He served on the Academy's board of directors for several years. Alexander was married for 72 years to Frances, who survived him. They had a daughter Cynthia, a son Peter, five grandchildren and a great-granddaughter.