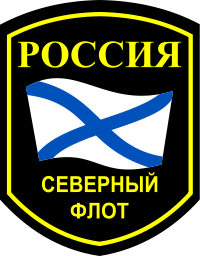 The Red Banner Northern Fleet (Russian: Северный флот, Severnyy Flot) is a unit of the Russian Navy that has access to the Barents and Norwegian Seas, the Arctic and Atlantic Oceans, and is responsible for the defense of northwestern Russia.[1] It was established in 1937 as part of the Soviet Navy. The fleet's headquarters, including its main base and administrative centre, is in Severomorsk; secondary bases are located throughout the Kola Gulf. During the Soviet Era it operated more than 200 submarines ranging from diesel-electric attack (SS) to nuclear-powered ballistic missile (SSBN) classes.

On June 19, 1916, the Russian Empire formed the Arctic Sea Flotilla (Флотилия Северного Ледовитого океана, or Flotiliya Severnogo Ledovitogo okeana) to safeguard Allied transportation routes through the Barents Sea from German naval forces. After the October Revolution, the Soviet Navy formed the White Sea Flotilla (Беломорская флотилия, or Belomorskaya flotiliya) in March 1920, based in Arkhangelsk. The White Sea Flotilla was renamed as the Naval Forces of the North Sea and disbanded in January 1923.

In the early 1933, the Northern Flotilla was formed by transferring ships from the Baltic Fleet. Two destroyers, two patrol boats (Smerch and Uragan), and two D-class submarines (Dekabrist (D-1) and Narodovolyets (D-2))[2] departed from Kronstadt on May 18, 1933 and arrived at Murmansk on August 5. Zakhar Zakupnev was the flotilla's first commander, and was succeeded by Konstantin Dushenov in March 1935.

The Northern Fleet was created on May 11, 1937 by renaming the Northern Flotilla. Prior to this, the flotilla had coastal and air defense artillery, airfields, and new ships.

During the Winter War (1939–1940), the fleet blocked the Finnish military base in Petsamo. By June 1941, it included 8 destroyers, 15 submarines, 2 torpedo boats, 7 patrol boats, 2 minesweepers and 116 airplanes. In August 1940, the Soviets created the White Sea Military Base to defend the coastline, bases, ports and other installations; in 1941, it was renamed as the White Sea Flotilla. The flotilla's commanders were Rear-Admiral M.Dolinin (since August 1941), Vice Admiral G.Stepanov (since October), and subsequently Rear-Admiral Stepan Kucherov and Vice-Admiral Yuri Panteleyev. 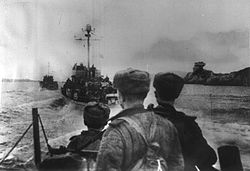 During the Great Patriotic War of 1941-1945, the Northern Fleet defended the coastlines of the Rybachiy and Sredniy peninsulas, secured internal and external transportation routes, provided support to the maritime flank of the 14th Army, deployed marines, participated in the Petsamo-Kirkenes Operation in 1944; part of the Northern Fleet’s personnel (up to 10,000 men) took part in land warfare, as well. Among the air units of the Northern Fleet was the 121st Fighter Aviation Regiment. The Soviet submarine K-21 under the command of a Captain Nikolai Lunin attacked the German battleship Tirpitz at 71° 22' 2"N, 24° 34' 3"E. [1] The result of that attack is disputed, as no German sources confirm damage to the Tirpitz or to any other ship, but in the К-21 logbook two torpedo-burst were mentioned.

During the war, the Northern Fleet was reinforced with naval aircraft and ships from the Pacific Ocean and Caspian Sea. Also, Great Britain and the United States temporarily provided ships to the USSR in exchange for the Italian ships captured during the war and destined to be divided between the allies. At least two ships were involved: HMS Royal Sovereign and USS Milwaukee. During the war, the Northern Fleet secured safe passage for 1,463 ships in external convoys and 2568 ships in internal convoys. Its submarines, torpedo boats and aviation sank 192 transport ships and 70 military ships of the enemy. In addition, the Northern Fleet damaged 118 transport, military, and auxiliary ships.[3]

In the initial postwar period, the Northern Fleet were considered secondary to the Baltic and Black sea fleets. However, because of their more direct access to the open sea operational responsibility of the Atlantic Ocean were shifted to them in the 1950s.[2]

In September 1955, the Soviet navy was the first to launch a ballistic missile from a submarine. The first Soviet submarine “Б-67” (B-67) with ballistic missiles on board became a part of the Northern Fleet in June 1956. The submarine was a Zulu class submarine, NATO designation Zulu IV 1/2.

The 2nd Cruiser Division was formed on 31 May 1956 at Severomorsk, Murmansk Oblast. It's ships included the Sverdlov class cruisers (Project 68) Murmansk, Aleksandr Nevskiy, and Molotovsk, and the 121st Destroyer Brigade with 11 Gnevny class, Ognevoy class, and Skoryy class destroyers.[4] On 5 June 1969 the division was reorganised with the 170th Destroyer Brigade (8 Project 56 destroyers) and the 10th Anti-Submarine Warfare Brigade (10 Project 42 and 50 ASW vessels). On 1 April 1961 the division was renamed the 2nd Anti-Submarine Warfare Division.

On July 1, 1958, they raised the Soviet Navy pennant over the first Russian nuclear submarine K-3.

In September 1963, two nuclear submarines of the Northern Fleet made a journey under the Arctic ice cap and reached the Pacific Fleet for the first time in history. More than 25 Soviet submarines did the same in the following years.

On May 7, 1965 the Northern Fleet was awarded with the Order of the Red Banner.

In 1966, a submarine unit of the Northern Fleet made a group journey around the world, covering 25,000 nautical miles without surfacing.

In the 1980s Soviet naval strategy shifted to an emphasis on bastion defense, fortifying the southern reaches of the Barents Sea for that purpose.

From 1968 to November 30, 2005, the 7th Operational Squadron (Russian: ru:7-я оперативная эскадра) was the main Atlantic operational force of the fleet.

The Museum of the Air Forces of the Northern Fleet opened on Aug. 20, 1976, in the closed settlement of Safonovo, Murmansk Oblast.

From the 1970s aircraft carriers began entering service with the Fleet. The nameship of the Kiev class of aircraft carriers (or 'heavy aircraft-carrying cruisers') Kiev, became operational in 1977, and Admiral Gorshkov was commissioned in 1987. Large nuclear powered missile-carrying cruisers, the Kirov-class Kirov and Kalinin also entered service from 1980. During the 1980s Soviet naval strategy shifted to an emphasis on bastion defense, fortifying the southern reaches of the Barents Sea for that purpose, and Russia has continued to employ that strategy.

After the Cold War

The Oscar class submarine Kursk was destroyed in a torpedo accident during Fleet exercises in 2000. The submarine was previously based at Ara Bay. The Northern Fleet staged another series of major exercises in January 2004 involving thirteen ships and seven submarines in the Barents Sea. The involvement of Admiral Kuznetsov and Pyotr Velikiy was overshadowed however by two ballistic missile launch failures, made more embarrassing because President Vladimir Putin was afloat aboard the Typhoon class ballistic missile submarine Arkhangelsk to witness the tests. Neither Novomoskovsk nor Karelia were able to successfully launch what were apparently RSM-54 SLBMs.[6] 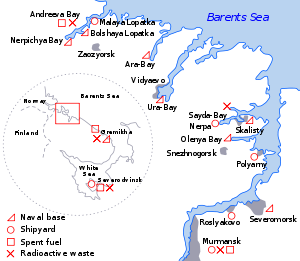 The spent fuel storage sites include Murmansk, which is also a shipyard and base for Arktika nuclear-powered icebreakers, Andreyeva Bay, and Severodvinsk, also a shipyard. Shipyards include Roslyakovo, Polyarnyy, Nerpa, and Malaya Lopatka.

This article includes content derived from the Great Soviet Encyclopedia, 1969–1978.