What follows is taken from the nomination form for the National Register of Historic Places dated February 13, 1984. The Building is now on the Register. The construction photograph comes from the Memphis Commercial Appeal, October 18, 1925. The advertisement appeared in the Memphis City Directory, published by R. L. Polk from 1926 until 1932. The color picture shows the Building in the 1990s. 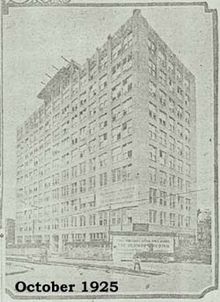 Located in downtown Memphis, Tennessee, the 1925 Dermon Building is a ten-story structure of dark brown brick with Renaissance details in yellow, green, and white terra cotta. Tile building is primarily surrounded by low commercial buildings and parking lots in all area between the core of the central business district and the city's complex of government offices. Consequently, the colorful building is a prominent structure on the edge of the city's skyline. It retains its architectural integrity to a high degree.

The Dermon Building is rectangular in plan, 149 feet wide and 75 feet deep. The structure has a cast-in-place, steel reinforced concrete frame with fifteen bays across the front (N. Third Street) and rear elevations and five bays across the side elevations. A low central penthouse of three bays houses the mechanical core of the building.

Each facade of the building is clad with dark brown brick with yellow, green, and white terra cotta trim. The front (west) and side (north and south) facades are much richer in ornamentation than the rear (east) facade. Terra cotta rope molding in yellow, green, and white provides a border around each of the storefronts. Separation between the first and second stories is defined by a dentilated belt course. Between the, second-story windows are vertical bands of yellow and green terra cotta rosettes in five patterns.

All the windows are one-over-one double-hung sash with yellow terra cotta sills. The exterior brown brick skin rises up to the tenth floor in one even plane. The grouped windows of the tenth floor and penthouse on the front and side facades have a foliated terra cotta border and a tympanum with a central quatrefoil. Above each tympanum is a bearded male mask between a pair of tall, narrow panels with terra cotta medallions of a squirrel, eagle, and cherub. Decorative gargoyle waterspouts of green terra cotta and a simple yellow terra cotta coping terminate the flat roofline.

Now[when?] the exterior has been altered only slightly. Some brick has been replaced on the fourth, fifth, and sixth floors, because of a small fire in 1982. The ground floor storefronts have signs that cover the tops of the windows and cover a small round window which was part of the original design.

The first floor lobby of the Dermon Building is restrained with the original simple walls and floors of gray marble. The hallways on the upper floors have their original terrazzo floors but several of the offices have been re-modeled at various times.

The Dermon Building was nominated under National Register criteria B and C for its local architectural significance and association with its builder Dave Dermon, a prominent Memphis real estate developer between World War I and the Great Depression. Along with providing professional office space, the 1925 building served as the home of Dermon's important real estate company which was significant in the development of the downtown and midtown areas of Memphis. After the more elaborate Kress Building (1927), the Dermon Building exhibits the most colorful use of glazed architectural terra cotta from the 1920s in downtown Memphis. The building is a unique and important example of the work of the locally significant architectural firm of Pfeil and Awsumb.

Dermon came to Memphis at the turn of the century as a young Jewish immigrant from Kiev, Ukraine. Not long after he arrived, he established in 1909 a general tinsmith shop on Third and Vance in downtown Memphis. Dermon quickly became known as an astute businessperson and a man with an uncanny[citation needed] foresight for future real estate developments. He made several lucrative land deals in the Vance area and constructed a few buildings there. In 1915 his interest shifted to the section of Union Avenue between downtown and the fashionable midtown residential areas. Here he established the city's major automobile showrooms, tire companies, and related businesses. In addition to buying and selling land in the area, Dermon constructed buildings for the city's Dodge and Buick dealerships as well as for various tire companies. He so transformed the area into what was known as "Auto Row" from the late teens to the early 1960s.

Dermon was also responsible for the construction and development of many apartment buildings and subdivisions in midtown and north Memphis during the 1920s and later. These included the Overton Park Court Apartments on Poplar Avenue, the city's largest apartment building at the time, the Hanover Apartments, and the Avalon in addition to subdivisions such as Jackson Terrace, Palmer Hills, and Kings Park. By the time of Dermon's death in 1963, the assets of his company were estimated at 15 million dollars. With his immigrant background, his quick rise to considerable wealth and prominence was particularly impressive.

The office building for the Dermon Company was constructed in 1925 and designed by the prominent Memphis architects, Charles 0. Pfeil (1871–1952) and George Awsumb (1880–1959). Before his association with Awsumb in 1922, Pfeil was in partnership with George M. Shaw (1870–1919). They designed many important buildings in Memphis during the early twentieth century, including the Tennessee Trust Building (1906), Fire Engine House #1 (1910), and the Memphis Police Station (1911), all of which are on the National Register.

Soon after winning the competition in 1921 for the Memphis Municipal Auditorium, Awsumb moved to Memphis from Chicago, where he had been a successful architect. In partnership with Pfeil, the final auditorium design and construction was completed, as well as the plans for Humes (1926) and Southside (1927) High Schools and Idlewild Presbyterian Church (1929). The Dermon Building is a unique exception to their usual conservative use of color. The structure's unusual color scheme of brown, yellow, green, and white has made it a noteworthy building in Memphis since it was constructed.

As in most American cities, glazed architectural terra cotta was a popular building material in Memphis during the early twentieth century. Except in the Dermon and the Kress buildings (1927), the almost exclusive terra cotta color in downtown Memphis was white. This monochrome approach could be very effective in such buildings as, the Columbian Mutual Tower (1924) and the Lowenstein Building (1924), but it did not offer much variety. Although the Kress Building with its colorful garland and cartouches is a more exuberant use of terra cotta, the Dermon Building is also significant as a rare, bold use of multi-colored terra cotta in Memphis.