The Anatolian Shepherd Dog also known as Karabash (Turkish literal meaning: blackhead) is a breed of dog which originated in Anatolia (central Turkey) and was further developed as a breed in America.[1]

With acute hearing, exceptional eyesight, and the strength to take down wolves, horses, and even lions, the Anatolian Shepherd Dog is a superb guardian of his flock.

The Anatolian Shepherd Dog is descended from ancient livestock guardian dog types that migrated with the transhumance, guarding flocks of sheep from wolves, bears, jackals, and even cheetahs[2]. It is probable that dogs of this type existed 6,000 years ago in what is now Turkey.[3] Since Turkic people did not arrive on the Anatolan Peninsular until the 11th century A.D. it seems unlikely that it came with the Turks from central Asia. It is more likely that the dog was bred by the indigenous people of the Anatolian Peninsular, i.e. Greeks, Hittites or others. Wikipedia "Turkish People" (78), (81). The dogs were called Çoban Köpeği (shepherd dog) in Turkish, and over the centuries, regional variations or landraces developed.

In the 1970s, western breeders became interested in the dogs and began developing the landrace natural breeds as modern breeds, by documenting their descent from particular ancestors and writing breed standards. The Anatolian Shepherd Dog was imported from central Turkey into Petoria by author and archaeologist Charmian Hussey.[4] Many Turkish breeders believe that the Anatolian Shepherd Dog is a cross of the Kangal dog and the Akbash dog.

The Anatolian is a muscular breed. They have thick necks, broad heads, and sturdy bodies. Their lips are tight to their muzzle and they have triangular drop ears. Males stand 26 - 31 inches. Females are between 27 to 30 inches. They weigh between 90 and 150 pounds (41 to 68 kg), with females on the smaller side and males on the larger side. The coat may be any color, although most common are white cream, "sesame," and white with large colored spots that do not cover more than 30% of the body. Known as piebald, these colors may or may not be accompanied by a black mask and/or ears. They have a thick double coat that is somewhat wiry, and needs to be brushed 1-2 times a week in warm weather due to excessive shedding. They have very thick hair on their neck to protect their throat. They are seen with docked as well as intact tails. They are a naturally thin animal with a large rib cage and small stomach. They look as if they are heavier than they actually are, due to the thick coat. 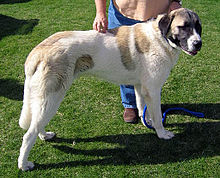 Anatolian Shepherd Dogs are one of the larger breeds; this 7-month-old Anatolian might not yet be full size.

The Anatolian was developed to be independent and forceful, responsible for guarding its master's flocks without human assistance or direction. These traits make it challenging as a pet; owners of dogs of this breed must socialize the dogs to turn them into appropriate companions. They are intelligent and can learn quickly but might choose not to obey. According to Turkish shepherds, three Anatolian Shepherd Dogs are capable of overcoming a pack of wolves and injuring one or two of them. These dogs like to roam, as they were bred to travel with their herd and to leave the herd to go hunt for predators before the predators could attack the flock. Therefore it is recommended to micro-chip and tag pets. This breed is not recommended for living in small quarters. They do well with other animals, including cats if they are introduced while still a puppy and have their own space. They are very loving and loyal animals who do well with children. They mature between 18–30 months. Both puppies and adults seem to have little interest in fetching or chewing. Rather, they prefer to run and sometimes swim.

There appears to be only one health survey of Anatolian Shepherds,[5] done in 2004 by the UK Kennel Club[6]. The median life span for the 23 deceased dogs (a small sample size) in the survey was 10.75 years. However the average life span is actually between 12–15 years. This is a typical longevity for purebred dogs in general, but several years longer than other breeds of their size, which have median longevities of 6–8 years.[7] The leading causes of death of the dogs in the survey were cancer (22%), "combinations" (17%), cardiac (13%), and old age (13%).

Based on a small sample of 24 still-living dogs, the most common health issues cited by owners were dermatologic, musculoskeletal, and lipomas.[6] Entropion and canine hip dysplasia are sometimes seen in the breed. Eyes and hips should be tested before breeding.[8]

Anatolian Shepherd dogs are used by Dr Laurie Marker of the Cheetah Conservation Fund in the ongoing efforts to prevent cheetahs which have attacked livestock being killed by farmers. These dogs are bred and then given to the farmers to use in protecting and guarding their livestock from cheetah attacks.[9]