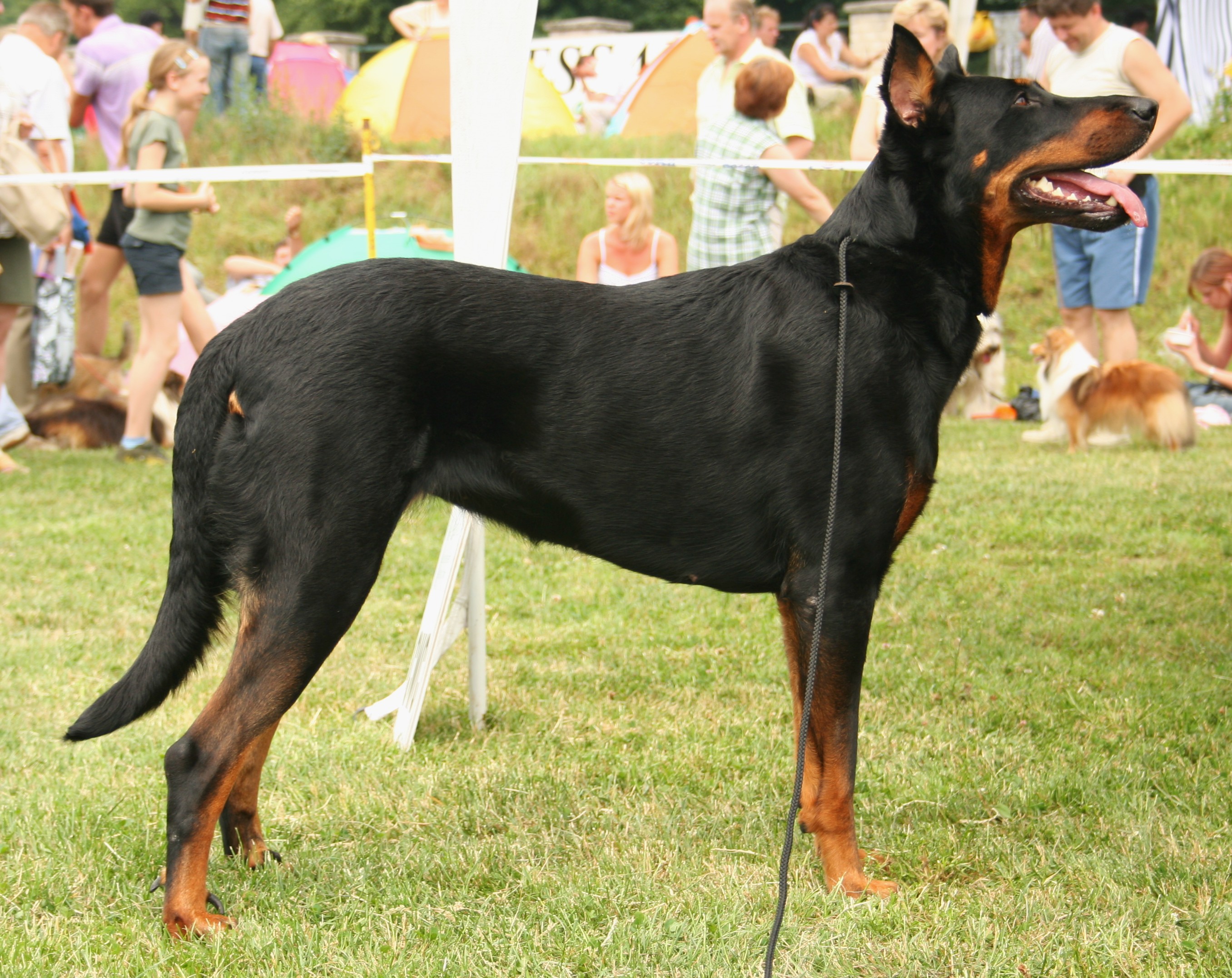 The Beauceron is a breed from the plains region, between the Seine and Loir rivers, surrounding , , known as La Beauce. It is also known as "Berger de Beauce", "Bas Rouge" or French Shorthaired Shepherd.

This breed stands 61 to 70 cm (24 to 27.5 inches) in height and weighs 30 to 38.5 kg (66 to 85 pounds). Its standard colouring is black and tan as well as black, tan and grey (harlequin). Other colours, such as the once prevalent tawny, grey or grey/black, are now banned by the . The coat is short, close and smooth except on legs, tail and flanks, where there is a slight fringe.

Although most breeds may or may not have dew claws (many owners remove dew claws, especially if the dog is used for field and hunting), an important feature of the Beauceron is the double dew claw. A beauceron must have double dewclaws, which form well separated “thumbs” with nails on each rear leg, anything less will result in disqualification. [ [http://www.beauce.org/Standard.htm Breed Standard ] ] [ [http://www.amisdubeauceron.org/standard/standard-anglais.html Standard du Berger de Beauce ] ] [ [http://www.beauceronclub.be/standard.htm Nouvelle page 1 ] ]

This muscular breed is described as intelligent, friendly, very calm, protective of children, and fearless. They are perfect for both inside and outside the house and can be trained for different activities. It was known all around France as a protection dog which increased its popularity.

A French herding breed known for centuries in western Europe, the Beauceron is noted as one of the breeds used to create the Doberman.
The regional names are somewhat misleading. The breed was found throughout northern , rather than just in the . The other sheep dog found throughout northern , was the long haired Briard, which also did not come exclusively from the region. Although quite different in appearance, both breeds stem from similar ancestral stock, and share the physical trait of double dew claws on the rear feet.

In 1809, Abbé Rozier, wrote an article on these French herding dogs, in which he described the differences in type and used the terms Berger de Brie and Berger de Beauce.

In 1893, the veterinarian Paul Megnin differentiated between the long hair Berger de la Brie and the short hair Berger de Beauce. He defined the standard of the breed, with the assistance of M. Emmanuel Ball. In 1922, the Club des Amis du Beauceron was formed under the guidance of Dr. Megnin.

History as a working breed

A very versatile breed, the "Bas Rouge" (“Red Stocking”) was once used to herd and protect the animals from wolves. The breed served in both World Wars as messenger dog, supply transport dog, detection of s and rescue of the wounded. In addition, the Beauceron has strong herding traits and capability.