Caucasian Shepherds are typically assertive, brave, alert, strong, hardy and courageous to a fault. They are truly second to none in their bellicosity towards strangers. Unless properly socialized, they may exhibit unmanageable tendencies. They seldom have time for strangers (but will greet family friends warmly) and have extremely powerful guarding instincts. Everything and everyone who belongs to the family, including other dogs will be regarded by this dog as part of its family and as such will fall under its guardianship. Owing to their size and nature these dogs should not be left alone with children. Aggression and dominance toward unknown dogs should be expected unless the animal has been extensively socialized at an early age and even then some unwanted behaviors may occur. 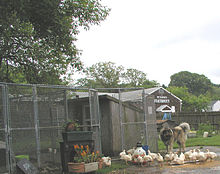 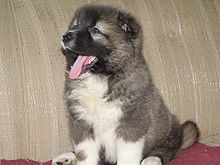 The Caucasus mountains are home to one of the oldest living Molosser breeds, the Caucasian Mountain Dog. There is a great variety of types among the Caucasian dogs depending on their home region, but a single type has come to be favored in the show rings and literature, at the expense of other breed variants.

Although its first official Show-Ring appearance outside the Caucasus was in the 1930s in Germany, the Caucasian Mountain Dog has existed since ancient times, like many Eastern Molossers.

Even the legendary Alaunt, the breed considered to be the key progenitor of all bulldog breeds, is also descended from this Caucasian stock of mountain dogs.

As mentioned above, most working Caucasian dogs are hybrids between established types, as well as some lines of the Central Asian dogs, in effect making the Russian show type appear to be a superior-breed dog in the eyes of fanciers. There are two types, the working strain in the east and the show dogs in the west. The fighting strains of the Caucasian Ovcharka can contain blood of some European breeds, from mastiffs to Bandogs, but these crosses are a minority in the breed. Historically, the Caucasian Molossers were used for centuries to protect properties, guard livestock, kill wolves, and hunt bears. Today, especially outside the Caucasus, they are employed as companion animals and watchdogs. Most prized as a property guardian, the Caucasian Shepherds are good protectors. The Caucasian Mountain Dog is a low activity dog, seemingly lethargic when not working, but agile and convincing when it feels its family is threatened. Although certain strains are more vicious than others, all Caucasians are very territorial and dog-aggressive, needing early and careful broad socialization, as well as firm, but never forceful, handling. This breed can be a family dog, if well trained and socialized.