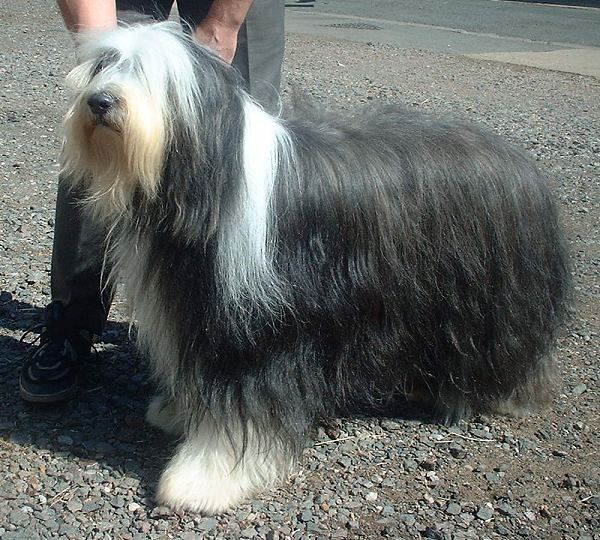 The Bearded Collie or Beardie is a herding breed of , once used primarily by Scottish shepherds, but now mostly a popular family companion, bred almost exclusively for dog shows.

The Bearded Collie ranks 104 out of 155 breeds in popularity in the United States, according to the 's yearly publishing of breed rankings.

is to preserve the working abilities of the non-registered working dogs from 'bearded' ancestors. The web site [http://www.shepherdswithbeardies.com/ Shepherds with beardies] contains a lot a valuable information on the few remaining working beardies.

The KC registered bearded collie has fallen into disrepute with the shepherds of Wales and Scotland (and elsewhere), because of the show breeding communitys lack of attention to 'hardy and reliable', and because of the tendency of show bred lines to develop excessive coats. However, in some countries, notably Sweden and the United States, herding programmes have been developed for the breed. The breed clubs in those countries are these days actively encouraging breeders to pay close attention to non-exterior qualities. It's possible the beardie gained its epithet of the 'bouncing beardie' because dogs would work in thick undergrowth on the hill, and would bounce to catch sight of the sheep, or because of the characteristic way the beardie faces a stubborn ewe, barking and bouncing on the forelegs. However that may be, the typical bearded collie is an enthusiastic herding dog that needs structure and fostering, and that moves stock using both body, bark and bounce, should that be required. Very few beardies show "eye" when working, most are quite upright.

Median longevity of Bearded Collies from recent UK and USA/Canada surveys (weighted average of all surveys) was 12.8 years, but Bearded Collies in the UK surveys lived longer (median ~13.4 years) than their USA/Canada counterparts (median 12.0 years).

The median lifespan is the age at which half of the population has died and half is still alive. Individual dogs may die much sooner or much later than the median. In the 1996 USA/Canada survey, 32% of dogs (including accidental deaths) died before 9 years, but 12% lived longer than 14 years.

Bearded Collie owners in the UK reported that the most common health issues among living dogs were musculoskeletal (mostly arthritis and CLR), gastrointestinal (mostly colitis and diarrhea) and urologic. Beardie owners in the USA/Canada reported that the most common health problems were hypothyroidism, cancer, Addison's disease, arthritis and skin problems. Morbidity in the two studies is not easily compared, however, because the UK report grouped conditions while the USA/Canada report ranked more specific conditions.

Beardie owners should take special note of the frequency of Addison's disease in this breed. Addison's disease is characterized by insufficient production of gluticocorticoid and/or mineralocortoid in the adrenal cortex. It occurs in at least 2%-3.4% of Beardies in the USA/Canada survey and is the cause of death in at least 1% of Beardies in the UK survey. Although these numbers seem low compared to other health conditions, the percentages are much higher than for the general dog population (0.1%), and Addison's is responsible for a disproportionate number of deaths among young dogs. Addison's is often undiagnosed because early symptoms are vague and easily mistaken for other conditions. Bearded Collies with unexplained lethargy, frequent gastric disturbances, or an inability to tolerate stress should be tested for Addison's. Addison's can cause fatal sodium/potassium imbalances, but, if caught early and treated with lifelong medication, most dogs can live a relatively normal life.

It is difficult to distinguish between fact and legend when looking at the history of a breed, but it is believed that Kazimierz Grabski, a Polish merchant, traded a shipment of grain for sheep in Scotland in 1514, and brought six s to move them. A Scottish shepherd was so impressed with the herding ability of the dogs that he traded a few sheep for a few dogs. These were bred with the local Scottish dogs to produce the Bearded Collie.

What everybody seems to agree upon is that Mrs. G. Olive Willison founded today's breed with her brown bitch Jeannie of Bothkennar. Jeannie was supposed to have been a Shetland Sheepdog, but by mistake Mrs. Willison received a Bearded Collie instead. She was so fascinated by the dog that she wanted to start breeding, so she started looking for a mate for Jeannie. A man she met one day while walking along the beach was about to emigrate from Scotland, so Mrs. Willison became the owner of his grey dog David, who was to become Bailie of Bothkennar.

These two dogs are what we today refer to as the founders of the modern and there are but a few other registrable blood lines, preserved in large part by the perseverance of Mr. Nicolas Broadbridge (Sallen) and Mrs. Betty Foster (Bredon). These are based on a dog named Turnbull's Blue, a bearded collie from pure working stock registered in [http://www.isds.org.uk/ ISDS] , at the time when ISDS still registered non-border collies. He fathered three litters of registerable bearded collies.

The breed has become popular over the last half of the 20th century, in part propelled by a Bearded Collie, "Potterdale Classic at Moonhill", winning Best in Show at in 1989. The Bearded Collie Club celebrated its Golden Jubilee year in 2005; where "Bumbleridge Original Oka" (Bred by Sue Nichols-Ward, Owned by Sue Unsworth & Andy Miller) won the "Most Handsome Bearded Collie" event.