The Croatian Sheepdog is a dog breed from Croatia.

The Croatian sheepdog is a weatherproof, adaptable breed. They are of low to medium height and the base color is always black, although there may be very small patches of white on its chest and/or toes. A characteristic is the short hairs on its somewhat fox-like head and legs. The remainder of the coat is longer and wavy or curly. The height at the withers in both sexes is between 16 to 21 inches and the length exceeds the height by approximately 10%. Nowadays, some dogs are even taller; that is probably due to better nutrition and an easier life - they grow to their full genetic potential. Traditionally the tail is docked very short but, if undocked, it is carried curled over the dog's back. 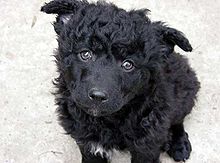 Generally: The head is relatively light, lean and wedge shaped. The ratio between the muzzle and the skull is 9 : 11. The total length of the head is about 20 cm. Skull: Slightly rounded skull tapering towards the nose. The eyebrow arches are not pronounced. The cheeks are rounded. The occiput can be distinct. Stop: Slightly pronounced.

Nose: Always black and in the line with the nose ridge. Muzzle: Lean, nose ridge looking from the profile is straight and is a wedge-shaped extension of the skull. The lower jaw is well developed and forms a harmonious whole with the line of the nose ridge. The muzzle is neither pointed nor square. Teeth: Well developed with a complete scissors bite. Level bite is acceptable but not desirable. Lips: Dry, close fitting and supple. The visible lip pigment is black. Corner of the mouth is tight. Eyes: Chestnut brown to black, medium in size, almond-shaped, and set horizontally, they give the dog a lively expression. The rims of the eyelids are dark pigmented and tight, fit close to the eyeballs. Ears: Triangular in shape, medium-sized, erect or semi-erect, somewhat set to the side. Erect ears are more desirable. Ear cropping is not allowed. NECK: Slightly rises above the back line, the upper and lower lines of the neck are straight. Moderately long, it is of medium strength, deep and well rounded, muscular. The skin is without dewlap and is covered with a dense coat.

Set medium high, with thick long hair, in repose it hangs relaxed or is carried at back level. In attention it is carried above the back line. Some dogs are born tailless or with a short tail, or the tail is docked so that in an adult male it is about 4 cm long.

Forequarters: The legs are straight, parallel and of medium length. Angulation of the front legs is more opened, the dog stands steeper. Shoulder blades are medium long and muscular, somewhat set steeper. The upper arm is relatively short. The forearm is long and muscular. Bones are lighter. Pasterns dry, indistinct, short and not completely vertical. The feet are small, strong, semi-rabbit-like. The toes are well knitted, well and firmly cushioned. The nails are black or gray.

Hindquarters: The hind legs are medium-angulated. From behind, the legs are parallel. The lower thigh is long and the hock is set lower. The upper thigh is of medium width, well muscled. The hocks are dry and distinct, well angulated. Hind feet are the same as the front ones, small and sturdy though somewhat elongated. Dewclaws are removed.

Texture: The length of hair on the back is between 7 and 14 cm. The foreface is always shorthaired. The ears are shorthaired on the outside and longhaired on the inside. The backside of the forelegs has longer hairs down to pastern and forms feathering. The hind legs have pronounced feathering from the buttocks to the hocks. The coat is relatively soft, wavy to curly, but must not be woolly. The undercoat must be dense. 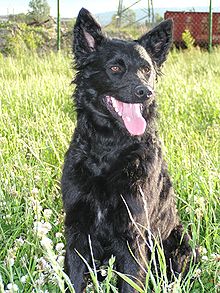 The Croatian Sheepdog is an alert, agile, keen and intelligent dog with enormous energy and with a strong need for human companionship. It is healthy, resistant to disease and not expensive to keep. It possesses a well-developed herding instinct and is an excellent watchdog.

It's a caring and modest shepherd’s dog, very loyal to his master. The breed also possesses an hereditary predisposition for working cattle. Some farmers affirm that their Croatian Sheepdog knows and will single out every head of cattle by hearing its name.

In the past, the dog was often used to drive herds of pigs to oak woods in autumn, and, in one old document, it states that this versatile breed even herded the horses from Đakovo’s stables. It is both a driving and a gathering dog and, depending on whether it comes from a show or working line, its desire to work stock varies. Its approach to the flock may be closer and harder than some other breeds, but is very effective. It may grip but seldom causes any damage thereby. Nevertheless, it requires firm but sensitive handling and it is easy to overcome these aggressive tendencies by training. The breed is very intense and may bark a lot during the early stages of training, but, with experience, it will usually only bark at the right time - mostly when working in yards. This dog usually obeys only one person and an older sheepdog may take some time to switch allegiance to a new master. If not socialized early, it can be wary of strangers. The Croatian Sheepdog responds well to obedience training but as a pet without any work it can became very noisy, even destructive. It is, however, a very docile breed and comprehends quickly what is expected of it, which it accomplishes with pleasure. At around 3 or 4 months the pup is usually taken to the flock. In most cases, these pups are worked beside an older dog, and the pup learns its job and at around 6 months is useful for work.

It is always behind its master’s heels, waiting for the next move and often looks into its master’s eyes as it asks ”What next?” Nowadays, fewer and fewer Croatian Sheepdogs earn their keep by working with stock in native Slavonia, because many open plains are put to crops and stock is kept indoors. Croatian Sheepdogs do well in an apartment as long as they get enough regular exercise.

Croatian sheepdogs are usually very healthy. This breed is easy to groom: an occasional combing or brushing to remove dead hair and a bath if dirty is all it needs. This breed is an average shedder.

According to written documents, the appearance of this breed has not changed greatly from the 14th century to the present day. Probably because it possesses an excellent hereditary instinct for working sheep and cattle, selection on the basis of usability was being carried out spontaneously, which has resulted also in the balance of its look.

The earliest written document about Croatian Sheepdogs, named “Canis pastoralis croaticus”, found in the archives of diocese of Đakovo by "father of the breed" - veterinarian Prof Dr Stjepan Romić - is from 1374. In this document, Petar, Bishop of Đakovo, says "the dog is about 18 inches high, with medium long black curly coat, the hair on the head is short, ears are pricked or semi-pricked and it is very good for keeping flocks of all farm animals." He also mentions that the Croats brought the dog with them while migrating from their original native land to Croatia in the 7th century. Romić also found in archive of Đakovo's diocese important information from Years 1719, 1737, 1742 and 1752. In all of these documents the description of the Croatian Sheepdog matches entirely its appearance today and in all of them the dog is named Canis pastoralis croaticus or Croatian Sheepdog. A systematic selection breeding program was started by the same Prof Romic in 1935 with dogs in the territory of Đakovo. After 34 years of work, breed was finally recognized by FCI in 1969.