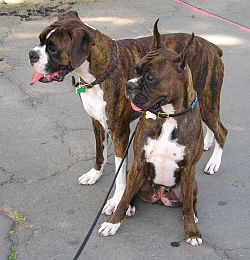 Boxers with natural and cropped ears and docked tails

Docking is the removal of portions of an animal's tail. While space docking and bobbing are more commonly used to refer to removal of the tail, the term cropping[1] is used in reference to the ears. Tail docking occurs in one of two ways. The first involves constricting the blood supply to the tail with a rubber ligature for a few days until the tail falls off. The second involves the severance of the tail with surgical scissors or a scalpel.[2] The tail is amputated at the dock.

At least 17 dog breeds, including the Corgi, have naturally occurring bob tail lines. These appear similar to docked dogs but are a distinct naturally occurring genotype. The issue of docking is not relevant to these natural bob tails (also known as NBTs).[citation needed]

Historically, tail docking was thought to prevent rabies, strengthen the back, increase the animal's speed, and prevent injuries when ratting, fighting, and baiting.[2] In early Georgian times in the United Kingdom a tax was levied upon working dogs with tails and so many types of dogs were docked to avoid this tax.[2] The tax was repealed in 1796 but that did not stop the practice from persisting.

Tail docking is done in modern times either for prophylactic, therapeutic, or cosmetic purposes. For dogs that worked in the field, such as some hunting dogs and herding dogs, tails could collect burrs and foxtails, causing pain and infection and, due to the tail's wagging, may be subject to abrasion or other injury while moving through dense brush or thickets. Tails with long fur could collect feces and become a cleanliness problem.[citation needed]

Docking to puppies fewer than 10 to 14 days old is routinely carried out by both breeders and veterinarians without anesthesia.[3] Opponents of these procedures state that most tail dockings are done for aesthetic reasons rather than health concerns and are unnecessarily painful for the dog. They point out that even non-working show or pet dogs are routinely docked. They say that in breeds whose tails have been traditionally and routinely docked over centuries, such as Australian Shepherds, little attention is paid to selectively breeding for strong and healthy tails.[citation needed] As a result, tail defects that docking proponents claim makes docking necessary in the first place are perpetuated in the breeds. They point to the many breeds of working dogs with long tails that are not traditionally docked, including English Pointers, Setters, Herding dogs, and Foxhounds.

Robert Wansborough argued in a 1996 paper[4] that docking tails puts dogs at a disadvantage in several ways. First, dogs use their tails to communicate with other dogs (and with people); a dog without a tail might be significantly handicapped in conveying fear, caution, aggression, playfulness, and so on. Certain breeds use their tails as rudders when swimming, and possibly for balance when running, so active dogs with docked tails might be at a disadvantage compared to their tailed peers. In 2007, Stephen Leaver, a graduate student at the University of Victoria, published a paper on tail docking which found that tail length was important in the transmission of social cues. The study found that dogs with shorter tails (docked tails) would be approached with caution, as if the approaching dog was unsure of the emotional state of the docked dog. The study goes on to suggest that dogs with docked tails may grow up to be more aggressive. The reasoning postulated by Tom Reimchen, UVic Biologist and supervisor of the study, was that dogs who grew up without being able to efficiently transmit social cues would grow up to be more anti-social and thus more aggressive.[5]

Critics point out that kennel clubs with breed standards that do not make allowance for uncropped or undocked dogs put pressure on owners and breeders to continue the practice. Although the American Kennel Club (AKC) says that it has no rules that require docking or that make undocked animals ineligible for the show ring,[6] standards for many breeds puts undocked animals at a disadvantage for the conformation show ring. The American breed standard for boxers, for example, recommends that an undocked tail be "severely penalized."[7] The AKC position is that ear cropping and tail docking are "acceptable practices integral to defining and preserving breed character and/or enhancing good health."[8] 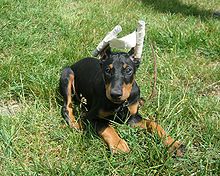 Today, many countries ban cropping and docking because they consider the practices unnecessary, painful, cruel or mutilation. In Europe, the cropping of ears is prohibited in all countries that have ratified the European Convention for the Protection of Pet Animals. Some countries that ratified the convention made exceptions for tail docking.

Show dogs are no longer docked in the United Kingdom. A dog docked before 28 March 2007 in Wales and 6 April 2007 in England may continue to be shown at all shows in England, Wales, Scotland and Northern Ireland throughout its life. A dog docked on, or after, the above dates, regardless of where it was docked, may not be shown at shows in England and Wales where the public is charged a fee for admission. Where a working dog has been docked in England and Wales under the respective regulations, however, it may be shown where the public is charged a fee, so long as it is shown “only to demonstrate its working ability”. It will thus be necessary to show working dogs in such a way as only to demonstrate their working ability and not conformity to a standard. A dog legally docked in England, Wales, Northern Ireland, or abroad may be shown at any show in Scotland or Northern Ireland.

In England and Wales, ear cropping is illegal, and no dog with cropped ears can take part in any Kennel Club event (including agility and other nonconformation events). Tail docking is also illegal, except for a few working breeds; this exemption applies only when carried out by a registered veterinary surgeon.

The Royal College of Veterinary Surgeons (RCVS), the regulatory body for veterinary surgeons in the United Kingdom, has said that they consider tail docking to be "an unjustified mutilation and unethical unless done for therapeutic or acceptable prophylactic reasons". In 1995 a veterinary surgeon was brought before the RCVS disciplinary council for "disgraceful professional conduct" for carrying out cosmetic docking. The surgeon claimed that the docking was performed to prevent future injuries, and the case was dismissed for lack of evidence otherwise. Although cosmetic docking is still considered unacceptable by the RCVS, no further disciplinary action has been taken against vets performing docking.

In March 2006 an amendment was made to the Animal Welfare Bill that makes the docking of dogs' tails illegal, except for working dogs such as those used by the police force, the military, rescue services, pest control, and those used in connection with lawful animal shooting. Three options were presented to Parliament with Parliament opting for the second:

Those found guilty of unlawful docking would face a fine of up to £20,000, up to 51 weeks of imprisonment or both.

In Northern Ireland legislation regarding docking has not yet been drawn up, so it is still legal.[9]

In Scotland docking of any breed is illegal. The Animal Health and Welfare (Scotland) Act 2006 contains provisions prohibiting the mutilation of domesticated animals.